Live From the US Open: SMT Serves Up Serve Clock, IPTV, Automated Graphics, Much More

Much of the new technology should benefit broadcasters

SMT is once again one of the busiest vendors on hand at the US Open, providing a cavalcade of technology to serve the USTA, broadcasters, spectators, athletes, and media onsite at the USTA Billie Jean King National Tennis Center (NTC). In addition to providing the much discussed serve clock, SMT — now in its 25th year at the Open — is providing scoring systems, scoring and stats data feeds, LED scoreboards, TV interfaces, IPTV systems, and match analysis.

“This event, just like any Grand Slam, is becoming a three-week event,” says Olivier Lorin, business development manager, SMT. “We have more and more recipients asking for data. Today, we’re actually sending 19 different data feeds to recipients for their own platform. Obviously, we have to get the authorization from the USTA, but then they use that for whatever.”

Countdown to the Serve
An on-court digital clock, similar to the shot clock in basketball and the play clock in football, counts down the allotted 25 seconds before a player must begin the serve (previously, the 20-second clock was visible only to the chair umpire). 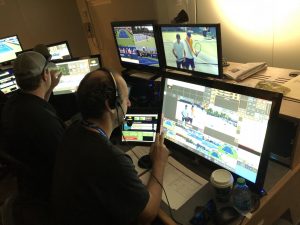 An SMT touchpad (the tablet seen here in lower middle) is located at each of ESPN’s automated-production workstations for the 16 outer courts. Nearly all graphics elements, including the scorebug and lower-thirds, are fully automated.

After the USTA announced plans to display a countdown clock for this year’s tournament, SMT introduced the clock at ATP and WTA events leading up to the Open — most recently, in Winston-Salem, NC, and Cincinnati — to help players acclimate to it.

“The USTA has been looking to do the serve clock at the US Open for a few years, starting in 2016 with the Juniors and then the qualifiers as an experiment, which all went very well,” says Lorin. “The Australian Open and the French Open also did it in quallies, but the US Open wanted to be the first [Grand Slam] to do this for all events, and we were able to work with them to make that happen.”

The clock, visible to players and spectators alike, begins to tick down immediately after the chair umpire announces the score. The umpire will issue a time violation if the player has not started the service motion at the end of the countdown. The first time the clock hits zero before a player begins the motion, the player receives a warning. For every subsequent time, the player loses a first serve. SMT is driving umpire scoring on all 16 courts and offsite for Junior Qualifying (eight courts).

Lorin sees a benefit to TV in the five-minute warmup clock and the serve clock: “At least seven minutes [is saved], so the match is going to [end] on time more often.”

Serving the Media: IPTV and CCTV
SMT is also responsible for the infrastructure for the USTA’s CCTV, IPTV, and Media Room. The IPTV system for the Media Center at this year’s US Open is now “browser-independent.” It allows users to select and view up to five streams/videos at one time from any of the digitally encoded channels available on the 13-channel CCTV system. In addition, the system allows access to archived player interviews. The IPTV system also includes real-time scores, match stats, draws, schedule, results, tournament stat leaders, US Open history, and WTA/ATP player bio information.

“It’s a very slick interface, and the USTA has been very positive about it,” says Lorin. “Today, it is still under a controlled environment here at the US Open, but, if the US Open wanted to make this open to anybody on the outside, we could easily provide a solution for them to log in and have the same information, with the exception of live video.”

Automation Is Key to New Outer-Courts Coverage
A fixture at live-sports-broadcast compounds, SMT is also providing a variety of services to domestic-rights holder and host broadcaster ESPN, as well as other broadcasters onsite. ESPN is deploying an SMT automated-graphics interface as part of its new automated-production system for outer-court coverage, which relies on a Fletcher Tr-ACE motion-detecting robotic camera system and SimplyLive’s ViBox all-in-one production system.

An SMT touchpad at each of the 16 workstations is used only during prematch coverage. All other graphics elements, including the scorebug and lower-thirds, are fully automated, and informational elements are triggered by preconfigured settings in SMT’s data feed (for example, 10 total aces or 10 unforced errors).

“The beauty of our system is that everything is automated and driven by the score notification of the umpire’s tablet,” says Lorin. “We have built up prematch graphics so we know that, when the umpire hits warmup on the tablet, a bio page for both players and a head-to-head graphic will appear, and then they’ll go to the match. When the match starts, the system is just listening to the score notifications, and we have built-in notifications for five aces and things like that. The only thing that is manual and left to the producer for that court is the set summary and the match summary for statistics.”

“One of the big things is, we rebranded the US Open package for 2018 with a new logo, a new font, and a new background,” says Lorin. “As a result, we had to apply those design changes across all the platforms we are serving. One of the things we try to do more and more in the video production is, instead of having the typical headshot of a player, to integrate more action shots and motion shots, which are a lot more appealing to the design.”

Other services SMT provides to the US Open on behalf of USTA include stats entry on seven courts; serve-speed systems and content on seven courts; playback controls, including lap selector and data-point scrubbing; draw creation and ceremony; and match scheduling.