Joint effort of FSKC, the Kansas City Royals, the USO connects soldiers and their families

Every year, the Kansas City Royals celebrate Military Appreciation Night at a regular-season home game. Following the lead of Fox Sports Midwest in St. Louis, Fox Sports Kansas City (FSKC) in 2017 coordinated with the Royals organization to create its inaugural This One’s for You special, a telecast that connects soldiers with family members at the ballpark through on-air interviews. With the Chicago White Sox in town on the 17th anniversary of 9/11, Executive Producer Larry Mago headed to the Middle East with four special guests to bring this event to the troops.

“It’s not necessarily just about the service men and women but really about the entire family,” he notes. “They sacrifice parts of their lives and time being together to serve the country.”

Instead of developing an at-home production for this year’s edition, Mago and his team have gone abroad with four Royals greats: Hall of Famer George Brett, Bret Saberhagen, Reggie Sanders, and Mike Sweeney. After visiting four other locations, the legendary quartet will watch the game on the American Forces Network with the troops stationed at USO Camp Buehring in Kuwait. 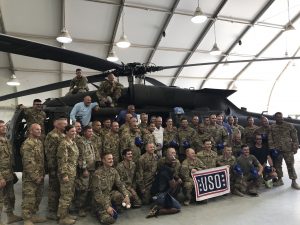 As for equipment, Mago decided to ship whatever they needed to the base beforehand to increase mobility and decrease congestion on the flight overseas.

“We’re shipping an ENG kit, a camera, associated camera equipment, wireless gear, and some interconnect transmission gear over there in advance so we will have the broadcast camera and its supporting gear already there,” he says. “We will carry a couple of small field cameras with us — DSLRs and things like that so that we can shoot some of the scenic video and be portable.”

To make this initiative successful and poignant, FSKC connected with a National Guard reserve unit currently on deployment in the Middle East. After a search for an adequate match, the Missouri National Guard 35th Combat Aviation Brigade (CAB), originally from Sedalia, MO, was selected: it’s stationed about an hour’s drive from Kauffman Stadium.

Among the Royals faithful, Mago coordinated with the USO in selecting the troops who would speak with their families in the stadium.

“The [National] Guard and all of the USO folks do a great job of working with the deployed units so that not only do their service members who are fans of the Royals know that this is happening but they also help coordinate some of the service people that are available to be on the air at that time,” he says. “We can connect the right families with the right people.”

On the live broadcast, the family-to-soldier interviews will be displayed in a standard two box with both parties or game action filling one box intermittently. To power the streamlined interview layout and capture the signal from the base, FSKC will rely on the main facilitator, the Defense Visual Information Distribution Service (or DVIDs) through the Department of Defense. This international satellite feed and the Fox Network Center in The Woodlands, TX, bridge the gap between the American Midwest and the Middle East on the other side of the world. 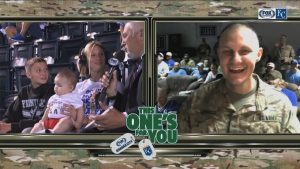 The two-box style used during the 2017 edition of This One’s for You will return on tonight’s telecast.

“We’ll feed on the base off DVIDs and downlink it in the States,” Mago says. “We’ll then ship it by fiber up to Kaufmann.”

According to Mago, the reverse feed will return in one of two ways: Skype out of the truck (similar to what was used last season) or Facetime directly to an iPad.

Although there have been possible technical challenges, the time difference between the ballgame in Kansas City and the military base created the biggest concern. “The biggest challenge is getting them to come when it’s the middle of the night,” says Mago. “The time difference of seven or eight hours means this game is going to be at 3:00 or 4:00 in the morning when we’re doing the viewing party.”

The Stateside Festivities
Back home in the States, the fun begins before first pitch at 7:15 p.m. CT. More than 100 families of the 35th CAB will be treated to a tailgate prior to entering the stadium. The pregame show will be extended to one hour to capture these families in their seats on CrownVision (the Royals’ in-venue scoreboard), provide live look-ins to the military base, and highlight notable ceremonies, such as the national anthem. Fox Sports Kansas City also packaged and supplied the Royals with prerecorded content to be shown between innings on CrownVision as well.

For Mago, the staff onsite in the Middle East, and those working at-home, the message is clear: this one’s for you. “The entire production ends up having the spirit of a volunteer effort,” he says. “It really is one of those times when everybody that works around our Royals broadcast wants to do extra.”