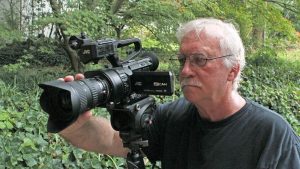 The quarterly series, which began airing in February, is focused on Alabama agriculture and how research from Auburn University’s College of Agriculture and School of Forestry and Wildlife Services is helping the industry. Eight hour-long episodes will be produced over two years for APT. The most recently episode, which focused on specialty crops, aired in August.

Brown, who purchased his GY-LS300 last fall, has edited the entire series and took over shooting duties with the second episode. Though it is downconverted to HD for broadcast, Spotlight on Agriculture is Brown’s first project to be shot in 4K. “I run a small company, so everything I buy has to be cost-effective,” he explains. “Technically, the JVC had to compare favorably with much more expensive cameras.”

So far, Brown has used the GY-LS300 to capture interview footage as well as B-roll of everything from crops to high-tech chicken coops to catfish harvesting. The GY-LS300’s smaller form factor made it possible for him to get shots while riding in a tractor and other challenging locations. “Because it’s so lightweight and handheld, you can get into small, tight places that you couldn’t access with a larger camera,” says Brown.

The GY-LS300 is Brown’s first JVC camera. He said a big selling point was the ability to use his existing Lumix lenses as well as other lenses with adapters. He has been very impressed with the camera’s Prime Zoom feature, which allowed him to zoom in and out without losing resolution or depth of field with his prime (fixed-focal) Tamron lenses. “There is an amazing amount of flexibility in how you record,” he adds, “and I’m shocked at how well it does in low light.”