Media-arts academy keeps up with advances in broadcast tech

The Conservatory of Recording Arts & Sciences (CRAS) has two campuses, in the Arizona cities of Tempe and Gilbert, but its reach as an educational institution in the broadcast sector far exceeds its physical footprint. It has built online training portals for Harman’s Studer brand of Vista audio consoles and Audiokinetic’s Wave Works Interactive Sound Engine (Wwise) audio-authoring tool for videogames, and, earlier this year, it launched an online portal on behalf of Dolby for its Atmos immersive format. That’s in addition to running an 11-month certification program in music production, broadcast sound, game audio, and live sound and audio for film and television.

Although most of its students come for music production, CRAS has put a sizable emphasis on and investment in broadcast audio. That is seen most clearly in the 42-ft. expando production unit bought in 2015 as a teaching lab for sports audio and often found sitting next to and connected with major networks’ own production units for MLB Arizona Diamondbacks games and NASCAR races at ISM Raceway. The school’s burgeoning business of building remote-training portals for audio-system developers, however, underscores how training on new platforms and products has taken on a new urgency as broadcast-audio technology moves quickly forward.

The Atmos training portal went live in April with two modules: a Core Concepts course provides a basic overview of the Dolby Atmos ecosystem, and an Atmos mixing tutorial examines the format’s concepts, equipment, and workflows. According to CRAS Director, Education, Robert Brock, the portal has been accessed by several hundred unique users worldwide in the past six months. 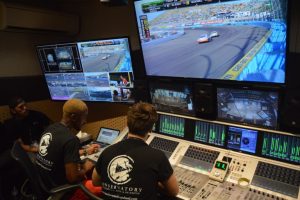 Students get hands-on training in broadcast audio-production in CRAS’s mobile unit, here at a NASCAR race.

“The goal,” he explains, “was to create a static resource to get users a baseline understanding of Atmos at a higher level and to introduce the concepts of mixing it and using the [Dolby] DP590 processor.”

The school plans to create a module on how to set up an Atmos control room, tackling such issues as monitor-speaker placement.

Another new emphasis in the school’s curriculum is on IP signal transport. The concept has actually been on the school’s agenda for over decade but as a