Behind the Mic provides a roundup of recent news regarding on-air talent, including new deals, departures, and assignments compiled from press releases and reports around the industry. In this week’s edition, DAZN signs notable on-air talents and legendary figures to their boxing broadcast team, Reggie Jackson joins Sirius XM with a new weekly show, and MSG Networks signed Erika Wachter for their New Jersey Devils coverage. 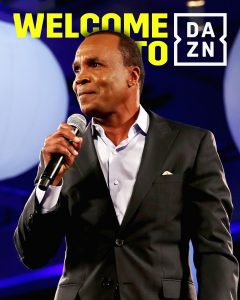 DAZN, the live and on-demand sports streaming platform, announced its boxing broadcast team. The legendary Sugar Ray Leonard and Brian Kenny will call the action, Kay Adams and Chris Mannix will host each fight night, and LZ Granderson will report from ringside.

They will work their inaugural event as a unit when world heavyweight champion Anthony Joshua defends his WBA, WBO and IBF belts against Alexander Povetkin on Sept. 22 from Wembley Stadium in the U.K. Beginning in October, the team will broadcast all Matchroom USA fights on DAZN including the previously announced Vargas vs. Dulorme on Oct. 6 and Saunders vs. Andrade on Oct. 20.

“What DAZN is doing is very exciting for both boxing and sports media,” says Leonard. “With all of the boxing dates DAZN already has on the calendar, they are going to have me quite busy — and that’s a great thing for fight fans because it means that good fighters are staying active and taking on meaningful challenges.”

Leonard will provide ringside analysis for the fights, drawing on his Hall-of-Fame career as a six-time world champion, Olympic gold medalist, and a legendary sports icon of the 20th century. As a fighter, Leonard’s skill and speed were matched only by his guts and heart. In a golden era of boxing, he took on — and prevailed against — many all-time greats. Out of the ring, Leonard has enjoyed a long broadcasting career working with ABC, NBC, Fox, ESPN, and HBO.

Kenny will serve as the blow-by-blow announcer. Winner of seven Sports Emmy Awards, he has spent more than three decades in boxing, covering the sport for ESPN, Showtime and Fox. Prior to his current anchor role with MLB Network, Kenny spent 14 years at ESPN, anchoring SportsCenter, Baseball Tonight and Friday Night Fights. On Friday Night Fights, he hosted the biggest names in boxing from Joe Frazier to Rubin “Hurricane” Carter to Floyd Mayweather. Kenny is a recipient of the BWAA Sam Taub Award for excellence in boxing broadcasting.

Leonard and Kenny last worked together in 2017 when they called the international broadcast of the Mayweather vs. McGregor super fight and have appeared together on screen across multiple networks over the past decade-plus.

Adams and Mannix will host each broadcast. Adams is best known for hosting Good Morning Football on NFL Network and DirecTV’s Fantasy Zone. Mannix is an award-winning boxing writer for Yahoo Sports and has worked as a ringside reporter for NBC, Showtime, and EPIX. He currently hosts the popular Yahoo Sports Boxing Podcast and has also covered the NBA for multiple outlets over the past 15 years.

Granderson will handle ringside reporting duties for DAZN. The award-winning journalist has covered everything from the NBA and tennis for ESPN to national politics for ABC. In addition to his work in television, Granderson can be heard each weekday on Mornings with Keyshawn, LZ, and Travis on ESPNLA 710, is a senior writer for The Undefeated, and writes for CNN. He also co-hosts livestream coverage of world premieres for Marvel Studios and was a co-host of the popular ESPN TV show SportsNation.

“We’re committed to bringing our subscribers not just top-notch boxing and MMA — but also top-notch production,” says Joseph Markowski, DAZN SVP, North America. “With this broadcast team, viewers will be in good hands and we look forward to introducing a series of innovations to our fight night experience in the coming months.”

Early action at each Matchroom USA fight night will be called by broadcast veteran Todd Grisham and former world champion Sergio Mora. Additionally, Akin “Ak” Reyes and Barak Bess, known for their boxing shows on Sirius XM Radio and ThisIs50.com, will interview some of the biggest names in the sport throughout fight week…

…Legendary Hall of Fame baseball player Reggie Jackson has joined SiriusXM to host a new live weekly all-sports talk show that will be heard by listeners nationwide. The opinionated slugger will host Swing Away with Reggie Jackson every Saturday (11:00 am – 12:00 pm ET/8:00 – 9:00 am PT) exclusively on SiriusXM’s Mad Dog Sports Radio (channel 82). The show began on September 15.

Fueled by his love of all sports, Jackson will cover a broad spectrum of sports topics on Swing Away, and he will be joined regularly by well-known athletes and celebrities on his program, where they will discuss the headline news in baseball, football, basketball, golf, and much more.

This is Jackson’s second time hosting a show on Mad Dog Sports Radio. In 2009, Reggie hosted October Nights, a six week series on the channel that focused on the MLB postseason…

…MSG Networks announced that Erika Wachter is joining the MSG Networks broadcast team this season as its new host for New Jersey Devils telecasts. A New Jersey native, Wachter comes to MSG Networks after working for the last two years as a sports reporter and host for Fox 5 New York.

Starting this season, Wachter will host all pregame, intermission, and postgame Devils coverage on MSG+. She will team up with former Devils captain and 14-year NHL veteran Bryce Salvador, who returns for his second season as studio analyst for the network. Devils great and three-time Stanley Cup Champion Ken Daneyko — “Mr. Devil” — returns for his fifth season as ingame analyst, alongside Emmy Award-winning play-by-play announcer Steve Cangialosi, who returns for his eighth season in the booth.

Wachter previously held on-air positions for various local stations, including NESN in Boston and CPTV in Connecticut. And from 2014-2015, she served as the sports reporter for the University of Connecticut, where she covered Huskies football, men’s hockey, and men/women’s basketball.