The more states legalize sports gambling, the better the odds that CBS Sports has a hit on its hands. Bleacher Report isn’t the only online publisher launching a show about sports gambling: CBS Sports HQ has created SportsLine Edge, which features insiders giving weekly picks to fantasy players and serious bettors.

Sports fans can find the show on CBS Sports HQ, the 24/7 live sports channel available for free (no pay-TV registration required) via the CBS Sports app on Roku, Amazon Fire, and Apple TV devices or browsing to cbssports.com. The show runs Monday through Thursday at 6–8 p.m. ET, Saturdays at 11 a.m.–noon and 2:30–3 p.m., and Sundays noon–1 p.m. and 3:30–4 p.m. That already full schedule will expand in the coming weeks. 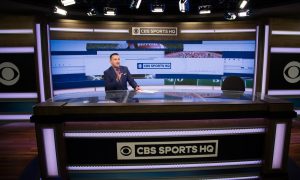 With the Supreme Court opening the door to legalized sports gambling for the states, now is the time for sports publishers to consider how to serve the gambling enthusiast. On Simms & Lefkoe: The Show, Bleacher Report is doing it with humor. CBS Sports is taking a different angle, focusing on expert picks.

The SportsLine brand, which launched three years ago, has always been about delivering picks chosen either by experts or by a proprietary algorithm. SportsLine Edge is an extension of that, and its goal isn’t just to tilt the odds in fans’ favor but to make viewers smarter about what to look for each week. The show will offer the computer algorithm’s take on the week’s games as well as that of experts and their methodologies. Discussions will cover trends, line movements, and other data points that viewers should consider. Although the approach is data-intensive and focused on viewer goals, information is bundled in an entertaining package.

SportsLine Edge is hosted by experienced CBS Sports HQ host Nick Kostos, who’s passionate about fantasy and gambling. He’s joined by odds maker Todd Fuhrman, legendary handicapper Hank Goldberg, and insiders such as Kenny White, Micah Roberts, and Kelly Stewart. Characters from the CBS Sports family, such as Jason La Canfora, will also make an appearance. The show includes interviews, but they’re usually with other CBS experts, not players. When it’s time to talk boxing, for example, the producers will tap Brian Campbell.

As for the studio, SportsLine Edge is shot in the main CBS Sports HQ facility in Fort Lauderdale, FL, but will include plenty of remotes with experts in Las Vegas.

Although the show streams live, viewers aren’t locked to the schedule. They can see any previously aired program on demand and even jump directly to the segment they want to watch. CBS’s approach: view it your way and get the information you need faster than you could from a linear broadcast show.

Now that SportsLine Edge has launched, Gerttula is analyzing viewing numbers, not game spreads, to ensure that his wager pays off. Although unique viewers is an important stat, even more important is the number of minutes they average and whether they come back. Driving ongoing engagement is a key goal. He wants to ensure that fans stay tuned in and come back for more.

Thanks to the show’s strong creative team, Gerttula is betting that SportsLine Edge is a hit. Don’t look for any Vegas bookmaker to take that action, though.

“This show is going to be a staple show for the new CBS Sports HQ network, it’s going to be a foundational show that’s core to what we do, and it’s going to become a core building block. That’s what I think,” Gerttula says. “I’m betting on it. It’s taken a lot of sweat and a lot of work to get it up. We obviously already put our skin in the game on this one.”