Ratings roundup is a rundown of rating news from the past week and is derived from press releases and reports around the industry. In this week’s edition, Tiger Woods wins the Tour Championship on Sunday afternoon, NFL Week 3 kicked off with the Cleveland Browns defeating the New York Jets on Thursday Night Football, the Pac-12 matchup between Stanford and Oregon closed out Week 4 of college football, Univision Deportes broadcasts Week 1 of the UEFA Champions League, and UniMás televised the most-watched Liga MX match of the season. 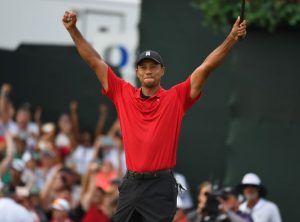 Coverage peaked from 5:45-6 p.m. ET with 10.84 million average viewers as Woods finished his TOUR Championship-winning round and Justin Rose sealed his season-long victory as the FedExCup champion. The peak viewership number trails only the Masters (16.84m) and PGA Championship (12.39m) in 2018. The extended coverage window (1:30-6:19 p.m. ET) drew 5.89 million average viewers and a 3.69 U.S. household rating to become the most-watched and highest-rated TOUR Championship telecast on record (1991-2018).

Sunday’s lead-in coverage on Golf Channel (11:54 a.m.-1:25 p.m. ET) also garnered a Total Audience Delivery of 829K average viewers and posted a .56 U.S. household rating, becoming the most-watched and highest rated lead-in telecast of the TOUR Championship ever (2007-2018). Golf Channel was the No. 2 Sports Network during this window and No. 7 out of all Nielsen-rated cable networks during that span.

…According to SportsMediaWatch, the singleheader on CBS earned a 7.0 rating and 11.9 million viewers. It was the lowest rated and least-watched Week 3 singleheader since 2004 (6.0, 10.3M). Also, this is the biggest drop in the first four weeks of the season with no other window dropping more than 19% in either the ratings or viewers category…

…The Monday Night Football telecast (8:15-11:45 p.m. ET) — a Pittsburgh Steelers’ 30-27 victory over the Tampa Bay Buccaneers — averaged 12.1 million viewers across ESPN, ESPN2, and ESPN Deportes, according to Nielsen, helping ESPN win the night among all networks, broadcast or cable, in households, viewers, and all key male and adult demos (18-34, 18-49, 25 54). Steelers-Buccaneers was also the highest-rated telecast of the night across all broadcast and cable networks among the same key male and adult demos.

Week 4 of College Football Capped Off by Stanford-Oregon Overtime Finish
The SEC on CBS matchup between Alabama and Texas A&M scored a 3.5 overnight rating, which is up 94% from last year (Alabama-Vanderbilt: 1.8), but down 5% from 2016 (Florida-Tennessee: 3.7). The 3.5 was the highest college football overnight of the weekend, marking the first time all season that CBS has topped the charts. (SMW)…

…A Texas shootout between the TCU Horned Frogs and the Texas Longhorns scored a 2.0 rating on Fox, down 17% from last year. As for the Wisconsin-Iowa nightcap, the game captured a 1.0 rating — down 17% from Notre Dame-Michigan State last year (2.4) (SMW)…

Univision Deportes delivered all 16 Group Stage matches on Tuesday and Wednesday, including 10 on its linear networks – Univision, UniMás, UDN, and Galavisión. The linear telecasts delivered 292 million minutes watched, making Univision Deportes’ coverage the most-watched opening week of the Champions League Group Stage on U.S. television, driven by both the delivery of more matches than ever before and strong viewership.

Airing in the 2:51 p.m. ET timeslot Tuesday on Univision and Univision Deportes Network (UDN), Liverpool’s thrilling 3-2 victory over Paris Saint-Germain became the most-viewed Group Stage telecast in Champions League history, averaging 672,000 Total Viewers 2+ and 338,000 Adults 18-49. Women accounted for 34% of the Adult 18-49 audience for the match, compared to an average of 25% for Spanish-language Champions League telecasts last season on ESPN Deportes.

Earlier on Tuesday, F.C. Barcelona’s 4-0 drubbing of PSV Eindhoven scored 618,000 Total Viewers 2+ and 315,000 Adults 18-49 in its 12:30 pm window on Univision and UDN. Trailing only the later Liverpool-PSG matchup, the Barcelona victory ranked as the second most-watched Group Stage telecast in Champions League history. This match also did particularly well with female viewers, who accounted for 36% of the Adult 18-49 audience.

UniMás out-delivered the CW network in primetime among Adults 18-34 (+20% adv.) this past week.