An ongoing test of 4K HDR video has been joined by its audio counterpart. This year, NBC Sports Group’s broadcasts of Notre Dame home games in the next-generation format, which have been taking place since the 2016 season, will for the first time also include audio in Dolby’s Atmos format as a single production truck outputting two formats instead of the customary side-by-side two-truck production. These broadcasts continue to be distributed exclusively by DirecTV.

“It makes total sense that, if you’re delivering the video in very high definition — in this case, 1080p HDR — it should be paired with next-generation audio,” observes Karl Malone, director, sound design, NBC Sports and NBC Olympics, who supervised NBC Sports’ deployment of Atmos for Olympics coverage at both the 2016 Rio Summer Games and the 2018 PyeongChang Winter Games. “I’m a great believer in tying [HD] formats together.” 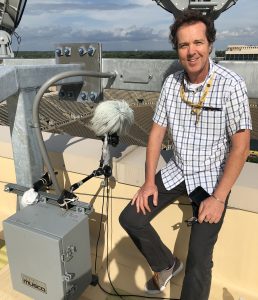 What set this event apart was that NBC Sports was able to deploy the entire sound-capture array itself. “At the Olympics,” Malone explains, “we don’t have complete control over where the microphones are placed; we’re essentially [taking] splits from the host broadcaster. The Notre Dame games are completely our own sound design and workflow.”

NEP’s ND6 mobile production unit, which has been used for the past two seasons of the Notre Dame 4K HDR broadcasts, was outfitted with four overhead speakers to accommodate the 5.1+4 Atmos mix, along with a Dolby DP570 processor to emulate 5.1 and stereo downmixes.

“We are testing Atmos upmixing also,” Malone adds. “We are upmixing our 5.1 edit content in the truck to 5.1.4 as well as commercials, so the experience is continually immersive.”

Noting that the NBC/DirecTV broadcast was the first live U.S.-based major sports event in Dolby Atmos, Dolby Senior Director, Pro Products and Solutions, Jean-Christophe Morizur, says, “Dolby Atmos enhances the viewing experience with powerful moving audio that flows above and around you. From the comfort of their home, Dolby Atmos will bring football fans closer to the action as if they are sitting in the stadium.”

Atmos in Action at Notre Dame

Pulling in audio sources from a pair of parabolic mics on the sidelines and from a mix on the SkyCam (college leagues do not allow players to be miked, which Malone laments as “the missing link”) and working at a Calrec Artemis console, A1 Doug Deems and his crew placed the close-in crowd in the 5.1 plane of the mix, with the front and back channels filled with near-crowd sounds of cheering and clapping effects; the ceiling speaker array was split between the Notre Dame side of the stands on the left and the visitor’s side on the right, picked up by pairs of Audio-Technica BP4029 stereo shotguns that provided a discrete height effect. Two pairs of omnidirectional “spot” microphones capture the home and visitor’s bands, letting both be heard in stereo on their respective sides of the height plane.

“You’re hearing the general near-crowd noise all around you, and the stadium-wide crowd ambience above you, which really opens that plane up nicely to the roof, in a dome above your head,” Malone says. “You’re getting the [military] flyovers really flying over you. We’re able to place things in positions we never could before. The listener is now really able to differentiate specific elements in the mix.” 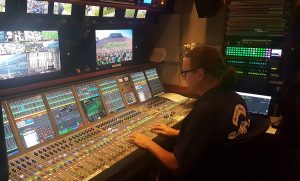 Doug Deems, NBC’s A1 on the Notre Dame 4K HDR/Atmos broadcasts, at the Calrec Artemis console aboard NEP’s ND6 unit in South Bend, IN

The audio is being sent as PCM audio to Englewood Cliffs, NJ, where it’s encoded into the Atmos format through a Dolby DP591 encoder, which can be monitored at the truck through a DP590 emulation processor.

Each week brings a few new tweaks to the mixing strategy. For instance, says Malone, during the second game, more band audio was added after touchdowns. “Then we hear the crowd reacting to both the touchdown and the band. It really puts you in there.”

He notes that Atmos is ready for prime time. “We don’t feel like we’re testing it anymore. Immersive audio won’t necessarily be right for every sport,” he adds, “but, for the ones that it is a good match for, like football, the impact will be incredible.”