Peacock is creating both HDR and SDR feeds via a single-stream, one-truck production model

Just two years after blazing the 4K-production trail with its Notre Dame football package, NBC Sports Group is at it again in South Bend, IN — this time with HDR. NBC is delivering every Fighting Irish home game this season in 4K HDR (games are produced in the truck in 1080p HD, then upconverted to 4K HDR for distribution exclusively to AT&T’s DirecTV subscribers), marking the first multigame football package to be produced in HDR and the most significant commitment to next-gen technology by any U.S. broadcaster to date. And NBC is even producing all games from Notre Dame Stadium in Dolby Atmos audio.

NBC’s primary goal in embarking on this HDR endeavor was to create a “single-stream” workflow using one truck for both the 1080p HDR and the 1080i SDR feeds, avoiding the need for costly side-by-side mobile units. 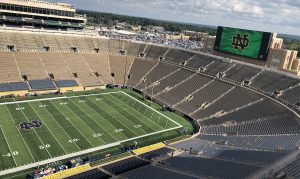 “We set out to try to figure out how we could do this as a single-stream production,” says Dave Mazza, SVP/CTO, NBC Sports Group and NBC Olympics. “A lot of [broadcasters], including us, have done side-by-sides of both 4K and recently 4K HDR, but that wasn’t our goal here. We felt, as an industry, that we all have to figure out how to [produce HDR and SDR] with a single-stream production, or it’s not going to be possible to maintain HDR as a long-term viable format. So that’s what we targeted. Our Sony friends having been telling us since the our Rio Olympics 4K HDR effort that it will work. We’ve done it three times now and feel we’re on the right path.”

Prior to Notre Dame’s primetime opener against Michigan on Sept. 1 (followed by Ball State and Vanderbilt the next two weeks and Stanford this Saturday), the NBC Sports engineering team headed to Chicago to test out its HDR workflows on two White Sox games at Guaranteed Rate Field and a Cubs game at Wrigley.

“We had no production people, just engineers and three cameras,” says Terry Adams, VP, NBC Olympics Engineering. “We were just making sure that the primary HDR workflows that we had put together worked before we went live.”

Adds Craig Bernstein, senior director, remote technical operations and engineering, NBC Sports, “One of the coolest aspects of this project was collaborating with all of our vendors throughout the entire process, some of them literally writing code up until the last minutes. What’s interesting is that, as an industry, hardly anyone is a true expert in this, so it was rewarding to solve the litany of challenges as a group, all learning together.”

Mantra Remains ‘Do No Harm to the SDR’

NEP’s ND6 mobile production unit — converted to HDR-capable in just 45 days prior to the primetime opener — is producing an HDR feed, which is downconverted to 1080i SDR for the main HD telecast. NBC opted to use HLG (hybrid log gamma) as its HDR format and is leveraging Sony’s HLG Live output mode to facilitate end-to-end HLG production.

“Our mantra was ‘do no harm to the SDR,’” says Mazza, “but I think all of us were pleasantly surprised with how good the HDR looked right away. A lot of work was done regarding how to convert from SDR to HDR and back so that [the content] could make the roundtrip and look the same when it got back to SDR. For example, it was very important that the graphics and the Notre Dame jerseys looked proper in HDR and also looked correct in SDR. A lot of energy went into making sure that roundtrip survived.”

NBC is deploying three Sony HDC-4300 cameras in native HDR mode and has installed 14 Sony HKCU-2040 4K/HDR processor boards into its existing Sony HDC-2500’s to allow them to output HDR. The Peacock has 26 cameras in total, including several POVs and ancillary cameras being upconverted to HDR. All camera monitoring/shading is done in SDR in the truck.

“We are shading solely in SDR,” says Adams. “The video guys have half a day to get this whole thing set up for each [game], so they just do their SDR show the way they always did. The HDR still looks striking, but they have to just do their same SDR show. I know there are some people who would say you have to shade in HDR, but, for a single-stream production, I don’t think it’s possible. When it comes to the extended range, you could make a stunning HDR picture that’s all white-clipped in SDR. You can’t do that; you kind of have to come at it the other way.”

In terms of contribution, two paths leave the truck: a 1080i SDR feed is sent to NBC’s 30 Rock playout facility in New York City for the network broadcast, and a 1080p HDR feed is sent to its Network Operations Center in Englewood Cliffs, NJ. At the NOC, the 1080P HDR feed is upconverted to 4K and encoded to Dolby Atmos; a dedicated 4K pod inserts commercials, which are upconverted to HDR. The 4K HDR program feed is then HEVC-mezzanine-encoded (via HEVC encoders provided by AT&T/DirecTV) and sent to DirecTV’s Los Angeles Broadcast Center (LABC) for distribution exclusively to DirecTV subscribers. The engineering team at the NOC did a great job of building and testing the new 4K HDR pod there, according to Mazza.

“We took a forward-looking view here because we’re trying to get ready to do this for the long term, not just a one-off,” he explains. “30 Rock was not ready to receive [an HDR feed], nor did we want them to have to. That’s why the regular signal leaves the truck and goes into 30 Rock just like normal, and we built a 4K pod for [commercial insertion]. We had a tremendous amount of help from our Advanced Technology Group led by Clarence Hau and our NBC 4K HDR evangelist Chris Seeger.

Replay and File-Based Workflows Still a Work in Progress
Although all three HDR productions have gone off without a hitch, NBC is still working to overcome some significant hurdles, especially in terms of file-based workflows.

“We have really only scratched the surface,” says Mazza. “We have the baseband side of the workflow running, and we have a relatively early version of the file side working. But the entire industry, including all the manufacturers, has a long way to go on the file[-based workflows]. At this point, there’s not really a way to electronically identify what signal is coming into your device. If the transcoding server doesn’t know what’s coming, it can’t transcode it properly.

“Right now,” he continues, “we’re solving that with different watch folders — you put the appropriate [file] in the appropriate watch folder — but there’s a lot of room for error with that. Everybody now needs to write to those flags so that the devices understand what is an HDR [HLG, sLog3, PQ, etc.] file and what is a BT.709 [HD SDR] file. We’ve got the crude version of it working, but we need the automatic version to come along now with the entire industry’s help.”

Adds Darryl Jefferson, VP, post and digital workflows, NBC, “The ITU and SMPTE flags are now defined for SDI, and the headers for files already exist. All vendors now need to work to both author those flags and recognize them.” 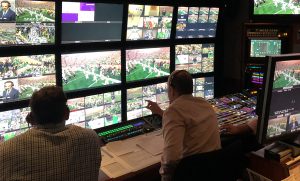 The workflow for the production team – led by producer Rob Hyland (left) and director Pierre Moossa – remains almost entirely unchanged despite the added layer of 4K HDR to the operation.

The replay workflow has been a particular challenge because of the sheer size of the 1080p HDR files, which can slow down the EVS servers. In addition, to produce a quality picture, NBC is recording at four times the data rate necessary for 1080i; recording a 6X-slo-mo camera feed would require a whopping 24X the bandwidth. Native 4K would be four times all these numbers. As a result, Mazza explains, NBC isn’t recording high-speed HDR content in 6X but rather in 3X and 4X for the time being. The manufacturers are working on a better codec for 10-bit HDR with a lighter footprint.

“Truthfully,” says Adams, “[the high-speed–replay operation] is probably the only thing that the production team has noticed, and they have been very patient with us. Everything is monitored in SDR, so nothing looks any different than it has in the past. Other than that, they just do their show the same way they always have. Our main goal obviously was to avoid any changes to the network show. If any accommodations [were] necessary, they would have to be made in favor of the SDR picture. And that’s the point where we are now: we’ve got that done and can focus on making the HDR better without impacting the main show.”

Faces, Helmets, Sky Stand Out in HDR
After three games, the NBC Sports engineering team is pleased by the HDR results thus far. Mazza points out that, with HDR, viewers can see the faces of the players in their helmets easier and the gold shine of the Fighting Irish helmets (which, legend has it, are painted with actual gold flakes collected when the Golden Dome on campus was built) are particularly vibrant. For Adams, the highlight has been the “fabulous yet subtle color and luminance of the sky, especially around magic hour.”

Says Bernstein, “There’s something cinematic about it when you watch it. It’s got that range of highs and lows that’s compelling to a viewer. Anybody who looks at the HDR image can say there’s something about it that looks different. [Distinguishing it from] a straight 4K image is a little more difficult. It’s amazing how fast your baseline shifts: after you watch [HDR] for 10 minutes, it’s hard to go back [to SDR].”

Vendors, Broadcasters Must Unite for HDR To Flourish
Although NBC’s HDR operation is up and running in South Bend, the NBC team continues to evolve the workflow each week. Mazza notes that Sony and NEP are playing an “instrumental” role in both the launch and continued cultivation of NBC’s HDR-production ecosystem (along with Cobalt, which handles frame sync and up/downconversion needs).

“I don’t want to claim victory yet,” says Mazza. “It was not simple, and it was not trivial: almost everything under the hood had to change to make it work. We have done only three games, and it’s still taking a lot of care and feeding to just get it to work.

“It’s not quite ready for mass adoption ,” he continues, “but I think we have shown that it is possible. Some key things have to happen — reading and reacting to the HDR flags automatically, the [replay-]server [manufacturers] have to get a smaller codec – and to make this whole process more automatic, but we are certainly on our way.”