The ‘content factory’ continues to expand in Lower Manhattan

When ESPN decided to expand its reach to New York City’s South Street Seaport district and opened a facility there in April, VP, Remote Operations, Chris Calcinari christened the location as “a content factory” for the network. As First Take reaches the one-month mark in its new digs, the project is exceeding company expectations, relying on an at-home, or REMI, production workflow tied to its Bristol, CT, headquarters. 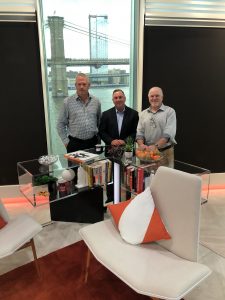 “We’ve found out that the Seaport is the place to be,” says Mike Foss, supervising director, ESPN External Studio Group. “We’re getting a tremendous amount of content initiatives coming here looking for availability.”

The Empire State of Mind

With native New Yorkers Stephen A. Smith and Max Kellerman on-air and a vantage point in Lower Manhattan, Creative Directors Dan Cunningham and Noubar Stone worked closely with Clickspring Design and show director Kurt Ackermann to capture the surrounding area, including iconic New York City landmarks, such as the Brooklyn Bridge, FDR Drive, and the East River. “In one wide expansive view, it tells a story of why we’re here,” says Foss. “While the discussion and the editorial side is always what we’re bringing front and center, it’s the subtleties [that are key].”

To capitalize on the mystique of the city skyline, eight 5- x 8-ft. LED displays create a curtain effect along the backdrop’s interior. As for lighting, the window panels are controlled by a special ND filter that can be adjusted to the sun’s position. During the 10 a.m.-noon timeslot, Director, Studio and Remote Lighting, Chris Watson has the additional help of natural light along with interior lighting from Ferri Lighting Design.

Despite the edgy and sleekness of the upgraded look, ESPN wanted to incorporate some of the show’s elements from its former studio. “Some of the things that migrated from the last version of the show was the intimacy of how close they’re located and that integration of that fourth position,” says Foss. “It’s like they’re in your living room.”

ESPN is embracing the REMI model with all control rooms and the majority of technical operations anchored in Bristol. With the help of a centralized and permanent spot, the at-home productions are running seamlessly and save valuable space at the South Street Seaport studio. “It’s actually easier to do it in a fixed facility than it is to do it on a remote because we’re constantly going from venue to venue or using uplinks.” Calcinari explains. “There’s a variety of resources that are in the middle of that REMI workflow on the road. This is always here.” 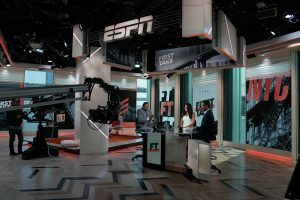 The First Take studio features five Sony HDC-2500 cameras and a background with breathtaking views of the Brooklyn Bridge.

Similar to the at-home strategy from an operations perspective, the idea of expanding the brand to New York City with the new facility kept the headquarters at the forefront. “It’s really a hub-and-spoke type of thing,” he adds. “You land everything in Bristol, and then you can go anywhere.”

Synergy and ‘a Clubhouse Feel’
ESPN wanted to create a high-energy and engaged environment outside of the set to encourage constant collaboration. “It is such a clubhouse feel,” Foss says. “Folks talking, interacting, suggesting, and appearing on others’ shows.”

The synergy within the building is evident in regards to programming: the schedule on some days can serve as many as 18 programs — including Get Up!, High Noon, and Always Late With Katie Nolan — and a multitude of podcasts. The man in charge of handling the daily scheduling and workflow, Director of Remote Operations Terry Brady, sees the crowded calendar as an opportunity.

“We have a big schedule, but it’s a lot of fun because it’s new every day,” he says. “Sometimes, in a studio environment, you get stagnant because you’re doing the same shows over and over. That’s not the case here. We just adapt as they come along.”

Although the interaction between operations, production, and on-air teams benefits from an all-hands-on-deck mindset, the team effort flows over to the sharing of equipment between the two main studios. “There are five [Sony HDC-2500] cameras in both studios,” Foss says, “but the design allows the flexibility to bring a camera over to Studio 1 if we want to go to six, seven, or eight cameras.”

With the help of the network’s Crash Carts, productions aren’t restricted to the confines of the studio. The custom-designed carts are motorized and can support audio, video, communications, and internet at outdoor locations around the Seaport. BSI Blue Steel wireless microphones operating in the 1,435-1,525 MHz spectrum are used to avoid any issues with RF reception in the congested RF environment of Lower Manhattan.

“Not only can we move all of this equipment from the studios, we can also bring this stuff outside or on the roof,” Calcinari says. “There’s a lot of flexibility and utilization of the equipment in every space that we have.” 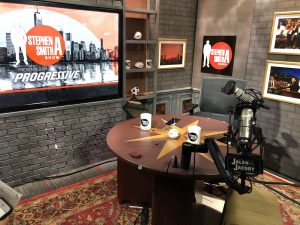 Multiple shows, the Stephen A. Smith Show among them, are produced at the South Street Seaport facility.

In addition to the river deck at the base of the building, ESPN uses all available onsite areas to churn out different forms of content. “We shot the closing segment for our 9/11 special on the roof. We did the premiere of Basketball: A Love Story from the roof with an audience up there,” he points out. “There’s a lot of really interesting things happening because of our relationship with the building that has gone a long way in terms of the benefit of ESPN.”

As for presenting fresh faces and personalities on the airwaves, the Seaport district’s Big Apple location allows high-profile guests to visit. “It’s great for us,” Foss says. “It’s a simple hop down here from any place in Manhattan.”

Radio, Podcasts Join the At-Home Production Fun
To carry on the theme of multiplatform content, a wide variety of podcasts also are generated from the Seaport: The Stephen A. Smith Show (with simulcasts on ESPNews), Jalen & Jacoby, The Paul Finebaum Show, and various other ESPN shows.

The REMI model is being used for all podcasts produced at the facility, with at-home productions coming from Los Angeles (for Jalen & Jacoby), Charlotte (for The Paul Finebaum Show), and Bristol. The studio leverages both the Simplylive ViBox automated production system and the Wheatstone WheatNet IP network (connecting Seaport Blades with Bristol Blades, so that all sources and destinations are available in both locations) to ensure the production is as efficient as possible.

Expanding With the Seaport
The seeds sown earlier in the year are bearing fruit near the waters of New York City. In its infant stages, the workspace is already hosting marquee programs.

“I think there’s no better vote of confidence than the fact that we’re hosting [special editions of] SportsCenter from here,” says Calcinari. “The fact that we’re actually able to [produce our flagship show] from here says it all.”

The future of ESPN in Lower Manhattan will continue to grow alongside the increased commercialization of the South Street Seaport District. With an already stacked lineup of shows produced there, the network has a few tricks up its sleeve moving forward.

Says Calcinari, “We have another show that’s going to launch from here that is going to be announced shortly.”