Mike Wells, one of the most decorated and respected directors in NASCAR television history, will direct his final NASCAR race this weekend during NBC Sports Group’s Monster Energy Cup Series coverage at Talladega Superspeedway. In nearly four decades at the front bench on NASCAR productions, the 21-time Emmy winner has directed more than 1,000 races for network television.

“I feel really lucky in my career,” says Wells. “I’m going to cover [this weekend’s] race the way I always cover it because it’s always worked for me throughout the years. It’s going be bittersweet. It’s my last NASCAR race, so it’s going to be very emotional — that’s for sure. But, at the same time, I’m sure there are going to be some very memorable moments in that race as well.”

After earning his chops in the truck directing sprint and midget-car races, Wells directed his first NASCAR race in 1981 in Rockingham, NC. He went on to direct some of the most memorable and historic telecasts in NASCAR history for NBC, ESPN, Turner Sports, and others – including almost every major race on NBC — over 37 seasons.

“Mike’s contributions to NBC Sports and NASCAR have been immeasurable,” says Sam Flood, executive producer/president, NBC Sports Group. “His legacy as an Emmy Award-winning director and innovator in the sport is second only to his reputation as a tremendous teammate, leader, and mentor to so many who have had the privilege of working with him. While it’s bittersweet for this to be Mike’s final NASCAR race for us, we can’t think of a better person to direct NBC’s inaugural Indy 500 in 2019.” 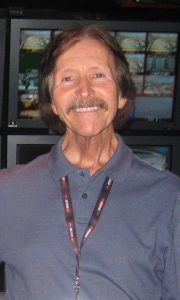 Mike Wells has directed more than 1,000 races for network television.

Some notable highlights include Jimmie Johnson’s record-tying seventh NASCAR Cup Series Championship and all four of Jeff Gordon’s titles. He also directed one of the most iconic passing-of-the-torch moments in NASCAR lore: Richard Petty’s final race, which was also Gordon’s first race. Check out The SVG Podcast to hear Wells recount more of his favorite moments.

In addition, he has had the opportunity to work with many of the most-popular driver/analysts in the history of the sport, including Jeff Burton, Dale Earnhardt Jr., Dale Jarrett, and Kyle Petty.

Although this weekend’s race at Talladega marks the end of Wells’s storied NASCAR career, he’s far from finished. Thanks to NBC’s recent rights deal with IndyCar, he will slide into the director’s chair for the Peacock’s coverage of the Indianapolis 500 next summer, as well as a number of IndyCar Series races.