Inertia Films founder Troy Thomas has been using Cartoni tripods for 25 years. In fact, he has been using the same Cartoni Delta tripod since 1994. That tripod, along with newer Cartoni models, will support Inertia Films as it covers Super Bowl LIII in Atlanta. This will be Atlanta’s third time hosting the Super Bowl but the first to be played at Mercedes-Benz Stadium, home of the Atlanta Falcons. 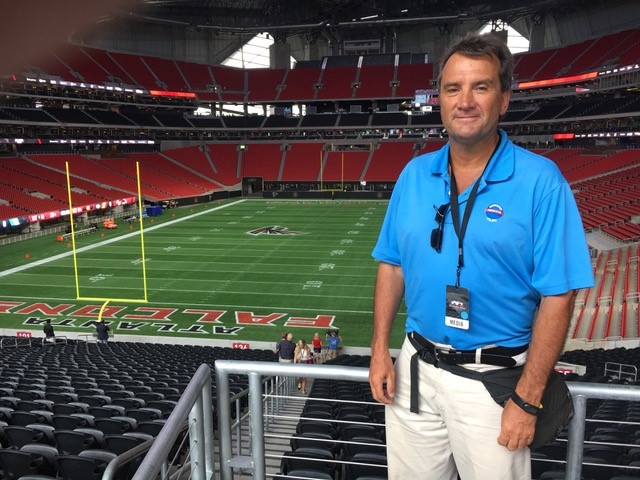 Inertia Films founder Troy Thomas will once again rely on Cartoni tripods for the Super Bowl.

Founded in 1993, Inertia Films is an Atlanta-based video-production company. What started out as a single camera operator has grown steadily to provide services that include field and studio production, postproduction, live-shot capabilities, and equipment rentals.

“We do a little bit of everything, including work for NFL Network, MLB Network, and Fox Sports,” says Thomas. “But we also cover behind-the-scenes work for network television shows and feature films shooting in Georgia. Atlanta is a real boomtown right now, and there’s a lot of work, including documentaries, corporate gigs, and satellite media tours. But, if I’m honest, covering the Falcons for the NFL the last 15 years has been one of my all-time favorite assignments.”

The state of Georgia has seen a record number of productions because of tax-incentive legislation. According to the Atlanta Journal-Constitution, Georgia had 455 qualified TV and film productions in fiscal year 2018, by far the most since the tax credits were passed in 2008. Inertia Films has managed to carve out work on these productions in large part because of its in-house experience and hustle.

Along the way, Inertia Films has made a name in the Atlanta production business with its versatility, working for corporate clients, cable news networks, and broadcast programs like American Idol, NFL Total Access, Auction Kings, Gangland, House Hunters, PBS NewsHour, and Inside the PGA TOUR, to name a few. Being diversified also means being able to shoot for newsmagazine shows on cameras like the Sony FS7 or Canon C300 or to switch to a more cinematic style with its Arri Amira camera package.

“We have to adapt and diversify to stay ahead of our competition. Having a live-shot studio in our facility is a huge advantage to offer our clients,” Thomas explains. “But, many times, we also shoot live shots on location, whether that’s at, say, the Falcons’ practice facility, Mercedes-Benz Stadium, or SunTrust Park. In 26 years, whether it’s ENG, EFP, BTS, or live-shot work, I’ve learned the real value of customer service.”

What began on a dining-room table in Cincinnati in 1993 now has credits in 38 states, 13 countries, and four continents with more than 150 awards, including four regional Emmy Awards. Inertia Films’ latest Emmy was for PBS documentary Liberty & Slavery: The Paradox of America’s Founding Fathers.

Late this month, Inertia Films will prepare for its latest production challenge: Super Bowl LIII in Atlanta. The NFL Championship provides more than two weeks of work with more than 40 camera crews booked just to cover Super Bowl Week. Additional crews will be needed for entertainment magazine shows, live shots, and various corporate clients that will descend on Atlanta. Thomas worked at previous Super Bowls in Tampa, New Orleans, and Atlanta, but he says this year’s game is by far the biggest sports challenge his crews have faced so far.

Over the past quarter century, Inertia Films has trusted Cartoni tripods to get the job done right, and Super Bowl LIII will be no exception. “The first tripod that I ever bought was the Cartoni Delta,” Thomas says. “I remember meeting Steve Manios from Manios Digital [the U.S. distributor of Cartoni] and seeing the Delta in the old Atlanta Stageworks. I’ve always found it to be a really great tripod, and, once I like a piece of equipment, I tend to be pretty loyal.”

He notes that the Cartoni Delta is lightweight but heavy enough to support the various cameras he has deployed over the years.

“We originally needed a tripod that could handle those heavy Betacam cameras, when those were around,” he explains. “When I was starting out, cost was a serious consideration. Fortunately, Cartoni tripods are more affordably priced than Sachtler and yet provide the same quality. Plus, I always appreciated the innovation and genius of [founder] Guido Cartoni.”

The Cartoni Delta tripod system was originally manufactured in the early ’90s to support EFP camcorders equipped with large lenses or to be deployed with EFP cameras. Cartoni replaced the Delta with the current Focus 22 system used by many production companies because of its versatility.