NFL Pro Bowl: ESPN Goes Back to the Lab

New technologies will be trialed at the exhibition game

Before the New England Patriots square off against the Los Angeles Rams under the bright lights of Atlanta’s Mercedes-Benz Stadium in Super Bowl LIII, the 2019 Pro Bowl will host the league’s brightest stars from the AFC and NFC conferences at Camping World Stadium in Orlando at 3 p.m. ET on Sunday. Staying true to the tradition of years past, ESPN will once again use this ballgame as a production playground in its 15th year hosting.

“We want to come away with some options and ideas,” says Steve Carter, senior operations manager, ESPN. “The league also gets to see [the technology] and sees that there is validity to it.”

The Testing of the Tech

During the Monday Night Football regular-season schedule, the network has very little leeway for experimenting. With the exhibition game in the Sunshine State, however, ESPN has the liberty and free rein to push the tech envelope.

Last year’s edition saw advances in camera implementation, including four Sony HDC-4300’s and an aerial view from atop the Drone Drop challenge, and this year’s edition will get its own bag of tricks. The four 4300’s will return, but notable additions to the 30+-camera fleet will be deployed.

The broadcast will have the flavor of the College Football Playoff National Championship, with both line-to-gain and an ActionStreamer RefCam. Unlike in the Clemson-Alabama matchup, the RefCam will be frequently passed among the field officials to provide different angles and perspectives. C360 cams will be placed on the goal posts for a 180-degree view of action in the back of each end zone.

As for audio, all quarterbacks, team captains, and coaches will be miked for in-game sound. Other players will be miked as well for the NFL’s social-media channels: the New York Jets’ Jamal Adams, the Los Angeles Chargers’ Melvin Gordon, the Philadelphia Eagles’ Malcolm Jenkins, the New Orleans Saints’ Cam Jordan, and the Cleveland Browns’ Jarvis Landry.

“During the preseason and Pro Bowl, the NFL does give us an opportunity to test out these technologies,” Carter explains. “We wanted to take a look at some of these technologies [that were used in the National Championship game] ourselves.”

The Pro Bowl Skills Showdown pitted the NFC vs. AFC in games that tested agility, creativity, and teamwork.

Although a bunch of new equipment will be used during the annual all-star showcase, ESPN is trying to develop and expand on another ActionStreamer creation. The HelmetCam was used during the 2018 Arena Football League playoffs on a quarterback and a linebacker, but ESPN could potentially use this quarterback POV in the future.

NEP’s EN-1 mobile unit will handle Sunday’s game, but Thursday night’s Skills Showdown was produced both by staffers onsite and remotely from headquarters. The tape-delayed competition was produced out of the Wide World of Sports Production Center with editing done in Bristol, CT.

Four Networks, Four Languages, Global Distribution
All Pro Bowl festivities will be broadcast on four networks: ESPN, ESPN Deportes, ABC, and Disney XD. On a global scale, ESPN International and its affiliated networks will distribute the production live to more than 47 million households in 34 countries and territories, including Brazil, Australia, New Zealand, the Pacific Islands, Canada, the Philippines, and sub-Saharan Africa. Besides English and Spanish, commentary and analysis will be available in French and Portuguese. The game will be available digitally via the ESPN app. 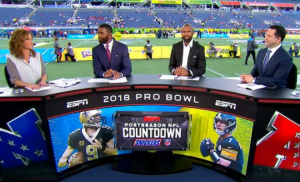 NFL Countdown will be onsite at Camping World Stadium before kickoff.

Before kickoff, a special Pro Bowl edition of Postseason NFL Countdown will broadcast from the field with host Suzy Kolber and analysts Matt Hasselbeck, Randy Moss, Charles Woodson, and Louis Riddick. NFL Insider Adam Schefter will join the show as the crew highlights a Pro Bowl version of the “You Got Mossed!” segment and the 13-/14-year-old boys’ NFL FLAG National Championship.

On ESPN Deportes, SportsCenter and NFL Esta Noche will lead in to the game, which will be called by Eduardo Varela, analyst Pablo Viruega, and reporter John Sutcliffe.

Ending the Year With Some Fun
ESPN’s final regular-season game occurred at the AFC Wildcard game between the Houston Texans and the Indianapolis Colts. With additional beauty, slash, and MōVI RF cams, the team captured the atmosphere of the postseason. Now that the “games that count” are in the rearview mirror, Carter plans to have a little fun working his 12th Pro Bowl for the network.

“We have a great crew and a great production-management team with Chip [Dean, coordinating director, Monday Night Football] and Jay [Rothman, VP, production, and Monday Night Football producer],” he explains. “We know we have a job to do, but we try to make it fun all of the time. We’re a family, so you try to enjoy it.”