The inaugural season of Alliance of American Football (AAF) kicks off this weekend, and all four game productions are expected to feature next-gen production tools aimed at delivering a football-viewing experience unlike anything viewers have seen before. Highlighting the tech expected to be deployed this season are dual Skycam systems on every game, a state-of-the-art virtual studio for pre/postgame and halftime shows, an RFID-chip–based player-tracking system, and live mics on coaches and quarterbacks. 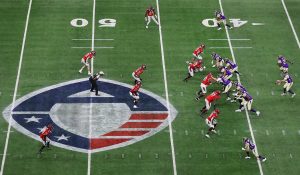 The inaugural AAF season kicks off on Saturday night in primetime on CBS.

“There are a number of technological advances that we’re going to have,” said Alliance of American Football Co-Head of Production Mark Teitelman during an SVG event at Sneaky Big Studios last month. “Being able to build something from the ground up is something we’re all proud of. I think the quality of football is going to be really, really strong; we certainly have a lot of impressive NFL people working on it. So I feel good about what we’re going to put on TV. And it’s our job as storytellers, as producers and directors to make it look as good as possible.”

The upstart league is attempting to balance high-end production elements with cost-efficient workflows. During the season, two of each weekend’s four games will be produced remotely from a control room at Sneaky Big in Scottsdale, AZ (where the virtual studio also is located).

The league has inked deals with CBS Sports, NFL Network, and Turner Sports. The action kicks off tomorrow with a pair of primetime games on CBS, which will also carry the Championship Game in April. On Sunday, CBS Sports Network kicks off its 11-week AAF Game of the Week at 4 p.m. ET, and NFL Network’s 19-game AAF slate at 8 p.m. (the network will carry two primetime games per week for the remainder of the regular season). 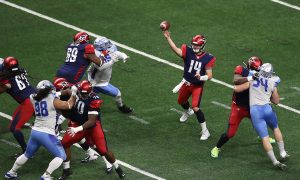 The AAF production team will have more freedom to deploy Skycam in a variety of locations compared with NFL coverage.

TNT will televise one AAF regular-season game (Feb. 16 leading into NBA All-Star Saturday Night) and one playoff game. Additional regular-season games will be available weekly via B/R Live. Fans will be able to stream AAF games for free through the league’s app, which also features a predictive game for fans.

In addition to the technology, viewers can expect a more streamlined football-viewing experience. According to Teitelman, AAF games will have no TV timeouts and less than half the commercials of an NFL game, as well as no kickoffs and extra points. With a simplified structure and the league’s full ownership of all eight teams, Teitelman believes, production teams will have an unparalleled level of freedom for storytelling.

“When Charlie [Ebersol, AAF co-founder/CEO] pitched me to come on board, he basically said, You have a blank slate,” says Teitelman, a veteran NFL Network/Fox Sports NFL-game producer. “We own the league, and we own the teams, so we don’t have to go get 32 owners’ permission or go through a competition committee to [deploy new production elements]. We’re certainly not a gimmick league, though; it’s real football. But there are certainly some freedoms that we have that the NFL doesn’t [provide]. That opens up a few more channels for us and gives us a chance to paint with a little wider brush.”

Game Coverage: Coverage Will Be Based on Skycams
According to Teitelman, each game production will feature six or seven cameras — whether onsite or at-home production — including two Skycam systems. For the two at-home productions each week, the Skycam pilots will be onsite, but the operators will be located at Sneaky Big. This week, A game will operate out of NEP’s Iridium and Zinc trucks and the B game will utilize F&F Productions’ GTX-14 mobile unit. 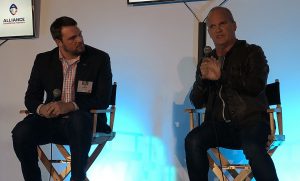 Although most football productions deploy three up-high cameras to cover the field, AAF games will typically have one. However, Teitelman says, production teams will compensate with a more liberal use of the two Skycam systems at their disposal.

Rather than simply locating the Skycam behind the offense or above the line of scrimmage, the production team will have the freedom to maneuver the systems almost anywhere on the field. Viewers can expect to see Skycam views never seen in NFL action, including from the defense perspective and off-axis sideline angles. In the red zone, the Skycam will often be located along the sideline, operating like a traditional camera cart but with the capability of flying down the sideline or toward the action.

“Our goal is to figure out if there’s a way we can show [the game] differently from what everybody else has been [showing it],” says Teitelman. “We’d like to see the Skycams on the sideline in a very intimate play-by-play [integration]. It’s very complicated, and we have to play with it and really work at it. But there are a lot of things those cameras can do that producers have been a little reluctant to get super adventurous with.”

On the audio side, head coaches and quarterbacks will be miked (including play-calling comms) when available. And, with more freedom to deploy live mics on the field, the production team will look to capture more NFL Films-style inside-the-game audio.

“One thing that has always bothered me is, we do an NFL game on Sunday and, that Tuesday, you see the NFL Films version on Inside the NFL. And it’s a totally different game because you hear everybody talking; you see what they’re saying. I would love to be able to give viewers that experience. I want to push the envelope a little bit and try to give people something that they don’t see when they watch football today.”

The AAF also worked closely with the CBS Sports creative team and Undefined Creative to develop a uniform graphics package and overall look that will be featured across all AAF live telecasts and streams. SMT is supplying Alliance broadcasters with traditional graphics such as the score bug, along with its virtual 1st & Ten line platform, and its QB Stats prompter.

At-Home Production: More Than Just Cost-Savings
Each Saturday and Sunday will feature two AAF games — one produced out of a truck, the other produced “at-home” out of Sneaky Big. For the at-home games, a Skycam operator will be located in Scottsdale, where all SMT graphics will be inserted and announcers will call the game. The AAF and Sneaky Big also worked with Brainstorm to create a brand-new virtual studio for pregame, halftime and postgame shows. 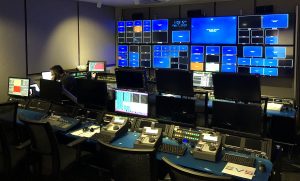 Two AAF games per week will be produced out of a control room at Sneaky Big in Scottsdale, AZ.

“Yes, it would be easier for all of us to roll four trucks every week,” Teitelman acknowledges. “It’s obviously more expensive, but, to quote Donald Rumsfeld, there aren’t as many ‘known unknowns.’ But there are a number of economic reasons why being [at Sneaky Big] makes more sense. It’s not just about money, though: there are some significant advantages [in not] sending trucks everywhere.”

Besides eliminating the costs of mobile-production facilities and crew travel, the at-home model allows the league to meet its goal of two Skycams on every game and also makes it easier to attract top-flight on-air talent, who won’t have to travel to a different city each week.

“We’re going to have two Skycams at all our games, and we probably couldn’t have done that if we didn’t have an at home production solution,” Teitelman says. “We were also able to get a talent like [former Cincinnati Bengals coach] Marvin Lewis to be a big part of the AAF. He lives in Scottsdale, so it was incredibly attractive to him to be able to just drive over for a game on Saturday and Sunday, be a part of it, and go home every night. And we’re going to be lucky to have a guy like that.”

CLICK HERE for more on Skycam’s role in AAF productions.

Camera/equipment levels for the at-home productions will be roughly similar to those produced from onsite mobile units, Teitelman says, adding that he thinks “the two shows will look very, very similar.”

To make announcers more comfortable calling the game off-tube in a studio, they will be provided a feed of the all-22 camera angle and other feeds to make it feel more like they are at the stadium.

All About the App: Companion Experience To Emphasize Wagering
The AAF is about much more than just the linear-TV/streaming experience, however. The league’s mobile app is leverages a player-tracking system to provide predictive gaming experience that allows fans to guess upcoming playcalls based on real-time data and odds. 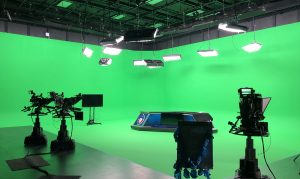 AAF’s pregame, halftime, and postgame shows will use a virtual studio at Sneaky Big in Scottsdale, AZ.

“I think the app and the game will have a very good intersection and will feel collaborative. That’s our goal,” says Teitelman. “I don’t know if we’ll be that right away on day one, but we certainly want people to interact with the app when they’re watching the game more than what people do now.”

After the U.S. Supreme Court opened the door for states to legalize sports betting last May, the AAF inked a deal with MGM Resorts to serve as official sports-betting sponsor and betting-technology provider in September. Though the initial version of the app solely features the predictive play calling game , Ebersol has said he expects wagering to play a major role in the league’s overall strategy to engage fans.

“There’s a gaming aspect to it — like Clash of the Clans,” he says. “You want people to form alliances and play the game while you’re watching the game. The app and the data guys led by Eric Schwarz have got some great ideas.

“We have chips in all the players,” he continues, “and we’re able to track where they are. So, instead of a very rudimentary version of a gamecast, it’s going to be a significant step forward in terms of the data points and telemetry.”

An Evolving Product: Improvement Throughout the Season
Teitelman emphasizes that AAF productions will evolve significantly during the inaugural season. In terms of goals, he is focused on “an evolution of data” and “an evolution of how we cover play by play.” 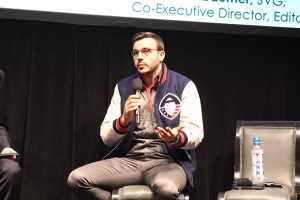 Charlie Ebersol, Alliance of American Football, Co-Founder and CEO, served as the Conversation

“We’re going to crawl before we walk before we run, for sure,” he says. “Hopefully, by the middle of the season, we’re going to be able to push the envelope to do the kind of things that you haven’t seen on a live broadcast before.

“I know spring football leagues have come and gone in the past; we all know that,” he continues. “This one is not an NFL competitor, though; it’s complementary. I think we have as good a chance as any to have some legs, and that’s why I got involved. On Feb. 9, I hope it will be a great night of football, and I hope people think ‘I’d like to spend some time with this league.’ Then I’ll be happy.”

NOTE: This story was updated after it was originally published following the official launch of the AAF appl