Fox Sports’ annual pilgrimage to Daytona, FL, this month has once again provided an invaluable petri dish for testing next-gen production technologies. Through its Fox Sports Lab initiative, the Fox Sports team is utilizing its two weeks onsite for Daytona Speedweeks and the epic Daytona 500 finale on Sunday as a test bed for leading-edge cameras, virtual graphics, and other technology to be used throughout the NASCAR season as well as on other Fox Sports live broadcasts. 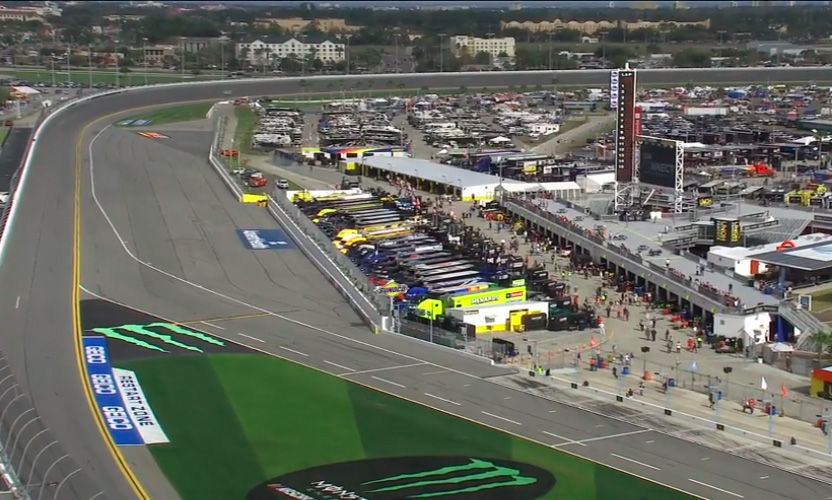 Fox Sports enters its 19th season of NASCAR coverage with live Daytona Speedweeks coverage leading into the Daytona 500 on Sunday.

Among the tech toys on hand are a Mega Trax high-speed Rail Cam, an untethered Helivideo drone, a Visor Cam, a Redrock Micro Digiboom body jib, an enhanced-data-analytics touchscreen and graphical re-creations of the race powered by SMT track data, and tight integration with Fox’s new state-of-the-art virtual studio in Charlotte, NC.

“What is great about Daytona is, we get so many hours of programming over two weeks, which gives us a whole lot of time with state-of-the-art equipment to [perform] tests and research — not only for motorsports but for [all our sports properties],” says Mike Davies, SVP, technical and field operations, Fox Sports. “This is a great opportunity for our amazing team to start looking at brand-new things or refine things that we’ve already been working on. Besides the fact that this is one of our biggest shows of the year and a fantastic event, there are a lot of opportunities to get these tools out there to test for R&D.”

Fox Sports has worked with Mega Trax to construct about 850 ft. of custom monorail track coming out of Turn 2 on the backstretch. 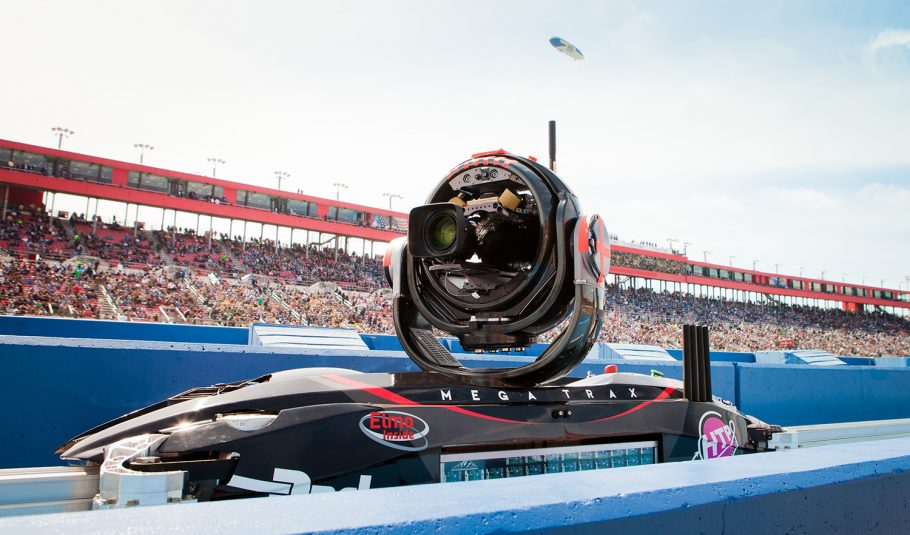 Mega Trax Rail Cam travels along 850 ft. of track along the backstretch.

With nearly silent operation, the Rail Cam (featuring a 250mm lens) can accelerate from 0 mph to 60 mph in 2.8 seconds, topping out at speeds in excess of 90 mph. The system is fully wireless and battery-powered, and the Mega Trax team can automatically recharge the batteries on the fly, which means that the system can run the whole race without batteries’ having to be switched out.

Used previously at Fontana and Charlotte, the Rail Cam will be deployed for the Daytona 500 for the first time (it has also been available for Fox’s coverage throughout this week).

“For a long time,” says Davies, “we’ve been searching for ways to add to our coverage of the backstretch of Daytona — the only straight part of the track really — so having a camera close up and fast like the Rail Cam is going to really help [lead race producer] Barry [Landis] and [director] Artie [Kempner]. When cars are going 200 mph and you’re shooting them from up cameras, it’s difficult to [demonstrate] just how fast they are going on TV. But dynamic cameras like the Rail Cam give you the feeling of being on the track and realizing just how fast these cars are going.” 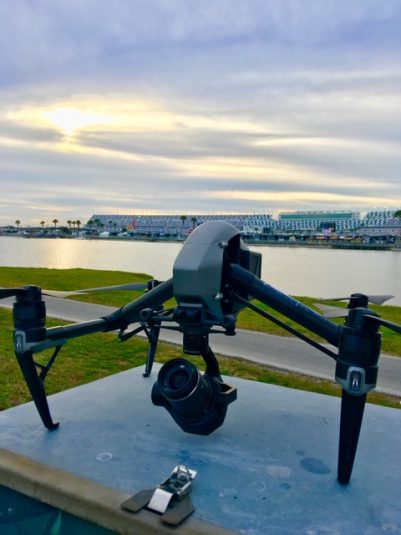 Fox will deploy an untethered drone for the first time at the Daytona 500.

In addition to the Rail Cam, Fox will use an untethered drone at the Daytona 500 for the first time (a tethered drone was used last year). The untethered system will be deployed beginning today on Fox’s Speedweeks coverage but will not fly over the racing or fan areas. The small, agile Helivideo system features a DJI Inspire 2 drone with an X7 Super 35mm camera.

“We’ve been shooting for this untethered drone on the backstretch, and we’re extremely excited about it,” says Davies. “We think it’s going to add a very different, cool new perspective.”

To enhance pit-row coverage, Fox is deploying a Digiboom body jib from Redrock Micro for the first time. The gimbal-stabilized system allows the operator to wear an extended arm with a stabilized camera at the end to provide unique shots inside the pits and over the wall. Fox Sports has been working with Redrock Micro since the NFL preseason, connecting the vendor with its best Steadicam operators to perfect the Digiboom system in advance of Daytona.

“We have played around with pole cams in the past, but, with this, we are able to have that extra extension,” notes Davies. “Pit row gets very congested with people, especially when Michael Waltrip is doing his grid walk prior to the race. This allows you to get up and over everything.

“During the race,” he continues, “this camera allows you to place the actual camera over the wall. That’s something obviously we can’t do with the manned cameras, so we’ll able to get some unique views of the pit and the crew chief’s area on top of the pit boxes. I think that it’s going to be a good addition is in terms of getting reactions and seeing the emotions coming out of the pits. We experimented with something similar last Daytona, and it was pretty cool, but this takes it to the next level. I think we’re onto something here. We think this one is going to be a useful tool for a variety of our other sports as well.”

Visor Cam Back in Action Among BSI On-Boards
A dozen cars will carry BSI on-board/in-car cameras (nine of them carrying four cameras apiece), including a Visor Cam inside Ryan Preece’s No. 47 car. Visor Cam, custom-developed by BSI, made its Daytona 500 debut last year and will be clipped to Preece’s helmet throughout the race on Sunday. 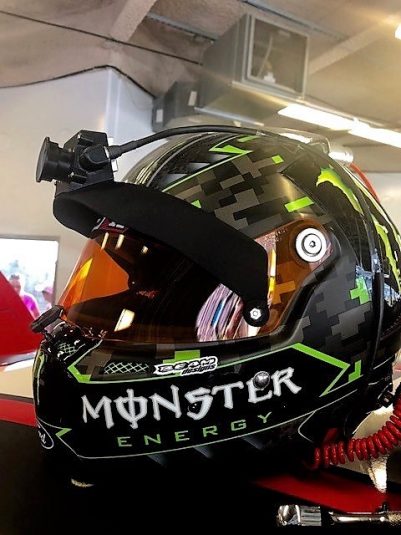 The Visor Cam, here at last year’s Daytona 500, will allow fans to see what the driver sees.

“Obviously, camera technology is at the forefront of everything we do with NASCAR; we’re always working on different places in the car to put the cameras,” says Davies. “We’re going to build on what we did with Visor Cam [last year]. Our announcers have said that is the most fundamentally realistic and illustrative camera placement in terms of making [viewers] understand what’s going on from the driver’s [perspective]. A lot of the work has to do with familiarizing the drivers with the technology and showing them how unobtrusive it is. We’ll continue to work on that, as well as play around with the placement of graphics for that shot.”

In addition, Canon has brought out its new 4K UHD-DIGISUPER 111X and 122X broadcast lenses, which played a major role in CBS Sports’ Super Bowl LIII and AFC Championship productions.

New Touchscreen Puts Loop Data Directly in On-Air Talent’s Hands
A new touchscreen in the Fox NASCAR booth enables analysts to break down data in ways new to NASCAR. Using loop data provided by SMT and NASCAR and captured at multiple points on a track, Fox NASCAR analysts will be able to dissect and compare where on the track each driver is making up or losing positions. This new ability provides the quickest way for the production team to tell the most accurate stories in near real time. 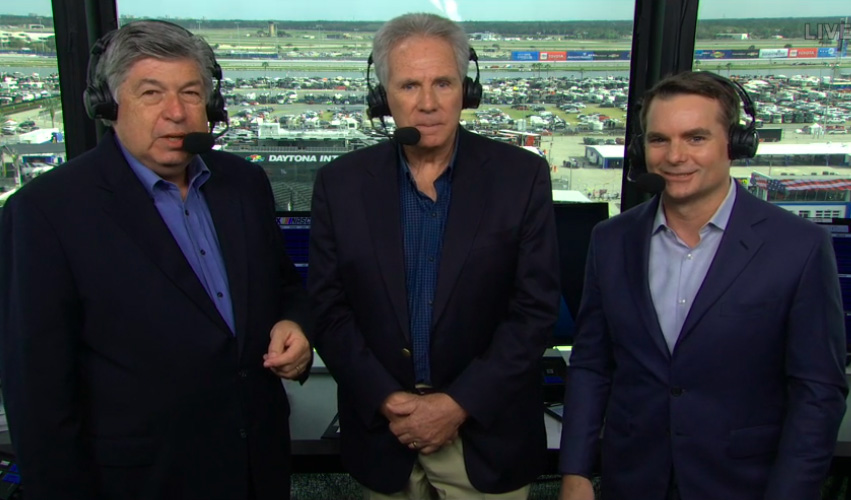 “One of the advantages of NASCAR is the massive amount of data that’s available,” says Zac Fields, SVP, graphic tech and innovation, Fox Sports. “Last year, the loop data was made available to us through SMT, so we were able to build out a number of different graphics. But, in the flow of a race, things happen so quickly that we felt we needed to find a way to put this data directly into Jeff Gordon’s hands.

“So we built a touchscreen [application],” Fields continues, “[giving] Jeff the ability to choose what cars he wants to talk about, which parts of the track he wants to compare, and a number of different time breakdowns based on an entire race or a single lap. As he selects elements within the touchscreen, a graphic will be generated that our production team can then present on the air as if it was any other graphic on the broadcast.”

Graphical Re-Creations Open Up ‘Virtually’ Endless Possibilities
Using SMT’s Broadcast Analytics system, Fox will be able to accurately re-create race situations in a virtual world during the Daytona 500 broadcast. This SMT technology allows the production team to create any virtual camera angle imaginable and play out the race in real time or revisit key moments to dive deeper into analysis. In addition to preproduced packages, Fox will deploy a double-box format in which one box shows live video and the second a re-creation of the race from a virtual camera angle.

“Since SMT is capturing every bit of data and telemetry happening in the race, we are able to put this into a 3D environment to re-create the race,” says Fields. “This allows us to compare any number of drivers to show their respective lines and to create custom camera angles that you would never be able to see because, [with] CG, you can go anywhere. That opens up some really cool possibilities. We’re able to visualize where time is made up or lost and create a visual representation for the viewer. We’ll be airing this tool not only in preproduction packages but also in replay format, or it could be used as live as well.

Daytona Serves as Coming-Out Party for Virtual Studio in Charlotte
Fox’s new Charlotte, NC-based virtual studio is also playing a major role in its Daytona coverage. Announced in October, the ultra-customizable 60- x 60-ft. facility uses Epic Games’ Unreel Engine to create instant 3D analysis of racetracks, cars, race shops, and more, with the ability to create unique and changeable spaces within the high-tech studio environment in a matter of hours. CLICK HERE for SVG’s story on the launch of the new virtual set. 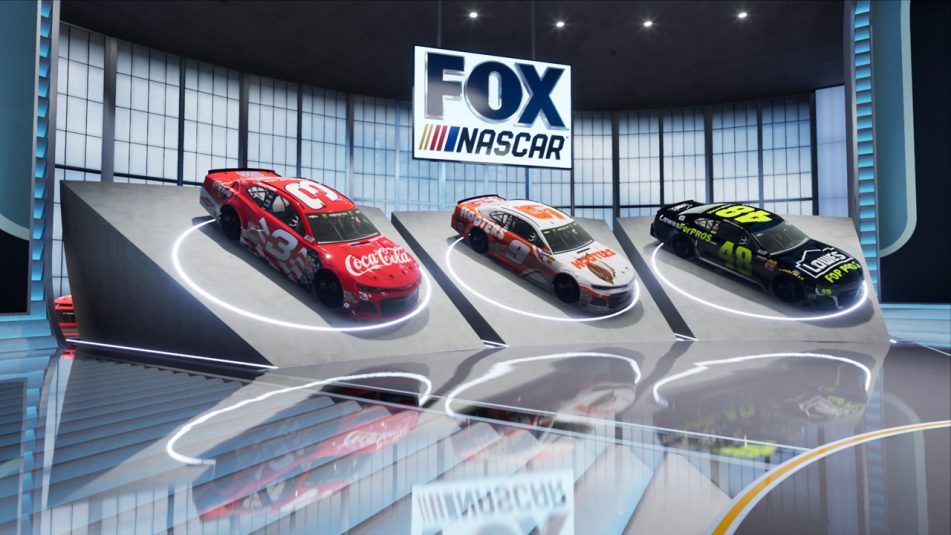 As part of its increased emphasis on the Charlotte facility, Fox continues to increase its use of IP contribution with 10 paths to Charlotte via PSSI and AT&T and four paths to Daytona this week. Fox also continues to grow its file-transfer operation, teaming with CMSI (Creative Mobile Solutions Inc.) to create workflows that allow more of its edit operation to be located in Charlotte rather than onsite.

“We’re becoming a lot more reliant on file transfer,” Davies explains. “We’re trying to achieve as much connectivity as we can back to Charlotte and to incorporate Charlotte as our studio. We think that’s an improvement because they are going to have all the resources of a state-of-the-art studio and editing facilities to integrate into the broadcast.”

Inside the Compound and Connecting to Charlotte
The production compound at Daytona houses a dozen mobile units, led by Game Creek’s Cleatus (known by another network as PeacockOne), which will be responsible for the main race broadcast. Game Creek’s Edit 1 (race edit, submix, and radio mix) and Edit 2 (graphics workspace and compound edit facility) are also on hand, along with facilities for robotic camera control, digital production, RF cameras and audio (BSI), and telemetry and graphics (SMT). Featherlite offices are in the compound and in the infield for the pit talent. PSSI’s C27 uplink truck is on hand for satellite transmission and fiber encode/decode. A pair of CAT Entertainment Services quad generators are powering the entire compound.

“Our NASCAR team is really a road family that reunites every February,” says Davies. “Our production team, our talent, our crew, the vendors are all phenomenal. We were lucky enough to win the [Technical Remote] Emmy last year, and I think that shows the dedication of our team. One of the things that I’ve always said is that the people who work on NASCAR understand their sport better than anyone. So I’m really happy that those guys were recognized for what they do, and, hopefully, we can do it again.”