If TV coverage of the 2019 NBA All-Star Game in Charlotte, NC, this weekend goes as planned, the game will have a legacy: the acceptance of Skycam as a production tool deployed to cover game action. It was used first on Friday for the Rising Stars game at the Spectrum Center and then during last night’s Skills Challenge. Tonight, for the main event, Skycam coverage not only will be integrated into the main broadcast on TNT but will be available as the main camera in an alternative broadcast available on TBS. 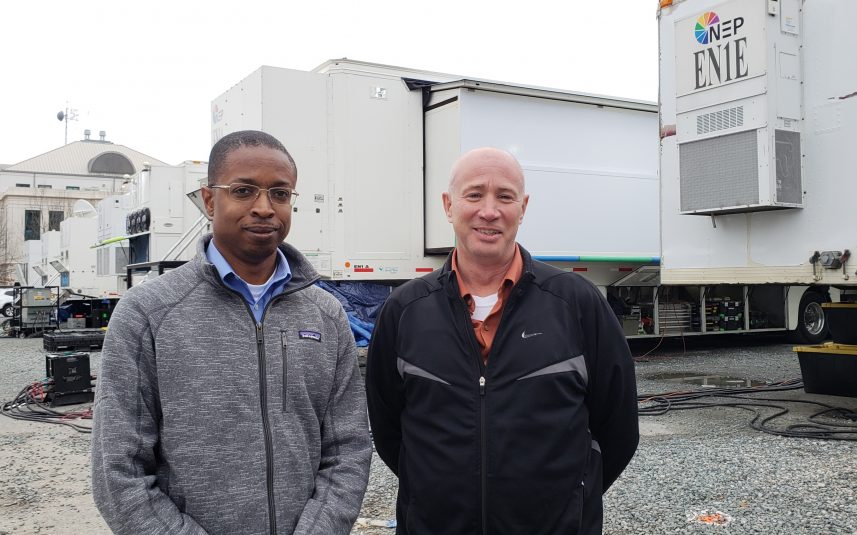 “People are enjoying the unique angles Skycam gives,” says Chris Brown, director of technical operations, Turner Sports. “It’s similar to what it brought to football coverage in that you can have a sense of the space between players.”

Skycam deployment began with the answer to a key question: how can it be used but not be distracting to players or, more important, actually get hit by a basketball in play? Helping to answer those concerns was the use of shot data from Second Spectrum, which tracks the height of every shot taken during NBA games. As long as the Skycam stays above that height (approximately 28 ft.), it should steer clear of any balls in flight. It also will be raised higher during the final minute of each quarter because that is when cross-court shots or passes are more likely to go above the heights of average shots.

“If there are going to be any problems [with the acceptance of Skycam], this group of elite players will be where it will be brought up,” says Brown. “But, for now, it is crawl before you run.”

Also new this year is the use of NEP’s EN1 as the production unit for tonight’s All-Star Game.

“It’s exciting to have that truck because of the additional resources it brings,” says Brown. “The audio console is a little bit bigger than the one on SS24, and it also has a larger router, so resource-sharing isn’t a problem.”

NEP has refurbished the EN1 C unit, and the layout allows the Turner production team to consolidate replay and super-slo-mo operations; in previous All-Star events, they needed to be split apart.

“We now have all of the EVS operations in one trailer,” says Brown, “and that has definitely helped to streamline that operation.”

Game coverage tonight will rely on approximately 40 cameras, with the major addition of a robotic camera on a large crane behind the basket. “Hopefully,” says Brown, “it will provide some dramatic replays.”

An important part of the weekend (particularly the Skills Challenge on Saturday night) is the use of RF cameras, and AVS is on hand with two RF Steadicams and two RF handheld cameras. “With only one vendor,” he says, “there are no frequency issues, and everyone is definitely happy with what they’ve provided.”

NEP’s SS16 will be used for the halftime show. NCPX is once again back for All-Star Saturday and will also be used to produce the live alternative broadcast that will air on TBS (the main broadcast, produced out of EN1, will be seen on TNT).

“The team that will produce the alternate broadcast will be in charge of directing the Skycam coverage during the All-Star game,” says Brown. “This will be first time we will have two independent productions running side by side.”

The TBS side-by-side telecast will have six of its own cameras, including one for a sideline reporter.

“The TNT telecast has 80% of the camera positions,” notes Brown. “That didn’t leave a lot of options for the side-by-side show, so, like the Final Four Teamcast, they will be using a lot of the TNT resources.”

The changes in the production-truck lineup aren’t alone in providing improvements this year. The NBA has brought in a new LED lighting system, installed by Baxter Controls, and all of the intercom systems have made the move to digital-based technology.

The LED systems, Brown says, have been installed in the arena on a temporary basis. Tests were conducted at last year’s All-Star Game in Los Angeles, and everyone was happy with the results. This year, all the events in the Spectrum Center will be lit by the LED systems, as will the theatrical-lighting systems that play a big part during the entertainment portions.

“[LED lighting has] been fantastic,” says Brown. “The colors look great, and it’s something we look forward to working with more as more NBA venues come online. It offers lower power consumption, but you also don’t need to wait for the lights to warm up before they hit their peak temperature. You can turn them on, and our video department can instantly adjust the cameras. Plus, there are no harsh shadows.”

Turner Sports and the NBA are also once again relying on Firehouse to manage communication systems and the RF environment. According to Firehouse VP Mark Dittmar, the All-Star Game is a complicated weekend, thanks to the vast array of external media entities that roll in to cover the festivities. There are approximately 600 intercom users: 260 inside the Spectrum Center and an additional 300 outside in the TV compound across the street.

The use of a Riedel Bolero wireless intercom system has made a difference. It operates in the 1.9 GHz spectrum band, allowing about 80 users and 140 frequencies to be moved out of the UHF band, which continues to shrink.

“We are packing things into a tighter and tighter frequency space,” notes Dittmar. “But, with Bolero, we can deal with interference significantly better because the transmitter and receiver are locked to each other. The scary part of digital intercoms is, when it all works, it’s awesome, but, when they don’t, you don’t tend to lose just one beltpack: when there are problems, they tend to be system-wide.”

Operations inside the arena will rely on the Bolero system, and those in the truck compound will rely on an RTS Adam system.

“Everything is dumped into the Riedel system,” Dittmar says, “And there is a clean line in the sand: everyone inside the building is on the Bolero system while those outside are on the RTS ADAM intercom.”

The All-Star Game is a unique event. The format is always evolving (this year is the second straight when the traditional East vs. West format for the teams are set aside), and the focus of the players is less on grinding out a win and more on having fun and putting on an entertaining show. That changes everything: the type of player access for broadcasters and others, the speed of play on the court, and the way technologies can be deployed by those on the production side.

“The players are having a good time,” says Brown. “That’s what makes it fun and interesting.”