Whether it’s the national anthem played before every game, the music ballplayers select to accent their walk-on to home plate, or the seventh-inning stretch when fans sing “Take Me Out to the Ball Game,” music has been an integral part of the baseball experience. To celebrate the soundtrack of the national pastime, the Grammy Museum has organized “Take Me Out to the Ball Game: Popular Music and the National Pastime,” a look at the connection between baseball and music.

The exhibit will open March 14 at the Grammy Museum, on the campus of the LA Live entertainment complex in downtown Los Angeles, and will run through the upcoming baseball season, until fall 2019.

The exhibit takes viewers through that connection starting in the 19th century, when interest in baseball-themed music was fostered through the sales of sheet music, through the rise of baseball songs as part of a new era of American music in the early 1900s to current-day popular music’s central role in players’ preparing to take the field. Genres from pop and jazz to country, R&B, and rock & roll are reflected throughout the exhibit.

Baseball and music had another Grammy connection this year. As part of the events surrounding the Grammy Awards on Feb. 10, Edward Meeker and the Edison Orchestra’s original 1908 recording of “Take Me Out to the Ball Game” was inducted into the Grammy Hall of Fame this year.

“Baseball and music changed with the times over the years,” notes exhibit curator Bob Santelli, founding executive director, Grammy Museum. “There was always an organist, and there was always singing during the seventh-inning stretch. But I think that baseball in recent years saw how well basketball was using music, specifically hip-hop, to engage its fans. So we’ve seen a lot more music integrated into baseball in the 21st century, especially with walk-on music for batters and relief pitchers. But it has always been there, one way or another.” 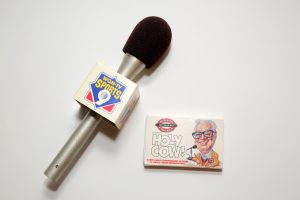 Sportscaster Harry Caray’s microphone is on display at the Grammy Museum.

The exhibit also acknowledges the contributions of broadcasters to music and the sport. In particular, the stick microphone used by sportscaster Harry Caray to “conduct” crowds in St. Louis, Oakland, and Chicago in the singing of the exhibit’s title song — he’s credited with popularizing the seventh-inning stretch throughout his career — is on display, along with more-esoteric items, such as the handwritten lyrics to baseball classics, including James Taylor’s “Angels of Fenway.”

“There are so many elements to the exhibit that we didn’t have space for most of what we wanted to show,” says Santelli, who wished his personal favorite, Vin Scully, who called Dodgers games on both coasts from 1950 to 2016, could have been represented by a mic as well. “There’s an amazing amount of artifacts we have here, though, and it really shows how music and baseball go together.”