Quantum will make a splash at NAB 2019 with some of its most significant innovations in company history. On the hardware side, the company is introducing the F-Series, a line of NVMe (non-volatile memory express) storage arrays that are up to five times faster than traditional flash-storage/networking systems. Incorporating the latest RDMA (Remote Direct Memory Access) networking technology, the F-Series provides direct access between workstations and the NVMe storage devices, delivering ultra-fast network performance. The F-Series is the first to be built on the new Quantum Cloud Storage Platform, which the company is also unveiling at the show.

“I believe this is the biggest innovation cycle in our company’s history,” says Eric Bassier, senior director, global product marketing, Quantum. “Both the F-Series and the Quantum Cloud Storage Platform were designed in conjunction with some of our largest customers. We are seeing more and more clients working in 4K and 8K, and they need this type of product for the performance that it offers. We’ve designed the F-Series not only to be the fastest product that we ever built, but it also has a highly available and reliable design from both a hardware perspective and a software perspective.”

NVMe Promises Faster Ingest, Edit, Finishing
As more media and entertainment organizations make the move to 4K/8K and high-frame-rate video production, NVMe-based technologies are increasingly important to enable faster ingest, edit, and finishing of content. With the F-Series, Quantum is looking to jump aboard this growing trend.

Using NVMe flash drives for ultra-fast reads and writes, the F-Series supports large-scale parallel processing and is designed for studio editing, rendering, and other performance-intensive workloads using large unstructured datasets. The F-Series is as much as five times faster than traditional flash storage/networking, delivering extremely low latency, and performing hundreds of thousands of input/out operations per second per chassis.

The first product in the F-Series is the Quantum F2000 storage server, which was purpose-built for NVMe and features RDMA (Remote Direct Memory Access) networking technology. The  2RU, dual-node server features two hot-swappable compute canisters and up to 24 dual-ported NVMe drives. Each compute canister can access all 24 NVMe drives and offers processing power, memory, and connectivity specifically designed for high performance and availability.

Although NVMe has traditionally been viewed as a pricey proposition, Bassier sees the F-Series enabling long-term cost savings for two reasons. First, since the F-Series is Ethernet-compatible, users can reduce costs by moving from a Fibre Channel to an Ethernet IP-based infrastructure. Second, customers who use a large number of hard-disc or solid-state drives will be able to reduce data-center rack space while still meeting performance requirements.

“Yes, NVMe is more expensive than SSD or hard-drive–based arrays,” Bassier acknowledges, “but this also helps customers to move from Fibre [Channel] to Ethernet and gain back rack space by reducing infrastructure. That will help dramatically offset the investment in NVMe to make this a really strong value proposition. While the main driver for this is more UHD and high-frame-rate–content [production], the justification for [investing in NVMe] is that it will also reduce infrastructure costs in so many other ways.”

Quantum Cloud Storage Platform: Software-Defined Architecture
At the core of the F-Series is the new Quantum Cloud Storage Platform, a software-defined block storage stack tuned specifically for video and video-like data. According to Bassier, the new platform offers a future-proof and reliable platform that eliminates data services unrelated to video while enhancing critical capabilities, such as enhanced data protection, flexible networking, and block interfaces. 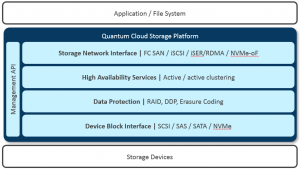 “What makes it really unique is that many of the other cloud platforms that are running on other storage arrays today aren’t designed specifically for video and video-like data,” says Bassier. “They were designed to run a database or to host VMware. And, while those [platforms] may have a lot of rich-data services that are very robust for a database, they just don’t apply to video.

“Quantum has so many years of experience working with video and software-defined architectures, so we stripped out all the services that we knew people didn’t need for video and engineered a platform to provide the absolute lowest latency and the maximum performance for a video[-production operation]. We retained a core set of services that are going to specifically meet the needs of our video-[production] customers.”

Bassier adds that the Quantum Cloud Storage Platform will be at the core of several future Quantum products as well as the F-Series.

NVMe in the Sports Market: Quantum Sees Major Potential
In addition to targeting the high-end postproduction market (for real-time editing of 4K and 8K content) and animation/visual-effects studios, Quantum considers the F-Series well-suited to sports-video–production environments, with tens to hundreds of cameras generating content. The F-Series is capable of handling multiple concurrent ingest streams and playing out this content in real time.

“There is a lot of interest for this product in the sports-production area,” says Bassier. “[We are seeing] major sports broadcasters building up new data centers, and one of their goals for those data centers is to be a 100% Fibre Channel-free. In their workflow, they have to get content edited and distributed very quickly in the course of a week, and they’re going to need the performance that this offers via Ethernet. So again, it’s kind of that combination of super-low latency and high performance without the need for expensive Fibre Channel infrastructure. So we think there is a huge opportunity for this in sports video.”

In addition to unveiling the F-Series and Quantum Cloud Storage Platform, Quantum is using NAB 2019 to announce that StorNext 6.2, a major new release of the company’s scale-out file system, is now shipping with the latest-generation Xcellis appliances. CLICK HERE for more on the StorNext 6.2 release and Quantum’s previously announced plans for next week’s show.