The Advanced Television Systems Committee has named Madeleine Noland as the new ATSC President. Effective May 15, she will succeed Mark Richer, who in January announced his plan to retire after leading the standards development organization for 20 of its 35 years. 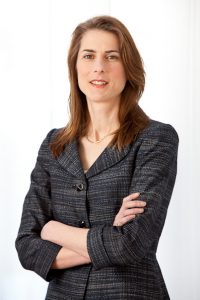 “The ATSC Board of Directors warmly welcomes Madeleine Noland as the incoming ATSC President,” said 2019 ATSC Board Chairman Lynn Claudy. “From a sea of highly qualified applicants, the ATSC Search Committee, headed by former Chairman Richard Friedel, selected the perfect candidate, and the Board unanimously agreed.”

“Madeleine is superbly qualified to lead ATSC into the future,” said Richer. “I couldn’t be happier, passing the baton to such a talented leader.”

She began her career in the television industry in 2004 with Backchannelmedia Inc., an interactive television technology developer. It was during her work there that she first started working on ATSC projects.

In 2012, she moved on to product and project management roles at Telvue Corp. before joining the LG Electronics CTO’s office in 2013. Noland has represented LG in a variety of industry organizations for over six years. Among other activities, in addition to her ATSC roles, she chairs the Ultra HD Forum’s Guidelines Work Group.

“I am humbled and honored to follow in Mark Richer’s footsteps, and I look forward with great enthusiasm to working with the talented ATSC Board and the hundreds of ATSC volunteer leaders. This is a critical time for the organization as Next Gen TV powered by ATSC 3.0 is commercialized in the months and years ahead,” Noland said.

Noland is the recipient of TV NewsCheck’s “2019 Futurist” Women in Technology Award and was named one of 2018’s “Powerful Women in Consumer Technology” by Dealerscope magazine. In 2016, she received the ATSC’s highest technical honor, the Bernard J. Lechner Outstanding Contributor Award recognizing her leadership roles related to the development of ATSC 3.0 Next Gen TV.

Credited on three U.S. patents for television technology, Noland is a member of the Society of Motion Picture and Television Engineers, the Society of Cable Telecommunications Engineers, and the Institute of Electrical and Electronics Engineers – Broadcast Technology Society. An alumna of the University of Massachusetts, she is a talented wind synth and keyboard player in a band called “Brave Pursuit.”