Panasonic (Booth C3607) showcased advanced products and technologies for live production here at the National Association of Broadcasters (NAB) show. Visitors previewed the future of live production in the Smart Studio, a set demonstrating the sophisticated features of the AW-UE150, Panasonic’s new 4K/HD pan/tilt/zoom camera, in integration with virtual systems. 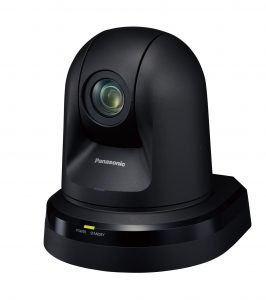 The HE42 features a 1080p FHD output, a wide horizontal viewing angle of 65.1 degrees, a 20X optical zoom and 30X i.Zoom. Equipped with a 1/2.3-type FHD MOS sensor, the HE42 provides an increased number of interfaces, including 3G-SDI, HDMI, IP (facilitating streaming and NDI|HX* support), and genlock for camera matching in live production.

An Optical Image Stabilizer (OIS) ensures that vibrations of the mounted surface caused by doors opening and closing, audio systems and other installed equipment are automatically corrected.

The HE42 is designed to produce high-quality video and precise control and movement for demanding remote production and IMAG uses. It is ideal for conference rooms, events, staging, distance learning and houses of worship.

The HE42, in both black and white versions, is slated to be available in June 2019 with a target suggested list price of under $5,000.

Live Production Suite (LPS) Demonstration of 4K/IP-Capable Switcher Platform
MoIP (Media over IP) creates the possibility of distributing production over several sites, which promises to bring about innovative and cost-effective distributed infrastructure, breaking the production free of the constraints of either locating an entire production at the broadcast facility or requiring a full remote production system on-site utilizing outside broadcast trucks. LPS builds on that flexibility, allowing the switcher fabric itself to be distributed (i.e., locating some switching gateways at a venue with the cameras and others at a broadcast facility in an engineering room).

Designed with the future in mind, LPS offers 4K and even 8K resolution and high bit-rate data transmission capabilities in MoIP. On the other hand, while SDI transport remains the dominant HD broadcasting systems, LPS presents an operation that can migrate to IP transmission gradually while using SDI equipment as required.

The newly developed LPS modules each center around the core functions of a broadcast switcher, namely: the Gateway (input/output), cross-point, M/E and System Manager. These units are combined to construct the switcher to the needed scale. There are two types of Gateway units – IP and SDI – and combining them, a hybrid IP/SDI input and output system can be created to satisfy changing user environments and needs.

Panasonic believes that MoIP (Media over IP) is a solution that will ultimately make the operation of a broadcasting station more efficient and enhance production value, and has been actively promoting it. By developing high-end broadcasting equipment that is compatible with IP transmission and even 4K/8K images, Panasonic continues to encourage the evolution and growth of the broadcasting industry. 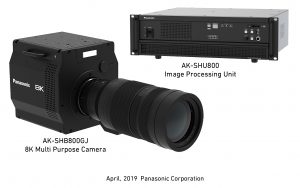 The AK-SHB800GJ 8K Multi-Purpose Camera is a compact, box-type camera and features an 8K full-size CMOS image sensor and EF lens mount. An 8K ROI multi-camera system can be configured by connecting the AK-SHB800GJ to an AK-SHU800 Image Processing Unit and a PC installed with Framing Control Software.

Up to four different HD videos can be cropped from a high-resolution, wide-angle 8K image, and each cropped image can be panned, tilted and zoomed individually, enabling the single 8K ROI camera to serve as four HD cameras. A multiple of 8K Multi-Purpose Camera units (maximum of eight units) can be connected and operated as one integrated system. By linking a crop area in one camera to multiple crop images in other cameras, pan, tilt, and zoom on the multiple crop images operate in link with the panning, tilting and zooming on the main frame. The automatic wide-angle distortion correction function achieves natural-looking images even in the videos cropped from the frame periphery. The camera control unit is alternately capable of outputting the full 8K image (as 4x 12G SDI feeds) usable for 8K ROI replay systems such as those provided by Fletcher Chicago at Super Bowl LIII.

The 8K ROI multi-camera system improves operating efficiency and reduces operating costs in live events and sports recording or broadcasting. The system helps to reduce camera setup, relocation and transport costs. It also eliminates the need to take up audience seats for the setup of multiple cameras.

Panasonic has been developing 4K/8K equipment and systems toward practical applications in 2020. The company continues to contribute to the further development of the broadcasting industry by helping broadcasters and video producers to acquire high-quality images and improve operating efficiency.

P2 Workflow Further Evolves in 2019: P2 Cast Links With Amazon Web Services and EDIUS on the Cloud
“P2 Cast on AWS” is a service that deploys P2 Cast, a news production workflow solution, on the AWS (Amazon Web Services) cloud. Trial operation together with EDIUS Cloud (Grass Valley) on AWS has already commenced, and preparations are being made to roll out the service within 2019.

While the current P2 Cast accesses the P2 Cast cloud server to download the content to a customer’s server, with P2 Cast on AWS, everything from editing to distribution can be implemented collectively from the cloud. Due to this, users can be released from the constraints of location and equipment, and conduct “offsite news operation” where the previewing, editing, distributing and steaming of the news footage and monitoring of the camera condition can be done from anywhere using a PC terminal connected to a network (versus a high-spec editing system at broadcast station). This maximizes the utilization of news production staff and contributes to improved news-to-air speed and other cost-efficiencies.

Further expansion of the connection to Panasonic’s integrated PTZ cameras, image processing and archives using the cloud are being planned. In the future, the possibilities of linking with OTT, big data and AI on the cloud will continue to expand.

In other P2-related news, the company is previewing a 4K P2 camcorder, a new shoulder-mount model that is targeted at 4K news acquisition and scheduled to be released this year. The company also announced a free firmware upgrade that will make the recently-released AG-CX350 4K compatible with P2 file format (MXF/AVC-Intra/AVC-LongG) recording; the upgrade is scheduled for later this year.