At the show, SVG sat down with CenturyLink Principal Solutions Architect Derek Anderson to discuss the NAB announcements, the rising demand for 100-Gbps infrastructures, the impact of at-home production on the transmission sector, and the evolving role of CenturyLink’s recently launched 53-ft. expando transmission trailer. 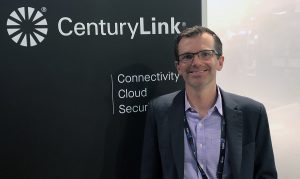 CenturyLink’s Derek Anderson: “What we’re doing now is focusing on the underlying infrastructure. We are continuing to build up our fully owned fiber infrastructure into sports venues.”

What are CenturyLink’s big announcements here at NAB 2019?

First, we announced that we’ve expanded our Vyvx Cloud Connect offering, which we launched last year with AWS, to include Google Cloud. The [platform] connects our Vyvx video-infrastructure network directly with major cloud providers, now including Google Cloud. That could be a direct contribution feed from sports venues, managed 100% privately with GCP for processing, encoding, packaging, archiving, and anything else you might need. In another use case, as more master-control functions are moving into the cloud, you can also acquire content going out of GCP and then support the distribution to OTT providers on a full-time basis.

Second, on the CDN side, we’ve partnered with Streamroot to create peer-to-peer networking solutions that can be used in combination with our CDN. Essentially, the platform combines the CDN and a mesh network to intelligently manage the video content. We see that as being really key to enabling rapid scalability for big live events for over-the-top delivery.

Third is the addition of IBM Cloud Object Storage. We now have a massively scalable object-storage platform that connects directly into our CDN for large-scale content delivery and management.

What has the reaction been to the Vyvx Cloud Connect platform since you launched it last September at IBC?

I think we’ve seen an extremely high demand thus far because of the cloud economics of “I want it now” or “I want it yesterday.” I see that appetite and the timeline for building new cloud-based workflows only accelerating. That connects nicely back to our underlying control systems for real-time services, which Vyvx has always done. With that underlying infrastructure and connectivity in place and now AWS and GCP added to the equation, we can [blend] services, and we’re leveraging the control systems we’ve had in place for a while.

I think there is a ton of experimentation in terms of what’s possible in the cloud for new workflows. There are established workflows for getting compressed video to the cloud, encoding and pushing that out to our CDN. But, when you get into the more bleeding-edge virtualized production workflows and origination playout, I think there’s still a lot of work yet to be done. But, from our standpoint as the on-ramp and off-ramp to put those environments in place, we’re open for business.

Are you seeing the demand for 100-Gbps connectivity rising in the live-sports-transmission sector, and what are CenturyLink’s plans when it comes to 100 gig?
Our first official foray into 100-Gbps architectures was for the U-21 UEFA Championships in Europe in 2017. We supported 100-Gbps backhaul for the Final from Poland to London for BT Sport: two diverse 100-gig infrastructures supporting uncompressed UHD backhaul. That was definitely positioned as a proof-of-concept technology trial, but it worked very well.

What we’re doing now is focusing on the underlying infrastructure to support that. As we have been doing for a number of years, we are continuing to build up our fully owned fiber infrastructure into sports venues. About 75% of all pro U.S. sports venues are physically connected on our infrastructure. In terms of the economics, we see that as being the critical foundation for enabling ultra-high bandwidth architectures.

On our roadmap for this year, we’re partnering with a few industry players to test out 100 Gbps. We’re looking to [transmit] fully uncompressed native-IP [signals] out of the cameras and using that for [at-home] or distributed production workflows. Although we are not announcing any in terms of 100 Gbps, I think we will have some exciting news later on in the year.

What do you see as the primary drivers for the rising demand for 100 Gbps?
It’s driven by [increased demand for] 4K. In the last one to two years, I think we’ve seen 4K [go] from very niche to nearly mainstream for big events, especially sports. We’re past the point of asking, “is this going to be another 3D?” The demand for 4K is definitely on the uptick, so that is going to drive the need for increased capacity.

And then, obviously, the move to native-IP workflows and the [approval of the] SMPTE ST 2110 suite of standards will have a major impact. When you think about doing native uncompressed IP production in a truck, you’re going to need to [transmit] that out of the venue, which will increase capacity needs.

And then, for [at-home] production, where you’re shifting resources traditionally in a truck [onsite] to some other [production facility] that might be a thousand miles away, you’re going to need a robust network infrastructure.

We see all that as a very natural progression because CenturyLink has been providing 100-gig services [in other industries] for a number of years. We’re just embracing the proven technology and capability we already have and bringing it into the video-transmission side of the house.

How do you expect the rise in at-home production for live sports coverage to affect the contribution industry and the connectivity needs of your customers?
I think it connects to the 100-Gbps evolution. At-home production clearly needs more bandwidth and capacity, whether you’re doing compressed or uncompressed camera feeds.

We’ve also definitely evolved our services portfolio. in addition to our classic video-transmission piece, we’re seeing more need for managed Ethernet capacity. Instead of the traditional encoding for an SDI handoff, customers may ask us to provide a highly reliable native-IP Ethernet interface, as well as … guaranteed diverse transmission paths into the venue and to their home site. That’s very much in our sweet spot, and we’re seeing that blend of services. While providing 100%-SDI video compression and transport is still very much part of our business, we’re also being asked to provide a host of IP and data services.

What other new developments from CenturyLink will impact the sports-media industry in the coming months
Last year, we launched our 53-ft. expando transmission trailer, which debuted for a large football event. We’re very excited about this trailer for major event coverage. In the past, we would need to be onsite weeks in advance, ship and deploy equipment, do the wiring, and build out all the infrastructure. Now we can just roll out a truck. It has a ton of capacity in terms of video monitoring, compression, and video transport, as well as fully equipped television-ops center so the team can be in their comfortable familiar environment.

We will also be using it in a unique way later this year for a major broadcaster’s coverage of high-profile sports outside the U.S.: we will deploy it as an adjunct to the customer’s broadcast center. I think it is an interesting evolution, particularly with regards to remote production, where there is so much video going back that needs to be monitored. This trailer can serve those increasing needs. It’s a very exciting use case that we think is going to gain a lot of traction in the future.