Speedcast made its NAB Show debut this month following its recent acquisition of Globecomm. With the Globecomm deal now complete, the company has rolled out the Speedcast Media Network, which integrates satellite, fiber, and cellular networks to provide secure point-to-point and point-to-multipoint live and linear digital-video delivery anywhere in the world with low latency and high availability. Speedcast has also added multiplatform processing and content-management capabilities from Globecomm to Speedcast Media Network’s portfolio of cloud video-processing services.

SVG sat down with new Speedcast SVP, Media, Barrie Woolston, who discussed why Speedcast is entering the media and entertainment market, how the company’s scale and resources will provide an advantage in this industry, and how he sees hybrid satellite/fiber/cellular contribution networks changing the way the media industry delivers its content. 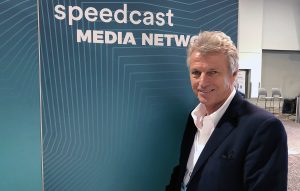 Speedcast’s Barrie Woolston: “We’ve bought a lot of businesses in recent years [and] are now focused on organic growth and how we can integrate [them] to get to the next stage.”

Since Speedcast is rather new to the media industry, can you provide a bit of background on the company?

Another big vertical for us is the oil and gas markets, which are offshore and require critical communications. In 2017, Speedcast acquired Ultisat and launched a government-focused [division] targeted to the U.S. government.

And then there’s a catch-all bucket that [serves] emerging markets, enterprise, corporate, and so on.

Why did Speedcast acquire Globecomm last year, and what are its plans for the media and entertainment sector?

Over the last five or six years, Speedcast has acquired 15 companies all over the globe in various sectors to add value to its established verticals. One of those acquisitions was Globecomm, which had a maritime business, an oil and gas business, and government business. Those three categories naturally integrate to Speedcast. But Globecomm also brought with it a systems-integration business and a media business.

I’ve been brought in to effectively look at what assets we have in the media space – in terms of physical infrastructure, personnel, and contracts – and how we can leverage that in the media world and develop a media vertical. My background is with Arqiva, AsiaSat, and other major organizations in this industry, so I know this sector quite well.

My view is, in two years’ time, if we end up building another Globecast, another Arqiva, or another Encompass, then we’ve failed. Because that’s not what we’re here to do. We’re here to build a business that is fit for the future, rather than fit for the present.

Why do you believe Speedcast can succeed in the M&E industry, and how will you attempt to create “a business that is fit for the future”?
One of Speedcast’s strengths is in IP data [transport]. We would be the first to say that IP data and IP media are two very different animals. But it’s still IP, and we are very aware of the fact that the media business is transitioning to IP. So we believe we are very well-positioned for this transition. One key investment we made is in a company called In Aria! Networks. They provide a proprietary software for IP transport of live media streams. We are now developing our strategy as to how we move forward with that and serve the IP needs of [the media business].

We’ve got scale beyond anything that the established service providers in this space have. We have 1,500 people around the world, 40 locations, 3,000 customers, and dozens of dedicated software engineers. By blending the Speedcast network and the Globecomm network, we have POPs [points of presence] in all the markets you would expect, and we have access to over 40 teleports, so we have plenty of infrastructure. We are a publicly traded company, so we are robustly funded, and we’re now going through an ongoing growth stage. We’ve bought a lot of businesses in recent years, so we are now focused on organic growth and how we can integrate those businesses to get to the next stage.

Being at NAB this week is all about promoting the Speedcast name and services. The Globecomm name is gone, but we have all the benefits of the Globecomm personnel, infrastructure, and all the great work that Globecomm has done over the years. And we will take that even further. Speedcast is here in the media market, and we’re now making people aware of the media network that we have. I’m excited about being here because I think we have an interesting opportunity to do something differently from what the market has seen in the past.

The media-contribution/transmission industry has recently seen an abundance of hybrid services combining terrestrial, satellite, cellular, and other connectivity into a single platform. How is Speedcast catering to the increased demand for these services?
We are heavily invested in satellite because that’s been the core of the established business, but we recognize the world is changing. Today, [customers] aren’t looking for just a satellite service or just fiber service or just cellular service or even just 5G. It’s a hybrid of all of that. And that’s at the core of the architecture of our Speedcast Media Network.

In the center of the Speedcast Media Network is a product called Vector, which was developed by Globecomm several years ago. We see it as a virtualized integrated playout and digital headend solution that simplifies the entire video-delivery chain for our customers. We think it’s a great product, and we will invest in it and further develop it for this market. But we will bring it to market on the basis of what the market wants, rather than what we believe the market wants. Hence, we’re coming out here and having conversations with broadcasters to find out the challenges they’re confronting today.