The company’s goal is to ‘harmonize’ distribution regardless of platform

After launching the Cirrus hybrid satellite/OTT delivery solution at IBC 2018, Eutelsat rolled out the red carpet for the new platform at NAB 2019. The satellite veteran believes that Cirrus will reduce the technical and logistical challenges faced by satellite-TV operators seeking to launch or upgrade their service offering – whether they are using only satellite or both satellite and OTT networks. In addition, Eutelsat highlighted its SmartBEAM multiscreen delivery product, which allows platform operators to deliver IP-native video content to portable devices via satellite.

SVG sat down with Eutelsat Americas CEO Mike Antonovich to discuss the market’s reaction to CIRRUS and SmartBEAM, the gradual growth of 4K distribution, the company’s role in NASCAR Productions and PSSI’s Technology & Engineering Emmy Award-winning at-home production workflow, and how he sees at-home changing production as we know it. 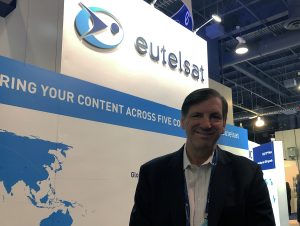 Eutelsat’s Mike Antonovich: “If you spend a couple hundred million for [sports] rights, you’re going to want a satellite feed. I don’t see that changing any time soon.”

What has been the highlight of the NAB Show for you this year?

Our good partner, PSSI, along with NASCAR Productions, was awarded a [Technology & Engineering] Emmy for their [at-home production] efforts. The ability to do 26 live camera feeds, 120 auxiliary audio and data channels all in a single transport across two transponders on Eutelsat 113 West A C-band worked flawlessly for the NASCAR events. We and [Mediakind] were both acknowledged by Rob Lamb when he accepted the award, which is very gracious of him.

As the at-home production model continues to become more popular, how do you see satellite connectivity playing a bigger role?

We’re seeing a lot of growth in [at-home] production, and the PSSI NASCAR project is great example of what can be accomplished. The big driver for us is the need for interactive data between the venue and the production facility. We’re supporting that with some of these new technologies along with PSSI, which is adding voice and auxiliary data to these transmissions. Now you can show up at a venue and set up circuits for your voice and comms, video, file transfer, and general-purpose internet all over a satellite link. It’s a true one-stop shop.

People require all those services [onsite] now, and they’re consuming more bandwidth every day. In the past, you just shipped all hard drives with the files you thought you would need for the event, but that’s not how it works anymore. Today’s workflows require [the ability to] access all that content back at headquarters and pull that data into the field on an as-needed basis.

I also think it’s important to note that live sports is becoming more and more interactive, and the need to feed streaming and OTT outlets with more feeds from the stadium is only growing. So there is more demand at the venue for bandwidth. And we believe satellite has a very valuable role to play in that.

Speaking of streaming and OTT, can you tell us a bit about Eutelsat’s new Cirrus hybrid satellite/OTT delivery product?
Since [launching at] IBC, Cirrus has been fully commercialized, and it’s been launched in two markets in Europe and the Middle East. It’s a live service now. The premise behind it is harmonizing the look and the feel of the way consumers access content across all means of delivery. Whether it’s going to a big screen or a handheld device, all satellite and OTT [providers] want the look and the feel of that experience to be unified and integrated. Here at the booth, we are showing how Cirrus can accomplish that easily and without a lot of headaches. We are demonstrating how you can view a seven-day look-back of all content on an OTT platform right on your phone with the feel of an EPG [electronic programming guide] from a traditional TV experience.

By July, we’ll be launching an iteration of that [operating] over satellite. Whether it’s traditional OTT over wired networks or wireless over satellite, we’re going to have a solution set that supports whatever you need, as well as direct-to-home and B-to-B distribution of content. It’s all about harmonizing the experience regardless of the platform.

What else is Eutelsat highlighting here at NAB 2019?
We’re also extremely excited about our SmartBEAM solution. While SDI will be around in the industry for decades to come, we understand that IP is the future and everybody’s looking to build IP infrastructure. We’re going to support that in terms of all the ingest and distribution over satellite and over terrestrial networks and harmonize the two. Where SmartBEAM is very interesting is [its use of] Wi-Fi as a means of transport or delivery. We can encode video natively from SDI into HLS, transmit that over an MPEG-2 transport stream into an appliance that sends that directly to the Wi-Fi router in an authenticated controlled environment. So you get the benefit of satellite — the one-to-many [model] as opposed to [individual streams] in a traditional CDN world — while still embracing IP.

It’s a great way to control not only cost but also quality of experience. I can encode once to a high enough bitrate that is acceptable for final delivery to a consumer, as determined by the programmer. The way the CDN business works, you surrender control of your network the minute you hand off the [stream]. They reformat it, reframe it, resize it to whatever the pipe is at the end. But, if the pipe at the end is Wi-Fi and you’re controlling the delivery of that Wi-Fi, you can control the quality and latency of that experience. Fundamentally, it provides predictive reliability and latency: everybody knows exactly when you get it. There’s a lot of interesting things we expect to see in the next couple of years around SmartBEAM.

The use of fiber and public internet for backhaul has grown significantly in recent years for contribution of live sports productions. How do you see the role of satellite evolving to confront this trend?
There’s a lot of demand for fiber, but fiber isn’t available everywhere, and it’s not always the most reliable means. There’s a reason that everybody still insists on a satellite truck for major events. I don’t care how many single threads of fiber are coming out of the venue, [broadcasters] like the comfort of having a satellite truck.

The satellite business is still strong, and I think it has a bright future. Clearly, a lot of things are going to fiber because of the economics it offers. If it’s a cost-center business, it’s probably going to fiber. But, if it’s a revenue producer, like major sports, they can’t afford to risk that revenue. If you spend a couple hundred million for rights, you’re going to want a satellite feed. I don’t see that changing any time soon.

Are you seeing more demand for 4K and HDR backhaul these days?
It’s still very developmental, but, clearly, satellite is the most efficient way to get 4K to market. Those 4K bouquets are still developing, and the business model around them remains challenging, just like the HD transition. Nobody paid more for ads because it was HD, but it was essential to go to HD nonetheless. I think you’re going to see the same scenario with 4K that you did with HD. ESPN, HBO, Discovery, and HDNet were first to launch HD. Then a year later, you had a dozen or so HD channels, then a year later you had three dozen. And on and on from there.

Where do you think we are in that timeline for 4K right now?
I think we are still at least two years away from its becoming mainstream. The good news is the TV sets are out there, so millions of people already have 4K-ready sets. It’s hard to even buy a TV set over 40 in. that isn’t 4K-ready today. The opportunities are there, especially for gaming and live sports. Now we’re going to find out if, in fact, there’s truly a broader market for 4K content.

One thing I am sure of is that you’re going to start seeing more contribution at higher data rates as a result of 4K and [at-home] production.