Live From the NFL Draft: Q&A – ESPN’s Seth Markman on Differentiating the ABC and ESPN Telecasts

The Walt Disney Co. is pulling out all the stops in Nashville this week, broadcasting primetime distinct telecasts on both ESPN and ABC for Rounds 1-3 on Thursday and Friday (plus a simulcast for Rounds 4-7 on Saturday). While ESPN is delivering a traditional Draft telecast focused on the X’s and O’s, ABC has brought in Good Morning America’s Robin Roberts and the ESPN College GameDay crew to create a show focused on the journey of the NFL Draft prospects.

SVG sat down with ESPN VP, Production, Seth Markman to discuss the production philosophy behind ABC’s new NFL Draft format, how his team is showcasing the city of Nashville, and how ESPN’s Draft coverage has evolved over the years. 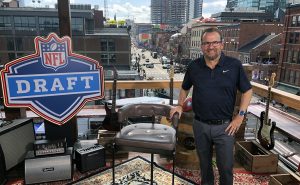 ESPN’s Seth Markman: Wherever we go [for the Draft], it’s always important for us to pay homage to where we are. Nashville’s got such a rich history in culture and music that allowed us to take it to the next level.

How does the NFL Draft telecast on ABC differ strategically from your traditional coverage on ESPN, and what were your primary goals from a production perspective?
We definitely wanted to do two totally different Drafts; we were not interested in simulcasting. We’ve felt for a long time that we could put together two separate shows, considering the amount of talent and ideas we have.


On ABC, we’re going to cater to a different audience and focus more on celebrating the journey of the players. Less on the X’s and O’s and more about who these guys are as young men. Where did they come from? As we dug in more and more on all these prospects, we found [they each] have their own unique stories. Many of them overcame so much in their lives to get to this point. We want to shine a light on that, so we’ve done features on all of these players and are excited to tell those stories.

Robin Roberts is going to handle most of that storytelling portion [of the telecast], and I can’t say enough great things about her. She has been amazing to work with, and she’s excited to be a part of this. And then we have Tom Rinaldi, who is such tremendous storyteller, in the green room interviewing some of the families and several other ESPN and ABC [on-air talent] as part of the show. We also have some celebrity guests coming by, including a few surprise guests on both Thursday and Friday.

Along with that, we have the power of College GameDay here, which is such a popular brand for us. The energy of the show and the way they play off the crowds is like nothing else. They are down on Broadway for the Draft. We’re utilizing a lot of the tools we have at our disposal as a company.

How are you looking to highlight the city of Nashville and integrate the local culture into the ESPN and ABC telecasts?
Nashville has been huge for us. As soon as we knew that the Draft was coming to Nashville, we knew we had to celebrate the city. Wherever we go [for the Draft], it’s always important for us to pay homage to where we are, but Nashville’s got such a rich history in culture and music that allowed us to take it to the next level.

Obviously, music is a huge thread between both of our shows. Many of our guests are musicians, and one of our correspondents on ABC is Bobby Bones, who is a popular local radio host, along with [country-music star] Luke Bryan.

How has ESPN’s coverage of the NFL Draft evolved and grown over the years?
We are still very much true to what we pitched to the NFL 40 years ago when we wanted to cover the Draft for the first time. The star of the show is the Draft. The kids getting drafted, the teams, the fans, and the excitement of all that. The feeling of optimism at the Draft in April is true for all fan bases, and that’s really what this event is about.

At the same time, over the years, we’ve obviously expanded significantly from where we started — at a hotel in New York City — to what we have now. The talent on the ESPN show is so well-versed in the Draft, the players, the teams, everything. And we have the best insiders in the business. We have Suzy Kolber doing an unbelievable job doing the interviews with the players.

The [production] elements this year are just amazing, especially the open to the show, which is so powerful. Our team puts in an insane amount of time and comes out with 600-700 of these highlights. Every single one is phenomenal; there’s nothing better than the ESPN Draft highlights. I remember growing up myself and watching ESPN broadcast the draft and thinking how great their highlights were. I think we’ve really set the standard, but we raise it every year.”

What does the College GameDay aspect on ABC add for viewers that they don’t get with the traditional ESPN telecast?
I think the best thing we learned having the GameDay show last year was how much the GameDay guys can add by knowing the players personally. Our Draft [analysts] on ESPN know the ins and outs and talk to all the NFL teams, so we’ve got that. But what they don’t necessarily have is as much experience with knowing the college players all year. [The Gameday talent] go to the campuses, and they are in production meetings [there], so they can add that personal touch to the stories from personally knowing the kids. Plus, they bring that fun factor and have amazing energy playing off the crowds.

A lot of people told me last year, “What took you so long to come up with bringing the GameDay guys to the Draft?” I guess that’s my fault because, obviously, now that we have them, I can’t imagine the Draft without GameDay.

All the ESPN/ABC sets here have a distinct Nashville flavor, what went into the look and design of these locations?
I’m very proud of the way they all look. I always say, When we go to a city, you should know exactly where we are the minute you turn on the TV. That’s important for me. I think, without a question, as I look around our sets, you know we’re in Nashville. We’ve infused them with Nashville memorabilia and aesthetic but really worked hard not to be stereotypical. We wanted to be authentic.