NFL Media is all over the Draft action in Nashville this week, delivering more than 76 hours of live Draft Week coverage. NFL Network has bookended Lower Broadway with a pair of sets located on the Draft Main Stage and attached to the legendary Tootsie’s Orchid Lounge honky-tonk bar. Connecting the two locations is a SupraCam point-to-point aerial system capturing the party happening on the streets below. In addition, NFL Media’s coverage goes well beyond the borders of Nashville, bringing in more than 60 live feeds from NFL cities across the country, including a record 23 Draft War Room cameras and live picks from every team’s home city in Rounds 4-6 on Saturday.

SVG sat down with NFL Media SVP, Programming and Productions, Mark Quenzel to discuss production philosophy for the Draft and how it has evolved over the years, how his team worked to create an authentic Nashville aesthetic for its Draft sets and broadcasts, how NFL Network differentiates its coverage from other broadcasters by incorporating NFL Nation coast-to-coast. 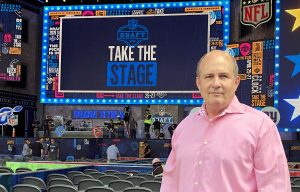 NFL Network’s Draft coverage and onsite presence this year really emphasizes the culture of Nashville. How did your team go about coming up with the Nashville-esque concepts here at the Draft?
The first thing we wanted to do was learn the city. Obviously, we come to Nashville for [Titans] games, but we’re in and out. So we came here for a walk-around to really get the vibe of the city. Where are the important places to be, and where are the important landmarks? Then we built our production plan based on that: how we are showing off the city and showing that we truly understand what their culture is all about.


That’s why we ended up selecting Tootsie’s for our big set. It’s an amazing [structure], and that will tell you everything you need to know about [our philosophy] here. We literally built two stories [protruding] right out of the building, and it’s designed to look exactly like Tootsie’s. It looks like an extension of the building, and a lot of [visitors] don’t even know that it’s not a regular part of the building.

Nashville is also a big little city, and Broadway is the epicenter, so we wanted to have that surround. We decided we were going to put one set on the Main Stage at the bottom of Broadway and another one five blocks up at Tootsie’s. And we have a two-point [SupraCam] cable camera system running all the way down Broadway back and forth. That allows us to show off those two locations, as well as all of the music and the bars.

And we have Good Morning Football every morning inside Tootsie’s to give that honky-tonk bar feel.

How does Nashville differ from previous Draft locations, and what unique challenges does it present for you and your team?
Last year [at AT&T Stadium in Arlington, TX] was more the exception to the rule now. We had it at the stadium, and it was all about football and less about the city. Texas is the epicenter of football, and it was a “football draft” from start to finish. And that’s the way we played it, generally speaking. [Our coverage in] Chicago was focused on the parks and Lake Michigan; Philadelphia was all about the steps [at the Museum of Art] and the incredible architecture of the city. Here we focused on the music and the culture of Nashville. And Vegas will be very different next year as well. That’s the fun part about the Draft now: each city is just so different from the previous city, so we basically start from scratch.

How has the shift to making Day 3 picks from around the country affected NFL Network’s coverage and production philosophy?
When we started doing the picks from the cities on Saturday, we made a strategic philosophical decision to cover the Draft as a national experience, not a local experience in the city [where it’s taking place]. In 32 cities, fans care a great deal about what their team is doing. So we decided to take the broad perspective and serve as air-traffic control for [live shots from] cities around the country.

The draft is like Christmas. You’re unwrapping the presents in 32 cities, so we need to capture the excitement in 32 cities. We work very hard on that. It’s very much a hub-and-spoke model: the first two days, we focus on the hub, and, on Saturday, we focus on the wheel.

This year is especially exciting because, for the NFL100 celebration, we’re doing [live shots] from all 13 original NFL towns, including eight towns that aren’t [currently NFL cities]. We also have a live pick from an Army base in South Korea on Day 1, so it’s truly a global event.

How has NFL Media’s coverage evolved over the years from a production perspective?
Remember, it hasn’t even been a decade since the Draft moved to primetime. That was the seminal moment that led to everything else. I think the evolution has been focused on how we have broadened it to become a fan event no matter where you were a fan. For the first 50 years, it was New York City and Radio City, and that was great. Now we are focused on fans in cities everywhere — both nationally and internationally.

It has truly become a pillar for us, along with the Combine. The Draft is the connective tissue that gets us from last season to next season. In order to do that, it’s important that this event continue to grow and be as big as possible because we’re competing with the NBA playoffs, NHL playoffs, and Major League Baseball. There’s no lack of sports content. If you’re going to cut through all that, you better have a compelling proposition. We want this weekend to belong to the NFL. And then training camp is only a couple months away.

There are obviously multiple outlets for fans to watch the Draft. How does NFL Network look to differentiate its coverage from other NFL Draft broadcasts?
The great thing about NFL Network is that we have an established audience, and the most important thing you can do in covering an event like this is play to your audience. Of course, you’re always looking to broaden your audience, but people who come to us already love football. We don’t have to convert them, which provides us with an advantage. The people that are watching us get football, so we stay a little more hardcore, broaden ourselves out to the hardcore, out of all these other cities.

The beauty of having partners like ABC and ESPN is, their coverage is going to be distinctly different from ours. ABC is focusing on the much more casual audience with an entertainment-based show, and ESPN has chosen to focus more on the hub, centering on the five [on-air talent] at the desk right here in Nashville. But we made the strategic decision a few years ago to focus on cities all around the country beyond just the host city with war rooms and Draft parties and live reports from teams’ facilities. We focus on the breadth the league has to offer, and we think that provides a very different product that hardcore NFL fans love.