The offerings are produced via both onsite and at-home workflows

NFL Network isn’t the only arm of NFL Media that’s bigger than ever at the Draft this year. The NFL Digital Media team has also been out in full force in Nashville, live-streaming a Draft Tonight post-show on NFL.com, producing podcasts onsite, and creating VOD content for the league’s digital properties and social-media channels. 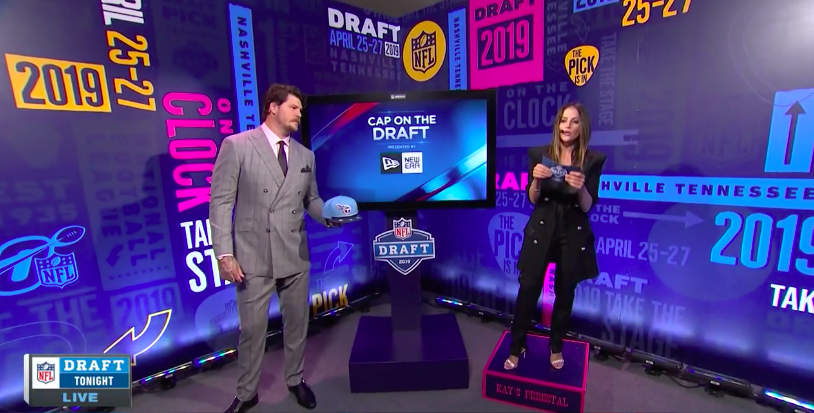 “NFL Network does a phenomenal job on the linear side, but our goal is to connect with fans in a different way and pull back the curtain to show who these players are as much we can,” said NFL Media Head of Digital Production Matt Schnider before the start of the Draft on Thursday. “The goal for NFL Media is to be everywhere and anywhere that fans can consume content. We are just providing another lens for them to engage with the NFL.”

The After Party: NFL.com’s Draft Tonight Is Live After NFL Network Coverage 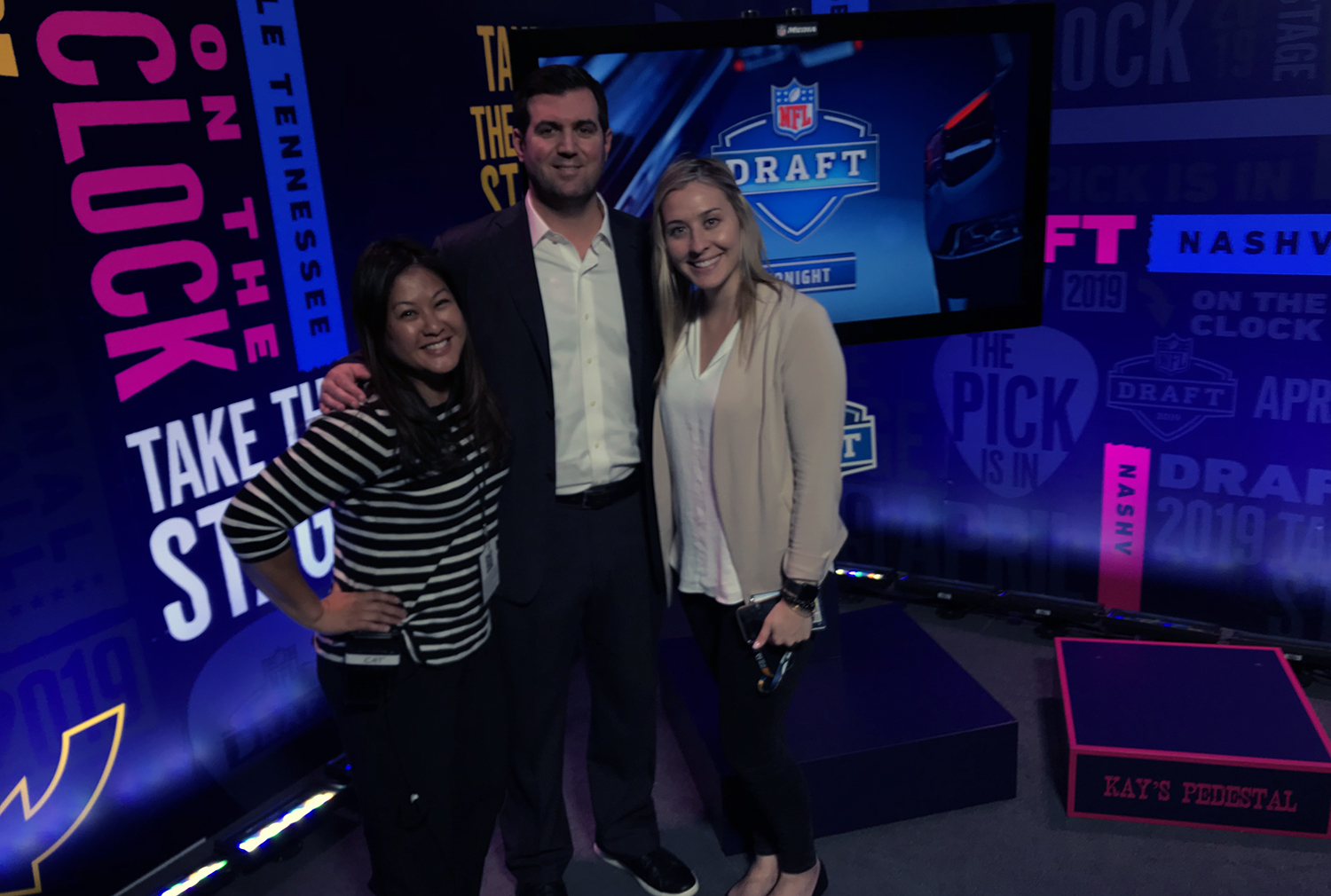 “We have a pretty robust plan as far as our digital programming is concerned,” said Schnider. “We needed this kind of space to pull off our goals. Our goal is to bring a lighter tone to the Draft. We’re not here to break down X’s and O’s but instead [to] welcome these players to the league. It’s likely the best day of their lives, so we’re here give them a chance to let their hair down and feel in the moment.”

The Draft Tonight set was covered by a single Steadicam to add movement and create a more intimate feel. Adams and Lewan also had a touchscreen monitor at their disposal, which they used to incorporate social-media elements directly into the show. 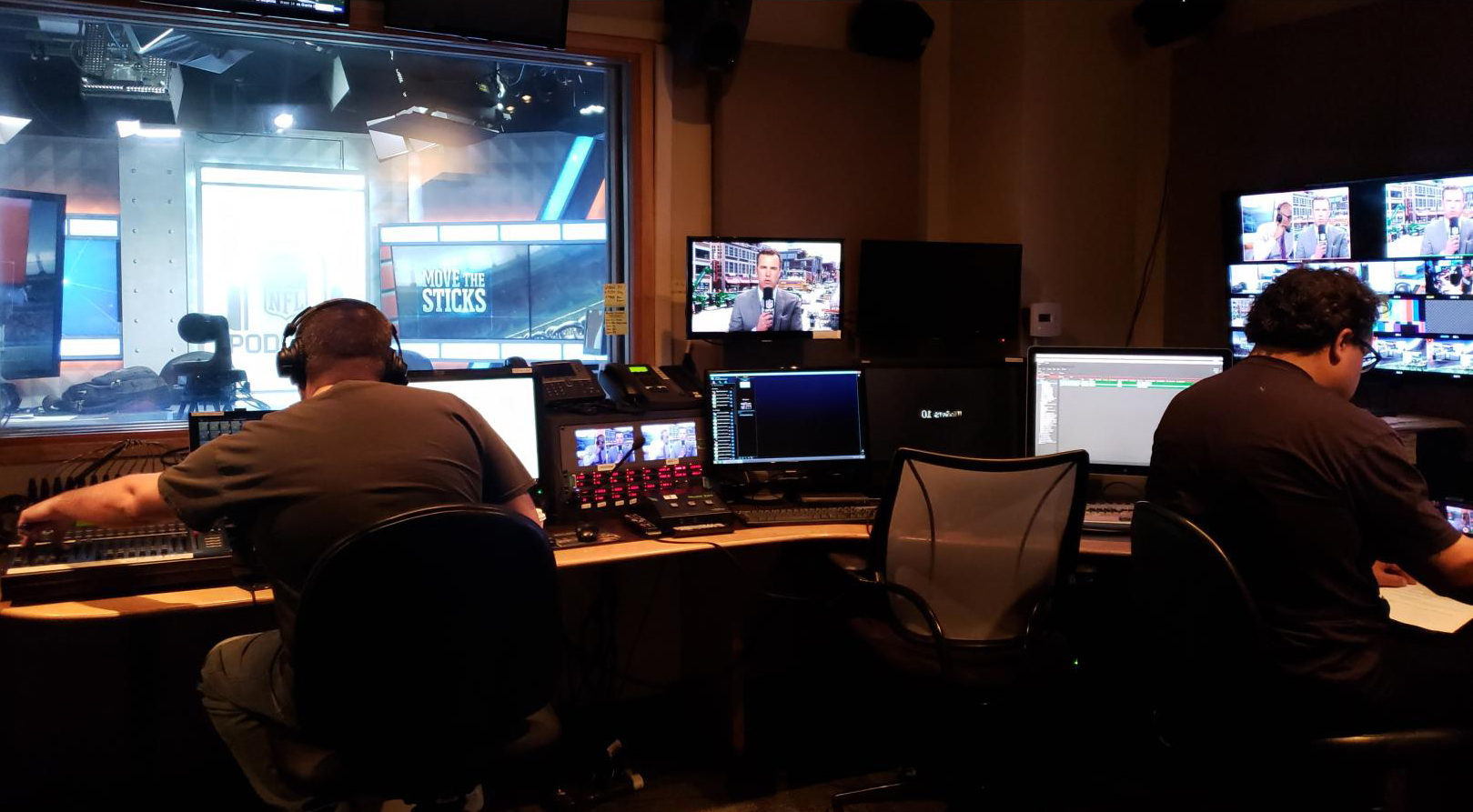 NFL Media’s Draft Tonight live stream and various podcast productions of the Draft in Nashville are produced out of control rooms at its HQ in Culver City, CA.

“We have a social-media mosaic on the touchscreen, which features real-time sentiments from influencers, from teammates, and from fans all over the country and the world,” said Schnider. “For the first time on our set, these players will be able to see what the world is feeling towards the future heroes of our game.”

The Friday and Saturday editions of Draft Tonight have shifted back to Culver City and feature Matt “Money” Smith and analysts Bucky Brooks, Maurice Jones-Drew, and Lance Zierlein for Rounds 2-7.

NFL Media also produced special NFL Draft editions of several of its podcasts onsite in Nashville, including the Move the Sticks podcast with Daniel Jeremiah and Brooks and The Dave Dameshek Football Program. 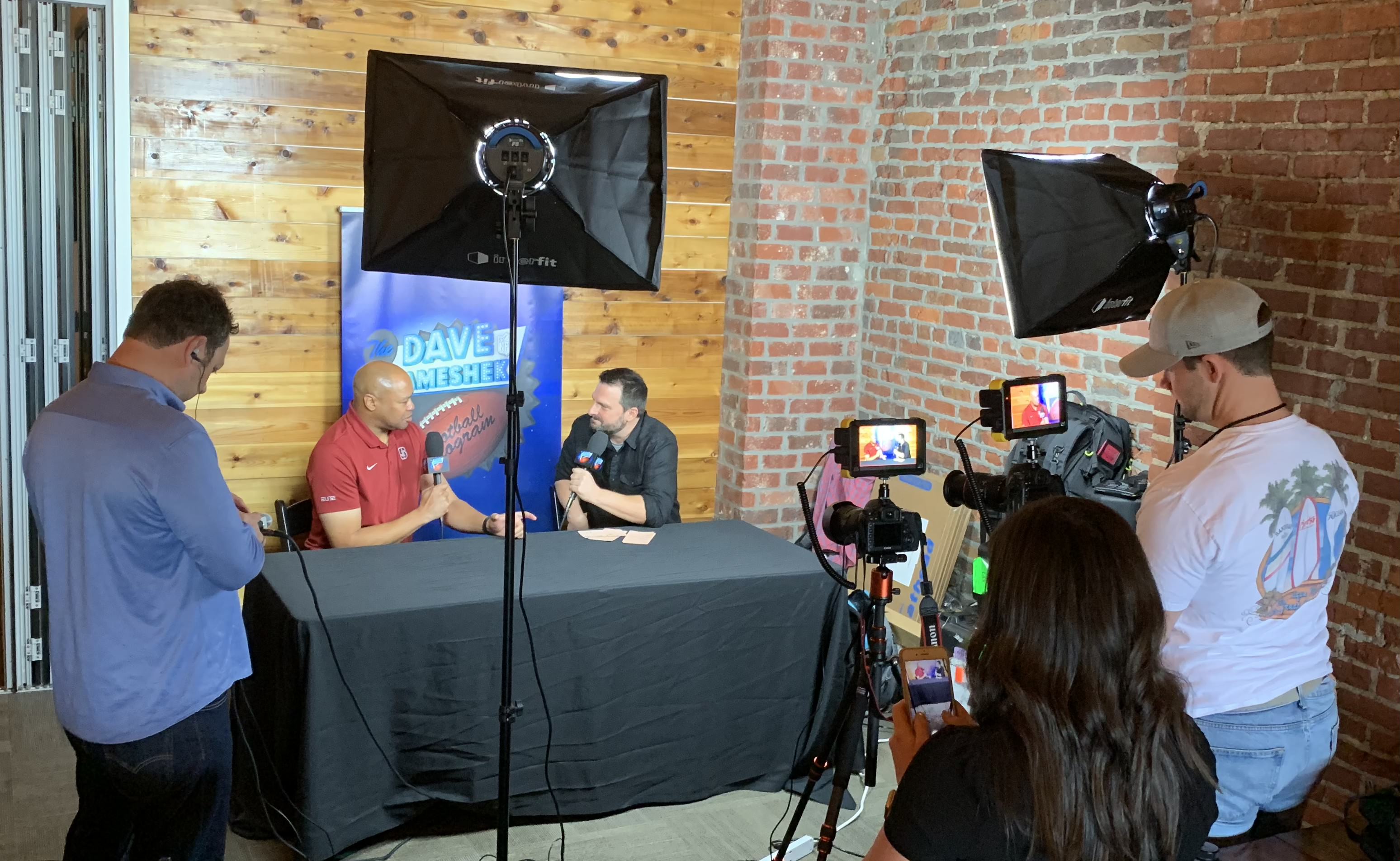 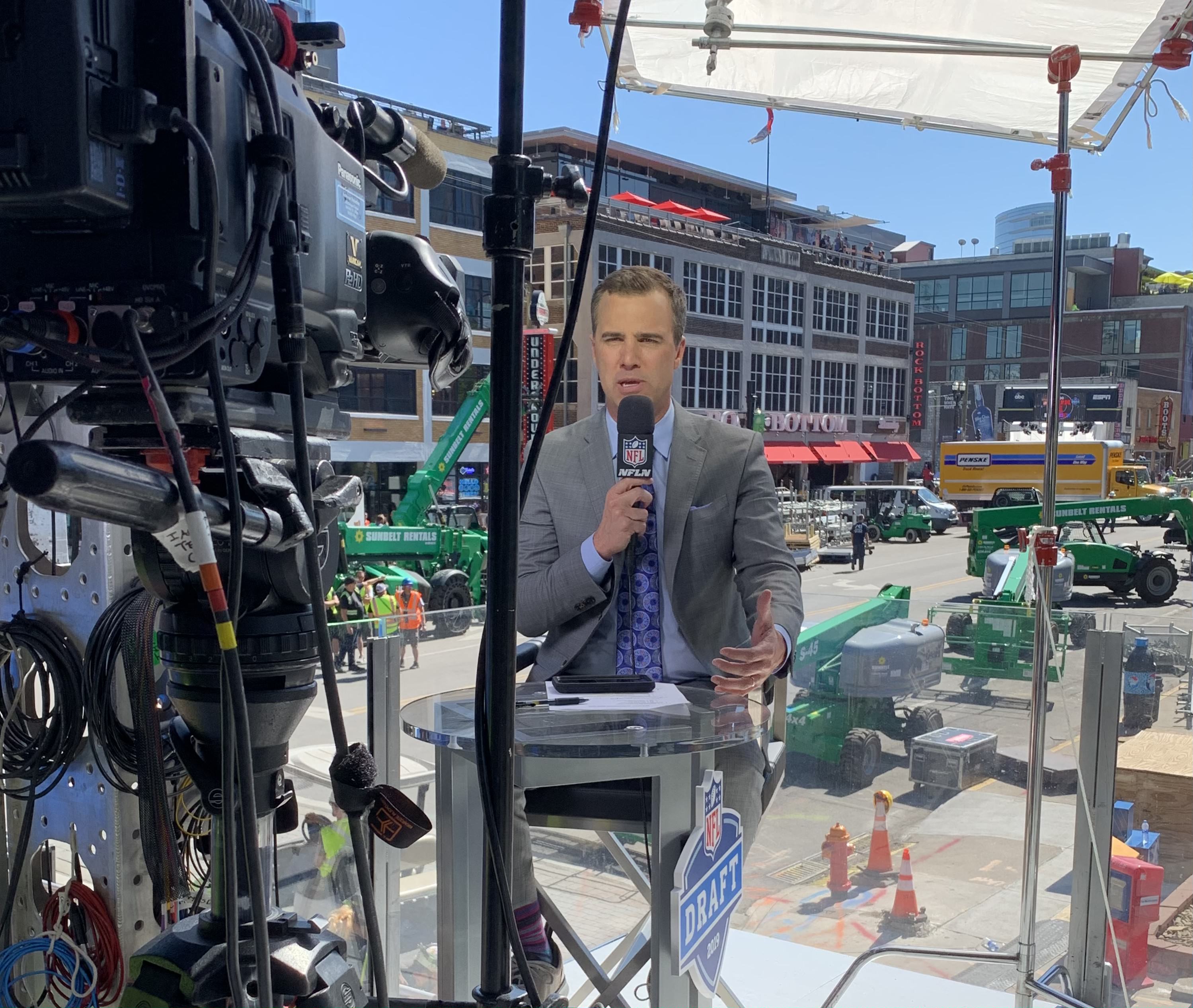 Daniel Jeremiah tapes the Move the Sticks podcast from the NFL Media theater stage at the NFL Draft in Nashville.

Additionally, Dave Dameshek has been live on location in Nashville all week, interviewing NFL Media analysts and top draftees once they’re selected. These interviews are shot with two DSLR cameras and a Zoom audio recorder and fed into an Atomos Shogun monitor/recorder, which combines the audio and video into a single feed. This is then transmitted to Culver City via the TeamCam system and delivered as an audio podcast and VOD clips. The addition of the Atomos Shogun is new this year to NFL Digital Media, which first used it at the NFL Owners Meetings in Phoenix last month. 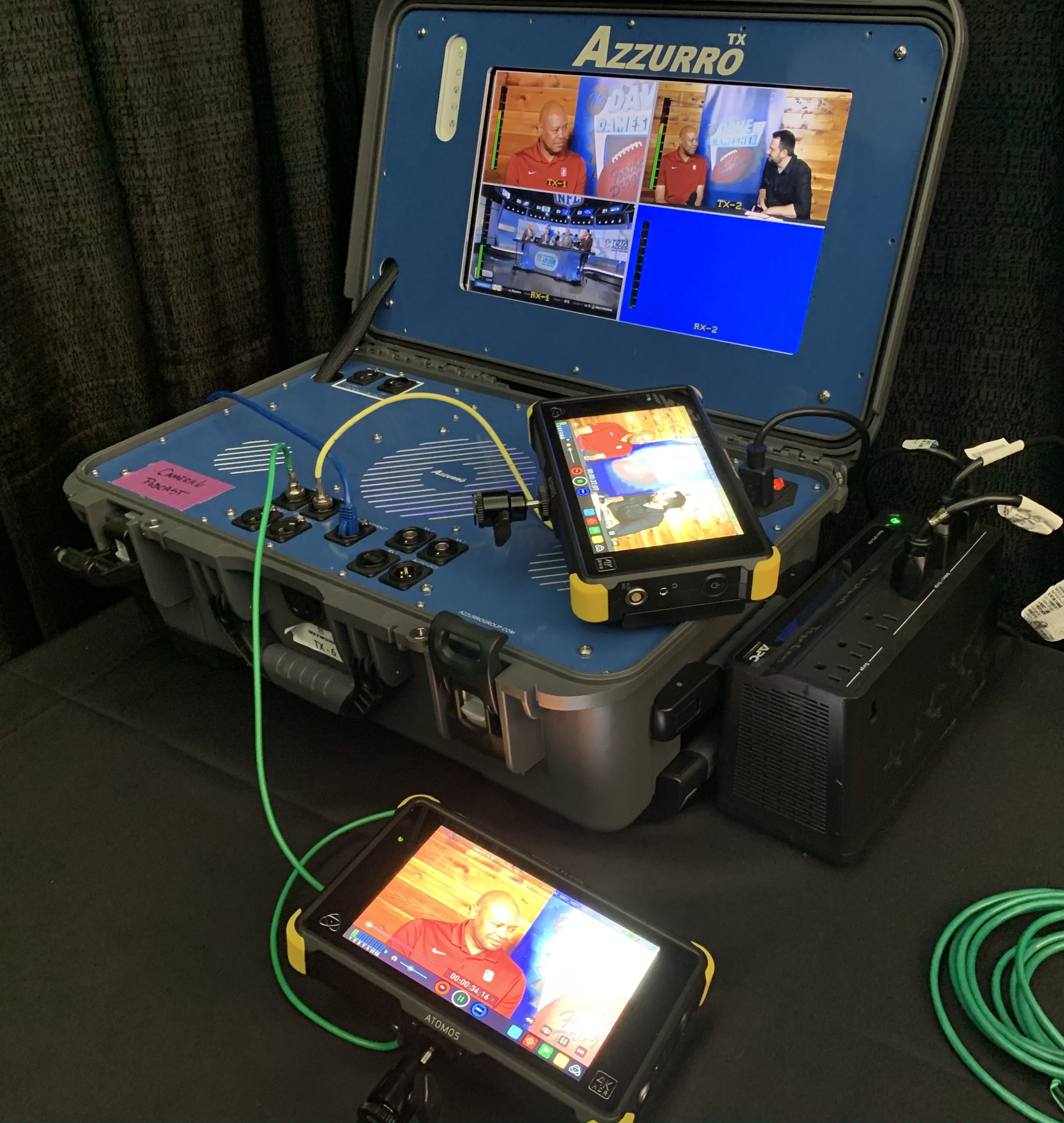 NFL Digital Media is using the Azzurro TeamCam system feed content to Atomos Shogun recorder/monitors in Culver City and marry the video and audio from interviews.

“Previously, we would have the video from the DSLR and audio from Zoom [recorder] on SD cards,” says NFL Media Associate Producer Eddie Murphy. “We would have to send them separately over to our editors [in Culver City] so they could marry them together. That was very time-consuming. The Shogun Atomos [recorders] are HDMI-compatible, so we can feed audio and video at once, and it marries them together. Then we can pop it right into the TeamCam to send back to Culver. Our editors can pull it right into their Adobe Premiere Pro [NLE software] and start editing it immediately. That makes our process a lot quicker.”

NFL Digital Media also sent out an ENG crew earlier this week to produce a segment sponsored by Zaxby’s featuring Dameshek and Titans linebacker Rashaan Evans interacting with customers at one of the fast-food chain’s locations. The show was streamed on NFL.com at 5 p.m. ET on Thursday prior the start of the first round. 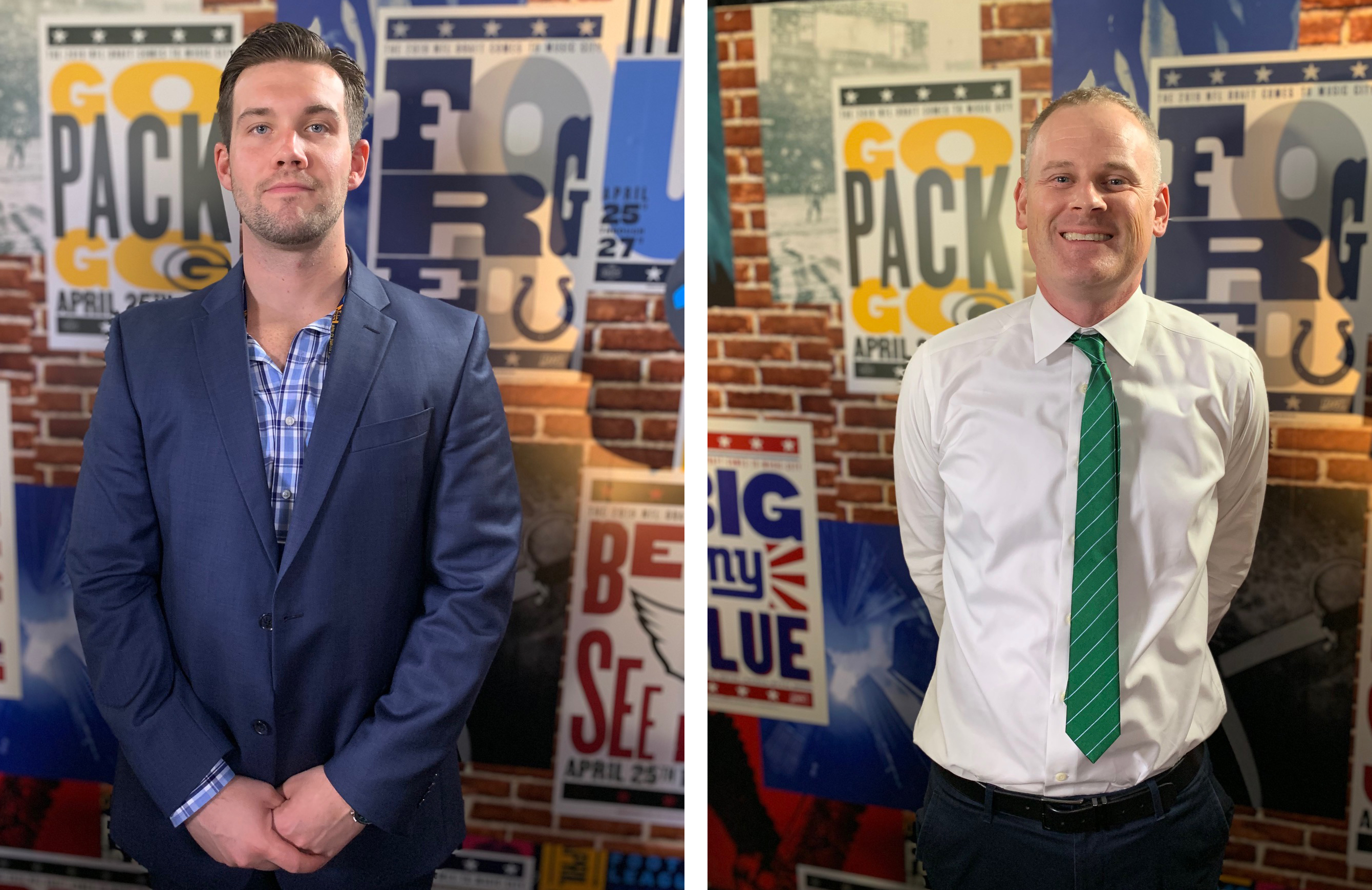 “Dave and Rashaan were at the drive-through location talking to Titans’ fans and having some fun with them,” says Brady. “Using TeamCam, we fed all of our cameras back to Culver that night, [and] our editors put together a show that we streamed on Thursday.”

NFL Digital Media is also producing live content across Twitter, Facebook, Instagram, and Snapchat. Content includes a Live Story on Snapchat celebrating first-round festivities from an all-access, first-person point of view. Additional coverage includes red-carpet activations with all the players onsite, behind-the-scenes interviews with draftees. Additionally, NFL.com’s Draft Tracker has live coverage of every selection in the Draft, including video and analysis of the picks as they happen.