Filmwerks, Illumination Dynamics, and others played key roles in Nashville

When it came to studio sets, the 2019 NFL Draft did not disappoint. Whether it was about quantity — ESPN erected five different locations throughout Draftville — or quality — NFL Network created its own Honky Tonk set attached to Tootsie’s Orchid Lounge — there were plenty of highlights from Nashville. 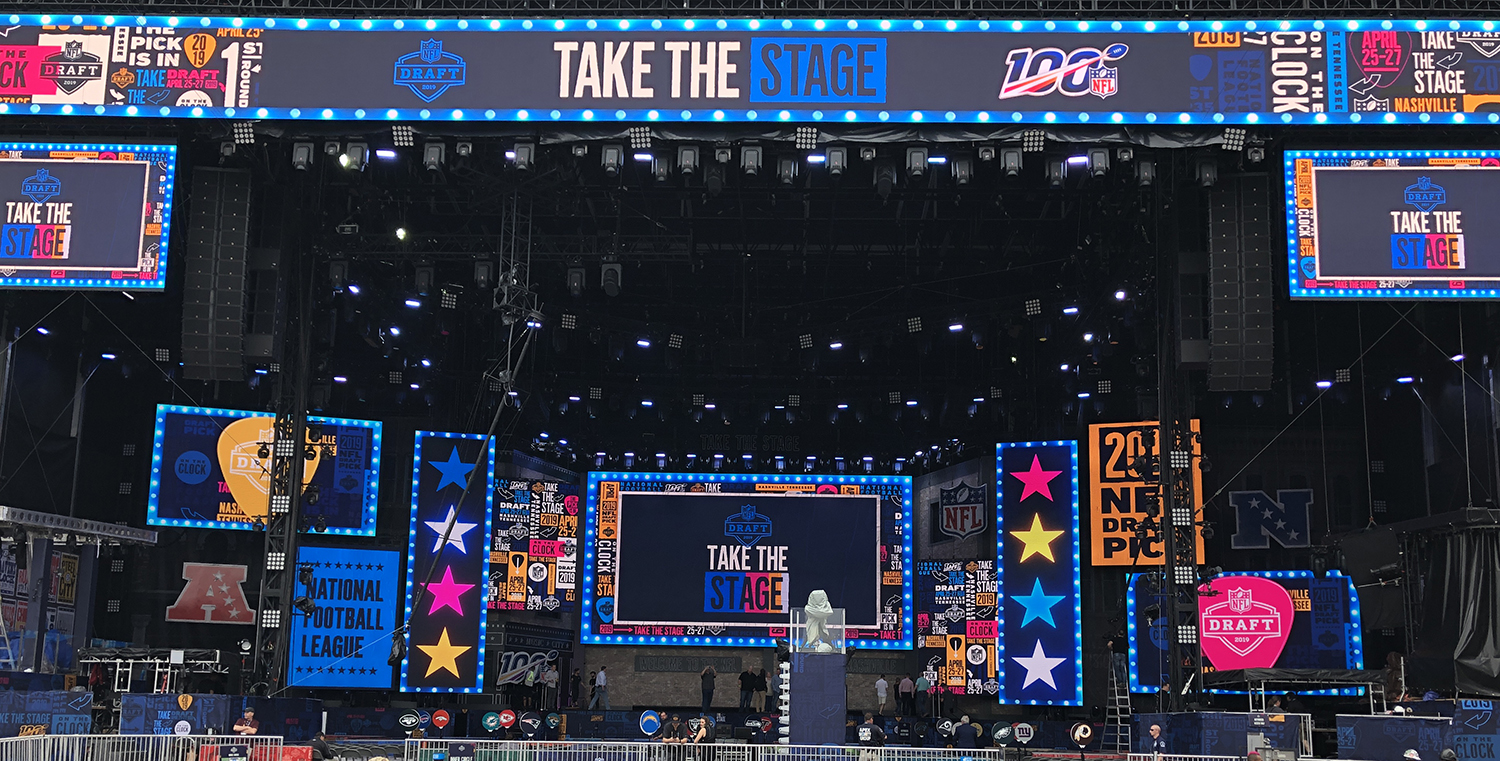 NFL Media bookended Lower Broadway with a pair of sets located on the Draft Main Stage and attached to the legendary Tootsie’s Orchid Lounge honky-tonk bar. NFL Network also took over the third floor of Tootsie’s each morning of the Draft, creating a set for Good Morning Football — complete with a house band.

Meanwhile, ESPN and ABC rolled out a quintet of sets: ESPN’s Main Stage set, ABC’s College GameDay set on 2nd Avenue and Broadway, rooftop and patio sets at Rock Bottom Restaurant and Brewery, and a set at the NFL Draft Experience at Nissan Stadium across the Cumberland River.

NFL Network’s set outside Tootsie’s drew plenty of attention, as it was designed to match the bar’s iconic purple-brick exterior. Designed by Jack Morton Worldwide and the NFL Media creative team and architected and constructed by Filmwerks, the ModTruss-based structure protruded out from Tootsie’s and appeared to be a direct extension of the three-story building (an overhang allowed spectators to traverse the public sidewalk beneath). 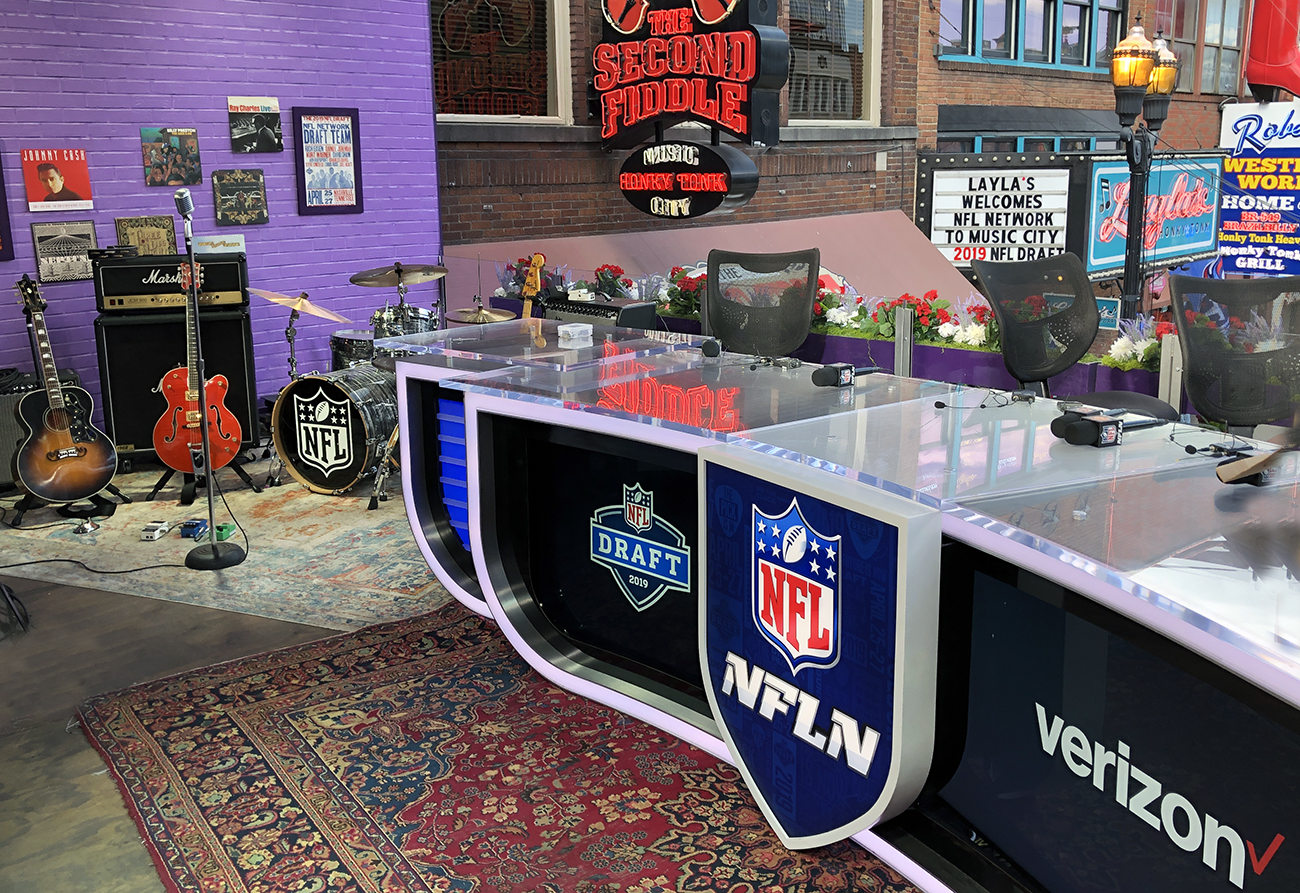 The interior of NFL Network’s secondary NFL Draft set has been designed to match the look of Tootsie’s in Nashville.

“The Jack Morton and NFL Network teams did the design and deserve a lot of credit for coming up with such a unique idea,” says Filmwerks Project Manager Bill Talaska. “Then it’s our job to get it as close to what they wanted as possible.”

Inside the 30- x 30-ft. set on the second floor of the structure were four hard cameras and a jib covering the four-person desk. The interior was also custom-designed to match Tootsie’s aesthetic, including guitars on display and framed photos of NFL legends (à la the Tootsie’s Wall of Fame). Filmwerks also provided a moving glass system, allowed NFL Network to convert the studio from an open-air setup to a closed set in just minutes. Filmwerks also provided the UPS redundant power system for the set, located on the lower-floor of the structure. 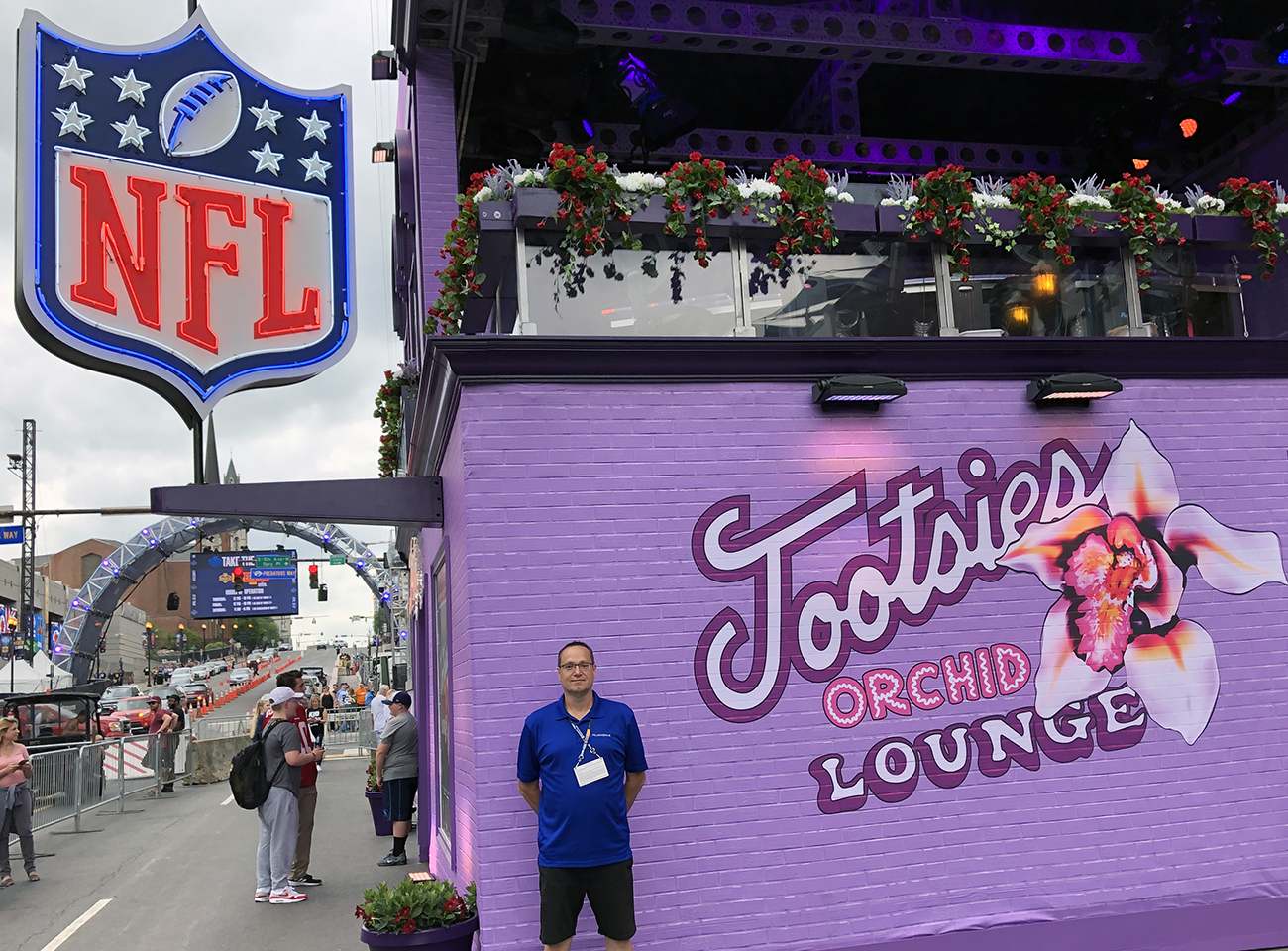 “We have a new full service in-house scenic shop that’s just launched, so we made every part of this set — from the light boxes to the neon signs to the color-matched brick to everything else,” says Talaska. “Since we are now a full service [company] from staging to power to scenic, we were able to essentially complete every single aspect of this set in-house. We want to provide a one-stop shop — from start to finish — from the initial design all the way through to the end.”

Filmwerks was also responsible for NFL Network’s Main Stage set located at the base of Lower Broadway.

“This is the farthest the NFL Network has gone from a scenic design aspect and it’s really impressive,” says Talaska. “We’ve come a long way in just four and half years [working with NFL Media]. From starting with Thursday Night Football, and then building the structures for all their events, to here in Nashville — they’ve pushed us quite a bit. But every event, we’ve been able to take it to that next level.”

ESPN’s sets in Nashville stayed busy throughout the week, serving not only its coverage of the Draft Thursday-Saturday, but also a parade of ESPN studio shows. 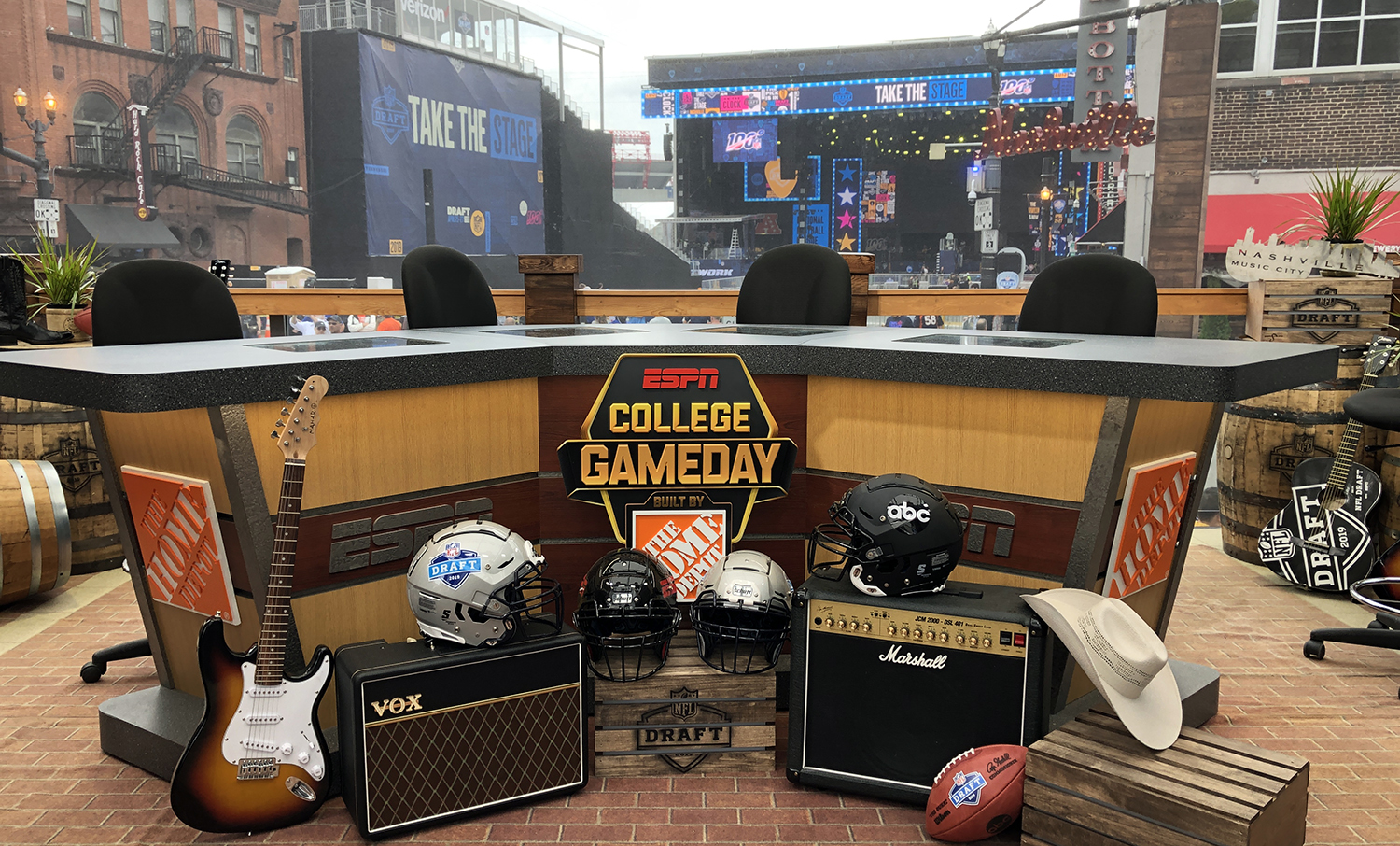 Illumination Dynamics provided power and lighting for ESPN’s truck compound and army of sets in Nashville. ID also played an integral role in creating the rooftop set atop Rock Bottom Restaurant and Brewery on Lower Broadway, where Robin Roberts was located for ABC’s coverage on Thursday.

“Illumination Dynamics was very excited to part of ESPN/ABC coverage of the 2019 NFL Draft. It was an amazing undertaking with multiple sets in not your normal type set up,” says Rich Williams, VP Broadcast Services, Illumination Dynamics. “The rooftop of Rock Bottom Brewery was a challenge not only to light talent but the endeavor to build a temporary covering to keep them dry in the rain that was experienced Thursday night.” 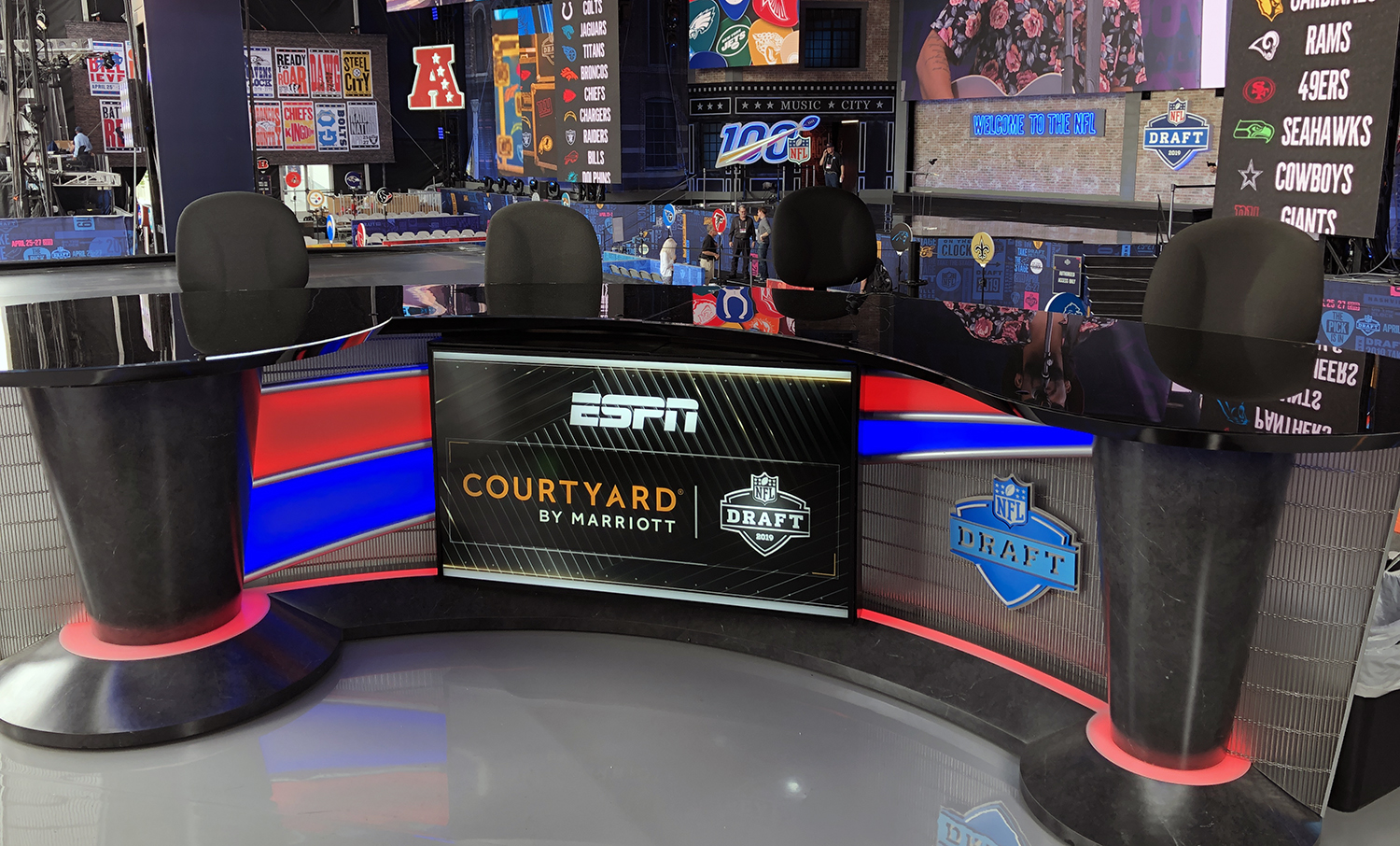 “We worked closely with ESPN scenic to get the right look and incorporated some new products [featuring] LED tubes that are battery powered and wireless with Bluetooth for color changing,” adds Williams.

In terms of power, ID provided Quad 300kw for all ESPN TV trucks, a twin 175kw for the College GameDay set location, and ran power for ESPN’s roof and patio sets located at Rock Bottom from the main TV compound.