Coverage extends to Derby Day parties around the country

Each spring for 18 years, the NBC Sports Group operations team has pulled into Churchill Downs and built a Super Bowl-size production in a week — half the setup time allotted for a Super Bowl telecast. And NBC’s 19th consecutive Kentucky Derby production this weekend is bigger than ever, with a new high-speed robo at the finish line, a pre-race set in the paddock, live feeds from Derby parties across the country, and a new digital companion show focused on Derby betting. 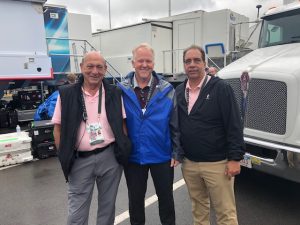 “This is easily the toughest show we do all year,” says Tim Dekime, VP, operations, NBC Sports Group. “We always equate it to a Super Bowl, except we only have one week to plan and set up, as opposed to being onsite for two weeks at a Super Bowl. It is incredibly difficult, and there are so many moving pieces: 16 talent roaming the track, more than 50 cameras, and multiple sets. It’s a daunting task to get this done, and I think we all feel a lot of pride each year when we’re able to pull it off.”

The Peacock’s 18 hours of Derby Week coverage will crescendo on Saturday with seven hours of live coverage that includes eight races: five on NBC and three on NBCSN (on top of the 10 races broadcast on NBCSN Thursday and Friday). NEP’s ND1 (A, B, C, and D) mobile unit will be serving NBC’s linear production; SS25 (A and B) will handle the NBCSN and NBC Sports Bet: Derby Special streaming show.

52 Cameras Aim for an Intimate View
Headlining NBC Sports’ 52-camera complement is a new reverse-angle 6X-slo-mo robotic attached to the finish-line pole at Churchill Downs. Provided by Fletcher, the robotic system features a Sony HDC-P42 split-block camera and has been covered in white to match the iconic finish-line pole. 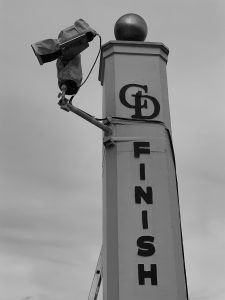 NBC has attached a reverse-angle 6X-slo-mo robotic camera to the finish-line pole for its Kentucky Derby coverage.

“It’s a more intimate look than our typical super-slo-mo profile finish, but it will definitely adjudicate a finish as a 6X-super-motion camera,” says NBC Sports Coordinating Producer Rob Hyland. “And we’re really excited about having another look at the finish of all of these major races over the next few days.”

The Bat Cam two-point aerial system, which debuted at the Derby last year and was used for all three Triple Crown races, returns this year to cover the backstretch. The system offers a perspective of 15-18 ft. above the track and travels at speeds up to 80 mph.

In addition to its standard 80-ft.-high main camera tower at Turn 2, NBC has deployed a second 50-ft.-high tower this year to replace a previous rooftop position that was lost because of track renovations.

NBC is also testing out a new Admiral Video gooseneck camera in the booth focused on race caller Larry Collmus and is considering it for the NBC Sunday Night Football booth this fall.

For the first time, NBC’s Mike Tirico, Jerry Bailey, and Randy Moss will have a 21- x 18-ft. showcase set overlooking the high-traffic paddock area for the first half of the Saturday NBC show. The concept was inspired by NBC’s pregame coverage at last year’s Colts-Chiefs AFC Divisional Playoff Game at Arrowhead Stadium in Kansas City, in which the pregame show began outside the stadium and then moved inside.

“We began that pregame show outside the stadium around a sea of thousands of people, braving the elements that day [because] there was a big snowstorm in Kansas City,” says Hyland. “It made me think, How can we connect our horse-racing announcers to the fans, the atmosphere, the excitement, the energy of the day? So Mike, Jerry, and Randy will be presenting the show from the paddock with that sea of people in the background. I think it will change the overall energy for the first half of the show.”

At roughly 4:45 p.m. ET, the talent will be transferred through the sea of spectators in the paddock to NBC’s other set, located at Turn 1, where Tirico and company can see the horses making their way from the barn area to the paddock.

“We’re doing a few dry runs with golf carts and security moving the talent from the paddock to our Turn 1 set,” says Dekime. “It’s going to be a little complex, but we’ll be ready.”

Betting Takes Center Stage on Linear, Streaming
Once the NBC broadcast talent departs, the paddock set will be taken over by the new NBC Sports Bet: Derby Special digital companion show. The first-ever Kentucky Derby Day betting show will be streamed live on NBCSports.com/Bet and the NBC Sports app beginning at 5 p.m. Hosted by Ahmed Fareed, the 30-minute show will provide last-minute tips. 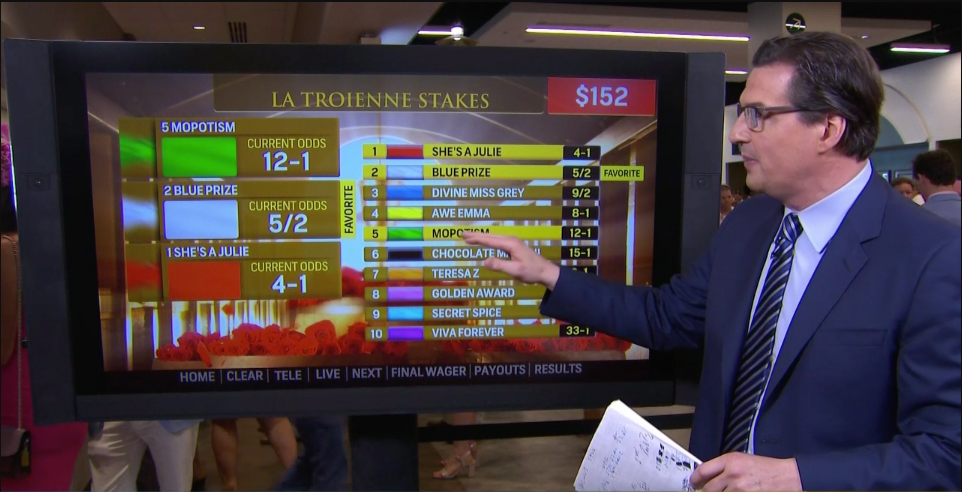 NBC Sports handicapper Eddie Olczyk has an SMT GOTO interactive touchscreen in the betting area at Churchill Downs to show viewers how experts bet on each race.

Although betting and live odds have always played a major role in NBC’s coverage, Hyland and company will lean into the angle even further this year, with much of the live data feeds provided by SMT. Handicapper Eddie Olczyk will have an SMT GOTO interactive touchscreen in the betting area at Churchill Downs to show viewers how experts bet on each race. The system is interfaced to live tote feed from Churchill Downs, allowing viewers to understand how much different types of bets will pay out for each race.

“One of the takeaways I had from watching last year’s Derby show on NBC is that I don’t think we give Eddie Olczyk enough time to explain his selections and why he’s making those selections,” Hyland says of NBC’s strategy toward betting during the broadcast. “We really want to give Eddie more time throughout the entire day to educate, entertain, and inform the casual viewer on what goes into his decision-making and give some more time to the betting in our show to have a few back-and-forths between Mike, Jerry, and Randy.

SMT’s DMX system interfaces with Churchill Downs’ tote and timing data, which is used to push live odds and results data to all NBC and SMT graphics systems. SMT Scoring displays are also used by talent and production to view race and odds data for each race.

In addition to its role on the betting side, SMT’s virtual-graphics tools will once again play a major role in NBC’s telecast. SMT ISO Track system, which is available to NBC’s production team for both live and replay use, will track featured horses in each race to give viewers a better view of their path around the track. SMT’s Live Track Map and Leaderboard show the position of the lead horse on the track with live timing splits in NBC’s telecast. NBC can display live odds data so that viewers can quickly ID the favorites’ and long-shots’ positions during each race. NBC’s talent will also use SMT Telestrator throughout the coverage.

Rolling Out the Red Carpet — In Louisville and Across the Country
Of course, NBC’s Run for the Roses coverage is about much more than just the action on the track. The network will once again spotlight fashion and glamour at Churchill Downs and, for the first time, will showcase Derby Day parties across the country.

The broadcaster also is trotting out a 360-degree “GlamCam” (often used on awards shows) for its red-carpet coverage, allowing fans and celebrities to step inside the device and have their outfit and selection for this year’s Derby documented in a dramatic 360-degree environment. The image will be pushed automatically to their social-media handles within seconds.

In addition, for the first time, NBC Sports will deliver “live look-ins” on Saturday from several Derby parties across the nation, including at locations in Denver (Denver Performing Arts Complex), Indianapolis (Indianapolis Motor Speedway), Las Vegas (Primrose at Park MGM), and New York City (Red Rooster). Mike Meehan, SVP, sports operations, NBC Sports, is overseeing these feeds, which will be managed out of the NBC Sports broadcast center in Stamford, CT. 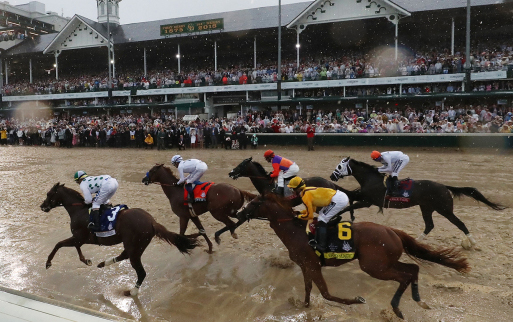 NBC Sports Group will once again battle the elements at the Derby with Saturday’s forecast calling for rain.

“This event is so much bigger than just the 150,000 celebrating here at Churchill Downs,” says Hyland. “All around the country, there are Kentucky Derby parties taking place, and we thought, this year, we should welcome in some of those parties and check in on them. [We want to] showcase that this day is so much bigger than just here at Churchill Downs. It is a nationwide party. We’re going to welcome in those inbound feeds.”

As has seemingly become an annual tradition, rain is again in the forecast for Derby Day. Although damp conditions are likely to make operations more difficult in Louisville, Dekime and his team are thoroughly battle-tested at this point.

“We’ve had really bad luck the past few years with Triple Crown races. We’ve had rain, we’ve had fog, pretty much everything you could possibly think of,” he says. “It makes logistics much more difficult, but we have enough cameras to cover no matter what happens. And, even with the weather challenges, we’ve been able to pull off some pretty flawless broadcasts.”