Fishing League Worldwide (FLW) has special live-streaming challenges that other sports organizations don’t have to deal with. For one thing, its competitors aren’t all on one field. Instead, they’re scattered across large lakes, often miles apart, and nowhere near a Wi-Fi network. Capturing all the action and streaming it to viewers around the world live takes a lot of planning. 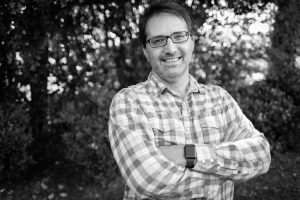 Digital P Media’s Peyote Perryman: “Even though the audience is finding us on a streaming platform, we’re trying to give it to them like they came to us from a broadcast network.”

For those new to the sector, yes, sport fishing is live-streamed online. FLW has been around since 1996 and hosts more than 200 tournaments each year in the U.S., as well as sanctioned international events. Once primarily a U.S. sport, bass fishing now has followers in South Africa, Canada, Mexico, Italy, China, Korea, Zimbabwe, Namibia, and more. The league’s events run for two days, with a starting field of 160 anglers competing to land the five largest bass each day. Champions move on to compete in August for the FLW Cup and a $300,000 prize.

To stream the action, FLW hires Raleigh, NC-based Digital P Media. Led by President Peyote Perryman, Digital P started working with FLW in 1996. It filmed two-day events, brought the footage back to its office, and created one-hour shows for NBC. In this streaming age, though, fans want to see events live as they happen, so Digital P had to create a workflow that could handle it, offering six-hour live streams for each day of a two-day event. 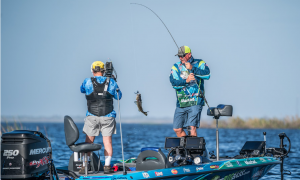 A camera and operator are embedded in the boats of top-five competitors to capture the action live in the FLW competition.

Perryman’s first challenge is positioning the cameras. Digital P embeds camera operators with the top five competitors, not with every boat. But every boat does get an iPad connected to a Zixi server. A marshal onboard operates it, sending dispatches when the competitors land a fish. If there’s action, Perryman sends his drone over, which could take a half hour. Digital P has been using drones since 2015, and the newest models are quieter, able to get as close as 35 ft. off the bow.

Zixi aggregates all the event’s live feeds — from the five main cameras, as well as the iPads in every boat, the drone, and a lakeside camera used for live interviews — and relays them to FLW’s studio in Benton, KY. Two NewTek Connect Pros translate the streams into an NDI signal. Two NewTek 3Play systems pull from the Connect Pros.

A technical director mans the switch and handles the incoming feeds, while Perryman leads the production team by calling cameras. Besides offering full-screen views, he can create split-screen views to juxtapose top competitors or even put four views on screen at once (there’s not always a lot happening during a six-hour live stream). 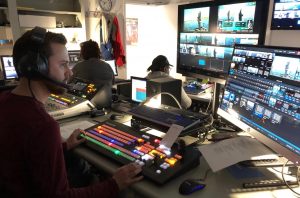 Live feeds from FLW competition are relayed to Digital P Media facilities in Kentucky for translation and distribution.

As the production team creates the live feed, a play-by-play analyst and a color commentator in the studio describe the action for the fans. On-screen graphics are added with LiveGraphics and LiveText in a TriCaster.

Once the show is fully produced, the TriCaster outputs to a vMix unit, which creates feeds for the various platforms. The stream on FLW’s site has commercials, but YouTube and Facebook don’t allow them, so Digital P needs multiple outputs. During commercial breaks, YouTube and Facebook viewers see a sponsored view of one of the tournament’s leaders. The vMix streams the FLW’s feed through a cloud-based Wowza server but streams to Facebook and YouTube directly. The live feed has a total latency of only around seven seconds and a max resolution of 720p.

“We’re really giving viewers a true broadcast experience as a live stream. That’s kind of our mantra,” Perryman says. “Even though the audience is finding us on a streaming platform, we’re trying to give it to them like they came to us from a broadcast network.”