Last week, NASCAR announced that all three national series will return to single-car qualifying at all oval tracks after five-plus years of using a group qualifying format. Although NASCAR’s decision to shift formats was based on a number of factors, one of the primary enablers was the success of SMT’s GhostCar/Broadcast Analytics technology during Fox Sports and NBC Sports telecasts. 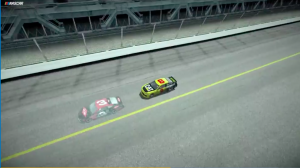 “One of the other things to make a compelling program out of [qualifying] is, we’ve seen the use of the ghost car [on television]. That’s going to be a big element in presenting a quality show,” Scott Miller, senior VP, competition, NASCAR, said in an interview with NASCAR.com. “I think fans are going to be able to see which drivers drive in deep, which drivers roll the middle faster, and get off the corners faster and really give the talent in the booth something to talk about.”

Miller added that this was a unified decision between broadcasters, teams, and NASCAR after qualifying-gamesmanship issues plagued the Monster Energy NASCAR Cup Series throughout this season. The changes went into effect for last weekend’s NASCAR tripleheader at Dover International Speedway, and the GhostCar technology was featured in Fox Sports’ qualifying coverage. The group qualifying format, which was introduced before the 2014 season, will remain for the series’ three road-course events. 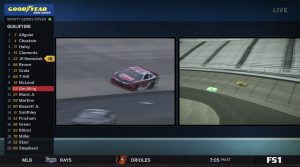 The GhostCar made its first appearance during NASCAR Xfinity qualifying last week.

SMT’s GhostCar/Broadcast Analytics tool debuted during the 2018 NASCAR season as a part of the NBC broadcast package and was used as a direct-to-tape execution mostly during qualifying. Just a year later, GhostCar now fuels live visualizations in both NBC and Fox broadcasts. Now NASCAR and its broadcast partners believe the use of this technology will enhance the on-air product for fans during qualifying — as it did during Fox’s Daytona 500 single-car qualifying coverage in February.

“Historically, single-car qualifying had a stigma of being boring to watch,” says AJ Mead, digital product manager, SMT. “This past February, for Daytona 500 single-car qualifying, SMT and Fox debuted GhostCar. The combination of the broadcast video with our live virtual visualization and leaderboard data created a compelling feel. Viewers were able to see in real time how the driver was racing vs. the bubble or pole sitter and visually see where they were gaining or losing.”

How It Works: Inside SMT’s GhostCar Technology
The GhostCar application is powered by a combination of sources. The application visualizes SMT’s RACEf/x tracking-system data — a combination of GPS location data, NASCAR Timing and Scoring data, and car ECU (engine control unit) data — in a 3D virtual environment. The virtual playback is both live and archived for on-demand viewing. SMT has built 3D virtual track and car models using SMT survey data for precision structural and geographic accuracy. 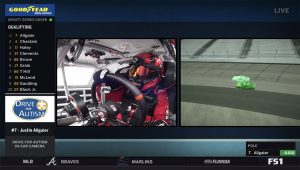 “In 2018, GhostCar was primarily used to visualize one driver’s qualifying lap vs. another’s. While that is a compelling execution, it was only scratching the surface of the tool’s capabilities,” says Mead. “This season, Fox and SMT have used GhostCar to visualize more scenarios, including a car’s performance on old tires vs. new tires and team performance on green-flag pit stops. These additional visualizations are a great tool for the talent to effectively communicate with the audience.”

Shift to Single-Car Qualifying Opens the Door for GhostCar Tech
Given the frenetic pace of group qualifying, using GhostCar live was not an option. However, with the transition to a single-car format, SMT’s technology will allow the story of qualifying to be told in an entirely new way. 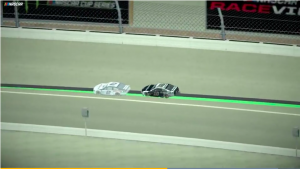 When cars hit the track for a live session, the GhostCar application ingests the RACEf/x tracking data, and, through the easy-to-navigate user interface, a producer can cue up any lap from any driver and compare performance vs. any car in the field. The virtual environment allows a producer to place virtual cameras anywhere in the scene to capture compelling vantage points not seen through typical broadcast cameras. The producer has extensive control to customize various scenarios through an extensive feature set.

“What I am excited to see is the GhostCar visualization during single-car qualifying at shorter tracks,” says Mead. “Previously at the super speedways, drivers are full throttle, and there isn’t much difference in driving lines. At the shorter tracks, viewers will be able to see the differences in brake and throttle traces, and I expect driving lines to be a bit different. These are all added storylines and talking points for the talent, which should ultimately make for a more compelling television show.”

“[This application] fits SMT’s tagline perfectly: Changing the Game,” says Mead. “It is extremely rewarding. The digital and motorsports team at SMT has put in a lot of hard work and effort to make sure GhostCar was a success. To know it played a small role in NASCAR’s decision to transition back to single-car qualifying is exciting. It also challenges us to continue to innovate, which — and I think I speak for everyone at SMT — is a welcome challenge.”