What a difference a year makes. Networked audio (aka AoIP) had been slowly working its way into the infrastructure of broadcast audio for several years. Broadcasters were looking for ways to assure a consistent and reliable experience with the new format, and their innately cautious nature translated into measured progress.

In the meantime, AoIP made rapid progress in pro-audio applications everywhere else, from music production to postproduction and live sound. In those markets, the costs and intricacies of implementation have been relatively low, as has the risk of moving into them deeply and quickly.

But broadcast’s historically slower pace of adoption has increased in the past year, thanks to the finalization of the SMPTE ST 2110 Professional Media Over Managed IP Networks standards suite. Also, standard AES67, which was initially released in 2013, bolstered device intercompatibility; and the cost of entry to networked audio has continued to decline, following digital’s Moore’s law paradigm.

“ST 2110 combined with AES67 has now given broadcasters what they needed to feel comfortable moving into AoIP, and, between this last NAB Show and the one before, AoIP has really taken off in the broadcast sector,” says Ted White, global marketing manager, RedNet networked-audio interfaces, Focusrite Pro. “In the last 18 months, that combination has given them the standards and the assurance of compatibility they need to feel comfortable about it. There are also a lot more manufacturers incorporating AoIP in their products, which also helps broadcasters feel that it’s here to stay. With immersive sound, channel counts will only increase, as will the amount of audio that needs to be ingested. AoIP is the perfect solution for that.”

White further notes that Focusrite Pro is a proponent of the AES70 standard, also known as Open Control Architecture (OCA), which defines a scalable control-protocol architecture for professional media networks. “We feel the ability to control and monitor devices from multiple manufacturers on a network will be important to the broadcast community.” 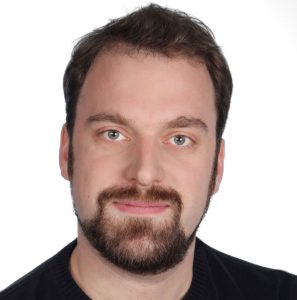 Not everyone sees a perfect picture yet. Stephan Türkay, senior product manager, networked audio, Lawo, looks to the IT and telco industries for parallels to IP’s impact on broadcasting. From that perspective, he says broadcast audio seems still enmeshed in the relatively closed ecosystem it has existed in since networking began to infiltrate the industry, with proprietary solutions operating alongside (though not necessarily in harmony with) increasingly open standards and protocols.

“The industry is still trying to figure out what level of interoperability it actually wants to have,” he says, citing Lawo’s Ember+ control protocol, available as open-source code, as an indication of the company’s desire to see broader interoperability standards implemented. “In the IT industry, you never needed a Dell printer and Dell switch to work with a Dell computer, and that’s how broadcast audio should work as well.” Achieving that, he adds, will depend on broad market agreement on open standards.

Uneven Uptake
Josh Rush, SVP, marketing, Audinate
, developer of Dante networking protocol, believes that broadcast began evincing practical interest in networking more than two years ago, propelled by both Dante and AES67. However, he acknowledges that broadcasters have been implementing it on an uneven basis: a studio here, a truck there. Dante sought to address that last year with the introduction of AVIO endpoint adapters, which enable connection of legacy analog and digital audio equipment to Dante networks via bidirectional AES3/EBU interfaces.

Other networking ecosystems — Calrec’s Hydra2 system in particular — have also been gaining traction. It’s not unusual today to see multiple AoIP systems deployed simultaneously: for instance, Hydra was used to move microphone signals around the sprawling downtown-Nashville campus of the recent NFL Draft event, even as Dante was used to transport communications audio, such as intercom. Rush sees that as evidence that AoIP is becoming the norm for remote-broadcast operations.

“Dante shines when you need a system that comprises multiple manufacturers’ products,” he says. “But AES67 and ST 2110 interoperability, both of which Dante incorporates, means you can pick the parts of a system you want and they’ll talk to each other.”

Dante is entering the sports landscape as much on the live-sound side as through broadcast, Rush notes. For instance, the Minnesota Twins’ Target Field this season uses Dante to connect remote locations throughout the venue to its control room.

Intercoms on the Rise

Two product categories have led AoIP adoption for broadcast: consoles and intercoms. With consoles, it’s largely thanks to manufacturers’ development of either proprietary or closely associated network formats, such as Hydra and Ravenna, the latter developed by ALC NetworX in association with Lawo.

“Odin completes and broadens our IP portfolio,” says Guy Low, content and creative manager, Bosch, parent of RTS. “With the use of two OMI-64 cards, 64 ports each, it has up to 128 channels of digital audio over IP in the OMNEO format and is fully compatible with Dante and AES67.”

The Future Is NMOS
Though comprehensive, the combination of AES67 and ST 2110 still lacks two key ingredients in IP management: discovery and control.

“With discovery not defined under AES67, it’s not always easy to get a device to receive another manufacturer’s AES67 stream,” explains Calrec Product Manager Pete Walker.

Establishing connections between AES67 devices involves engineers’ accessing web applications served by each device to configure audio transmitters and register them to receive streams from other devices, often copying and pasting stream data between applications, a process Walker describes as “clunky.”

The solution appears to be the Networked Open Media Specifications (NMOS), a set of protocols developed by the Advanced Media Workflow Association (AMWA), a trade/technical organization that isn’t a standards body but works in conjunction with such organizations. In the broadcast world, NMOS is highly anticipated, expected to standardize and enhance discovery and connection management and covering video as well as audio in a uniform way. The first stage of its rollout, IS-04, is device discovery, along with some basic connection management. NMOS allows IP media connections across a network to be managed from a central server, reducing reliance on individual web applications served from each device. Its successor, IS-05, will provide an even richer set of features.

An early example is Calrec’s Connect application, introduced last year for the company’s series of native-AoIP products, such as its new Type R radio system and ImPulse Cores, applies discovery capabilities to audio by identifying media streams and devices on a network regardless of their registration/discovery protocol, whether it’s NMOS, mDNS, AES70, or SAP. It displays this information, accessible via a browser, in a visual and user-friendly way that facilitates interconnectivity and eliminates the need for detailed networking knowledge on the part of audio engineers.

Given the previous major inflection points in pro audio, starting with the transition from analog to digital, the onset of AoIP has been remarkably swift, with the standards and best practices around it arriving in rapid succession. Where AoIP goes next is pretty much everywhere, most broadcast-audio professionals agree. “Three to five years from now,” Rush predicts, “networked audio is all anyone will know.”