Conservatory of Recording Arts & Sciences (CRAS) students continue to have opportunities to learn from the very best audio engineers and producers in the industry while on-site in real time. They also get to train on new industry technologies even some professionals haven’t had the chance to work with yet. Most recently, CRAS students had the privilege to practice mixing live audio and video feeds from Fox Sports Arizona in the school’s Dolby Atmos-equipped 42-ft. remote-production mobile broadcast trailer during a recent Phoenix Suns NBA home game versus the Memphis Grizzlies at Talking Stick Resort Arena in Phoenix, Ariz. 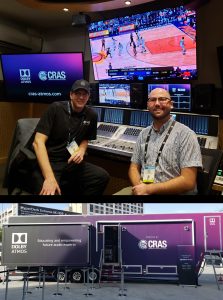 CRAS also recently brought its 42-ft. remote-production mobile broadcast trailer to the 2019 NAB Show in Las Vegas, Nev. in conjunction with Dolby Laboratories. It was stationed outside the Las Vegas Convention Center’s South Hall throughout the broadcast industry convention where attendees had the opportunity to tour the MBU and speak with CRAS and Dolby representatives.

“At Dolby, we are passionate about empowering and training the next generation of creatives,” said Glenn Kiser, Sr. Director, Dolby Institute and Corporate Experiences, Dolby Laboratories. “Through our partnership with CRAS, we are providing students hands-on experience that will prepare them for a career in audio mixing.”

Dolby and CRAS have also set up free online education courses covering the basics of how to use Dolby Atmos and mixing for live TV.

Robert Brock, CRAS Director of Education, lead the CRAS team for both the Suns game and NAB Show demos and educational trainings. “Learning hands-on during a live professional sporting event such as NBA game is the chance of a lifetime for the next crop of professional audio engineers,” said Brock. “The complexity, speed, and accuracy required for such a live broadcast was an eye opener for them. Dan Siekmann, Phoenix Suns V.P. of Broadcasting, was our initial point of contact and we are very grateful for his help in allowing our stu-dents this tremendous opportunity.”

Brock added, “Dolby’s involvement in our Suns outing was truly special on so many levels. Our students were able to work hands-on with a live Dolby Atmos broadcast while also gaining valuable knowledge from Dolby that left them feeling inspired to start a career in live broadcast production.”

Brock explained that A2 Dennis Lamb took students out on the court to see the net, court, and announcer mic setup pre-game, and for a tour of the pre/post game set. For pregame, game time, and postgame production, students received the raw audio and video feeds from Mobile TV Group’s 33HDX truck, including all the behind-the-scenes audio discussions and directions between the directors, broadcast crews, producers, engineers, and videographers.

“MTVG EIC (Engineer In Charge) Karl Braunwarth’s setup gave us ten camera feeds,” Brock continued. “Bob Pachman was the A1 who set up our audio feeds giving us about 60 channels of audio on a MADI line. This provided students the opportunity to simulate mixing their own version of the show without the pressure of being live. Bob had all of the students rotate into the FOX audio control room to watch as he mixed the live show.”

“With all the background streaming in simultaneously, our students had the opportunity to experience what a broadcast is really like and to practice mixing the audio and follow directions amidst the chaos of a live broadcast,” said Kirt Hamm, CRAS administrator. “This opportunity was devised in an effort to boost potential careers in broadcast audio in a real-world setting.”

CRAS structured programs and highly qualified teaching staff provide a professional and supportive atmosphere, which is complemented by its small class sizes allowing for individual instruction and assistance for students in engineering audio recordings. CRAS has been providing quality vocational training in audio recording for more than three decades. The curriculum and equipment