For MEDIAPRO, the ten simultaneous matchups taking place in the penultimate round of LaLiga has required logistic coverage and meant a technical challenge that is considerably greater than that of a round where games are played throughout the weekend. To face this challenge, MEDIAPRO turned to the work of 1,000 professionals and the simultaneous deployment of ten mobile units, backed by technical support from Overon, at the different fields in order to broadcast all the signals and carry out all of the production at the same time. 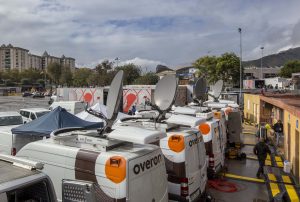 Furthermore, the uniform timetable, established to protect the results of teams in the middle of a battle to remain on top, with dropping a division or participating in European competitions at stake, has required a technical effort from MEDIAPRO, in charge of production and distribution of each of the matchups, which was focused on activating 20 complementary signals and 8 additional channels to deliver the signals at the same time to customers both in Spain and around the globe.

The Barcelona production center also took on 30 additional commentators in both English and Spanish and double the number of graphics stations required for a normal round. The multifutból signal, distributed to all national and international customers as well as public venues, switched between the signals received from each of the different stadiums, delivering a single signal with commentary in English and Spanish, featuring the best images from each matchup in order to follow the highlights of the round without having to change the channel.

The unified timetable also meant a technological challenge with regard to VAR, developed by MEDIAPRO, which has implemented all of the necessary additional resources in order for the round to run smoothly, without any setbacks, to the satisfaction of the institutions.

MEDIAPRO has once more successfully overcome a technical challenge, in this case that demanded by a round with a uniform timetable, proving themselves to be a reference in the audiovisual production of sporting events at the international level, also participating in the production of 16 national football competitions around the world, including top-league competitions, in Spain, France, Portugal, Italy, Greece, Turkey, Kenya, Angola, Slovenia, Serbia, Colombia, Bolivia and Mexico. The MEDIAPRO Group’s teams also produce events for the UEFA Champions League, FIFA Confederations Cup, FIBA, EuroLeague, FIFA World Cup, The Arab Games, Africa Cup of Nations, and Formula 1.