Inside Full Sail University’s ‘The Fortress’ — the Largest College Esports Arena in the U.S.

One year after launching its own collegiate esports team, Full Sail University is kicking its esports-production efforts into high gear with the launch of a $6 million, 11,200-sq.-ft. esports arena next week. Dubbed “The Fortress,” the new facility is the largest gaming arena on a U.S. college campus and can seat up to 500 fans. It not only will serve as home to Armada, Full Sail’s collegiate esports team, but will also be used for a variety of third-party gaming events, collegiate tournaments, live-streamed esports competitions, and live concerts. 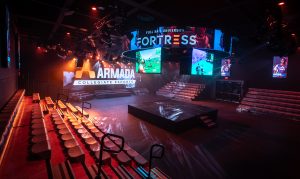 “Full Sail has a unique ecosystem, in which students are intimately involved in our live productions. In addition, gaming is very much a part of our culture here through our game-design and -development [programs],” says Vince Lepore, director, event technical operations, Full Sail University. “I think Full Sail is uniquely positioned to be a leader in esports. We are already a leader in a lot of the elements that go into esports production, so it just seemed like a natural fit for us.”

All About Flexibility: From 1v1 to MOBA to Battle Royale

Full Sail began designing the facility — which is located in a converted soundstage at its Winter Park, FL, campus — more than a year ago and has worked closely with Orlando-based systems integrator Pro Sound and Video on the project. One of the key factors in its design was Full Sail’s desire to have an ultra-flexible space that could accommodate a variety of esports formats, from 1v1 competitions to 5v5 and 6v6 MOBA (multiplayer online battle arena) games to battle royale setups featuring as many as 100 players.

“Flexibility was really important to us,” Lepore explains. “We put a lot of effort into designing the room so that we could do a traditional end-stage configuration, as well as an in-the-round configuration. What we didn’t want to have to do was rehang the speakers, the lighting rigs, the LED walls and everything; we wanted to be able to just flip between the two configurations in a reasonable amount of time. That was one of the big elements of our design criteria and drove a lot of the technology decisions.”

Inside the Control Room: Powering the Fortress

The control room, which is located on the second floor adjacent to the main arena, is heavy on Ross Video gear, including a 3M/E Carbonite Black switcher (36 in, 22 out), Ultrix router (112 in, 112 out), Ross Xpression graphics, and a variety of OpenGear terminal equipment. Other key pieces include a 12-channel EVS XS3 replay server, a monitor wall composed of six Sony 43-in. displays, and a G&D KVM system. 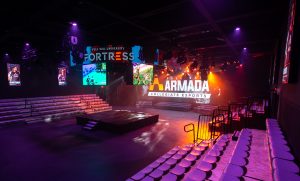 The arena will serve as home to Full Sail’s Armada collegiate esports team, as well as to other third-party gaming events.

The Fortress doesn’t currently house a separate observer room to produce in-game action (“observers” are essentially the in-game camera operators); instead, the main control room will handle the entire production. However, Full Sail is exploring the possibility of adding an observer room in the future.

“We don’t have a separate observer space right now, but we are looking at a couple of adjacent classrooms and adding some connectivity in there,” says Lepore. “Those may end up being used as an observer space, or they may double as practice rooms or green rooms for competitors. We have some adjacent spaces that we are already eyeballing as part of a potential phase-two [project].”

Inside the Arena: A Professional-Level Esports Experience
The Fortress features a variety of Absen 2.9-mm LED walls, including a 36- x 11.5-in. upstage LED wall (dubbed the “Main Tron”) and, in the center of the arena, a halo-shaped LED display (“Ring Tron”) measuring 24 ft. in diameter. The competition area also features four center LED walls hanging inside the Ring Tron and six LED banner displays. The LED displays are driven by a trio of Green Hippo Karst+ Hippotizer media servers. 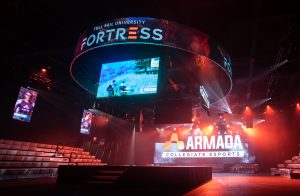 A halo-shaped LED display — dubbed the “Ring Tron” — in the center of the arena measures 24 ft. in diameter.

“The challenge was to create [a facility] that would allow us to have an in-the-round or end-stage configuration. So we have the Ring Tron as the visual centerpiece for the room for in-the-round and the Main Tron for an end-stage setup,” says Lepore. “The four smaller LED walls that hang inside of the Ring Tron are all on trusses and motors, so we can place them in different areas of the room very easily. The whole [arena] is quite flexible, so it gives us a lot of options as to how we configure the space.”

Lepore and company also have flexibility when it comes to the location of the caster desk. Full Sail already has an esports caster desk, which can be located on a riser inside The Fortress or can be positioned inside one of the many large soundstages immediately adjacent to the arena.

“We’ve got some flexibility with the caster desk, and it’s going to be an interesting element for us,” says Lepore. “Some people want to be inside the arena, and we have the capability to do that. Or we also have a news-desk setup in one of the nearby soundstages that could be used for casters as well. We have that flexibility because of the nature of our campus and the fact that we have several soundstages.” 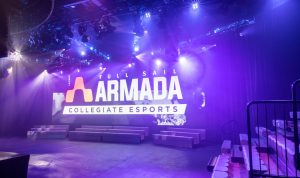 Full Sail has deployed four Sony HXC-FB80 cameras (typically running in 1080p), including a jib, along with Sony HXCU-FB80 CCUs and RCP-1500 remote-control panels to cover the arena. The facility is wired for an additional four cameras depending on the needs of the show. Up to a dozen Marshall POV cameras will be added later this year to cover players during MOBA competitions.

The Fortress is also equipped with all LED lighting, including 56 ARRI L7 LED Fresnels.

In addition to the arena, Full Sail has created a separate dedicated practice space for Armada at a different campus location equipped with the latest in gaming technology.

Looking Ahead: A Bit of Magic and Live Streaming to the Masses
Although the university’s $6 million commitment marks its largest esports-related investment to date, Full Sail is by no means a stranger to live esports events. It has hosted a number of events in the past, including the 2013 MLG Fall Invitational in 2013, 2014 MLG Call of Duty U.S. Championship, and Madden NFL 15 Ultimate Team Championship in 2014.

The Fortress features a lounge outside the main arena.

Earlier this month, Full Sail also announced a deal to become the exclusive university partner of Magic Gaming, a first-of-its-kind partnership in the NBA 2K League. The multiyear partnership will feature prominent in-game exposure on Magic Gaming’s home court, as well as opportunities for collaborative digital content to be displayed at both Magic Gaming’s practice studio and The Fortress. The two will also bring additional esports events to the greater Orlando community.

In addition to the in-arena experience, Full Sail plans to regularly stream esports events from The Fortress on Twitch in the coming months.

“We put a lot of energy into both the [in-venue] experience [and] the experience streaming out on the internet. We do have plans to stream as many events as possible,” say Lepore. “We are currently using the campus internet connectivity to do that, but we’ve got some plans to hopefully bring fiber for video services directly into the facility. Right now, we’re just excited to get everything up and running, and we’ve had an amazing response from students and outside people alike.”

Full Sail University will officially open The Fortress during a ribbon-cutting ceremony on May 21.