The Columbia-Princeton college baseball contest featured a single-camera shot on a 12-ft. perch

At the beginning of the 20th century, the concept of televised sporting events was a far-fetched dream. Then, NBC’s experimental station, W2XBS, came into play and turned the industry upside down. Eighty years ago today, NBC Sports is celebrating a feat that altered the media landscape that dates back to 1939: the first televised sporting event in U.S. history. The college baseball matchup included two Ivy League rivals, the Princeton University Tigers and the Columbia University Lions, as the latter hosted the former in the second game of a doubleheader at Baker Field in New York City. 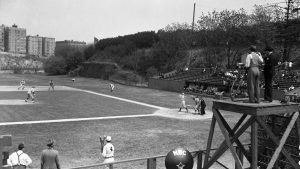 The single-camera operator was stationary above the third base line.

The equipment used during the game included a single camera operator atop a 12-foot wooden stand down the third-base line. Bill Stern, a member of the American Sportscasters Association Hall of Fame, was the voice of the ballgame that ended in a 2-1 Princeton victory in 10 innings.

The booth wasn’t the only location that housed sports royalty, as future Chicago Bears Hall of Fame gunslinger Sid Luckman started as the Columbia shortstop 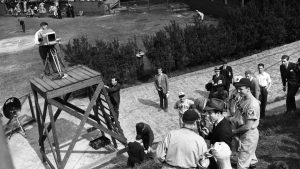 Princeton was victorious after a 10-inning affair.

This seismic event encouraged NBC to expand its television coverage of sporting events. In the same year, on August 26, NBC aired its first-ever Major League Baseball telecast between the Brooklyn Dodgers and Cincinnati Reds at Ebbets Field. The inaugural MLB broadcast incorporated two cameras and featured Red Barber as the game announcer.

Continuing their momentum, the network produced the first televised football game as well between Pennsylvania’s Waynesburg University and the local Rams of Fordham University in the Big Apple one month later. Similar to the history-making baseball game, Stern was also on the call for this gridiron contest.