The Kent State School of Journalism & Mass Communication program features a studio, home to 17 student-run shows and classroom curriculum. Students within the program gain first-hand experience in all aspects of single camera and live multi-camera production — including shooting, audio recording, editing, writing, directing, and producing live television. But live remotes proved to be a bit trickier – the solution was a bit clunky and didn’t allow for the flexibility to go live beyond this campus. 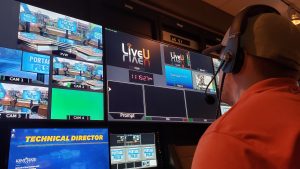 The live system featured a capture card and Skype. The students would Skype back to the control room and use a scan converter to get the signal into the studio’s infrastructure.

“It was too difficult to pull off live video outside the studio. Providing a quick news hit was virtually impossible,” noted Daniel LeBeau, Broadcast Engineer, Kent State University.

“We wanted to give our students a more realistic experience. Reporters needed to master the skills to report live and producers needed to learn how to coordinate live shots,” he added.

The tipping point was when the department’s live reports from a Hillary Clinton campus stop during the 2016 Election were basically unusable due to audio delays and image pixelation.

“From a technical perspective, the technology allowed us to increase our number of live shots exponentially. From an educational perspective, it probed some weak spots in our students’ education. It gave them a little bit of time to work through the differences in reporting live,” said LeBeau. “The stories quickly got stronger and incorporated studio elements. It became clear that by exposing students to real live reporting, we were finding our weaknesses and turning them into strengths. This will give our students a significant advantage when it comes to entering the job market. They can explain and show their experience with live reporting. Not ‘fake live.’ Real live.”

And real live has helped students find jobs right after graduating from Kent State, which is top of mind for anyone attending higher education.

“The biggest thing at Kent State is getting real-world experience and LiveU is as real as it gets. It’s something you can put on your resume that says ‘I learned this in college. I already know how to do it. You don’t have to spend time training me.’ It makes you as a potential employee a lot more valuable,” said Ryan Dunn, a recent Kent State University Graduate and Technical Producer, at Local Las Vegas Fox Affiliate, KVVU.

LiveU is used for news stories, sporting events, and weather reports. The students have followed the men’s basketball team to California for the NCAA tournament. When bones were found buried on campus, TV2 teams were on scene immediately alongside their professional colleagues from every news station.

After two years with the technology, the department is pushing the envelope with their use of LiveU by implementing more talkback between the studio and the field reporters. “Our students are worrying about timing, IFB, and lower latency. We’re definitely strengthening live field reporting and control room capabilities,” noted LeBeau.

“We’re quickly getting students trained and comfortable with LiveU. They have four years to create their demo reel,” concluded LeBeau.