Live From the Indy 500: BSI Puts Fans in the Driver’s Seat, on the Hood

A majority of the field will be loaded with POV cams

For an event like the Indianapolis 500, there can never be enough access into the cockpit of an IndyCar. With that wish comes the reply by BSI. The engineers are on hand at Indianapolis Motor Speedway, installing 14 on-board cameras to put the at-home viewer behind the wheel and on the track at the most intense race in sports. 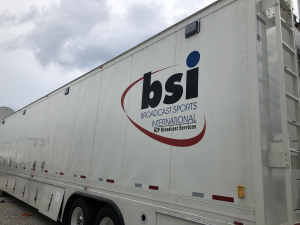 BSI took a stake in the TV compound along with IMS Productions and NBC Sports.

“This is the highlight of the season for us. Everyone takes really great pride in this event,” says Douglas Parr, engineer-in-charge, INDYCAR Series, BSI. “It’s really important to us personally, aside from what it represents for [NBC].”

A handful of drivers will virtually have a co-pilot during the biggest race of the season. Through a tedious selection process, 14 drivers were selected out of the field of 33. Among them are No. 2 Josef Newgarden, No. 5 James Hinchcliffe, No. 9 Scott Dixon, No. 10 Felix Rosenqvist, No. 19 Santina Ferrucci, No. 26 Zach Veach, No. 27 Alexander Rossi, No. 28 Ryan Hunter-Reay, No. 60 Jack Harvey, and No. 98 Marco Andretti (who is racing on the 50th anniversary of his grandfather Mario Andretti’s win in 1969). And No. 15 Graham Rahal will have something a little extra.

“One of the drivers, Graham Rahal, will carry a visor camera,” Parr notes. “He’s the only one that’s going to wear one this year.”

Adapting to the Challenges: Car Models To Crowd Congestion

BSI is accustomed to working with NBC Sports. At the same location for the NASCAR Brickyard 400, the company is known for implementing engaging vantage points of drivers inside fast-moving vehicles. Although it may seem like the same practice on paper, speed and size create logistical issues.

“The biggest difference between the Brickyard [400] and the Indy 500 is the [architectural] layout of the cars,” Parr explains. “On an IndyCar, you have very limited areas where antennas can go; [on] stock cars, you have a lot more places to work with. Another thing is the speeds that [these drivers] are running: they will reach speeds of around 235 mph through the turns.”

BSI isn’t stopping at on-board cameras. It’s going into the crowds with RF services as well. Besides the car size and speed issues, predicted crowd levels can be a huge obstacle to signal clarity.

“We’re doing all of the [six] wireless handhelds and 17 wireless microphones. [We have] 10 PLs and 20 IFBs, so there’s a lot of RF going on,” Parr says, adding, “When you’re setting everything up and testing signals, you can’t duplicate 310,000 people in the stands and how that affects the way that signals are bouncing off.”

Heading to the Pits: Tinkering, Upgrading for the Next Year’s Race

AS BSI has become a staple in the motorsport community for its intriguing placement of POVs, there is always room for improving the product for the following year’s contest.

“A ground-base receive system for the car is very much like a race car,” Parr explains. “We have all kinds of attenuation adjustments, antenna adjustments, different types of antennas [to choose from], so we go through this whole process of trying to set it up [for] what’s going on that year. We always start off with a baseline with what we used last year. [Based on the race in 2018], it’s changed for this year. Every year, you just have to adjust for conditions.”