IMS is providing cameras, transmission, mobile units at The Brickyard

Once a year, the city of Indianapolis becomes the epicenter of the racing universe. As thousands of fans flock to the hallowed grounds of Indianapolis Motor Speedway for the annual pilgrimage, IMS Productions (IMSP) gears up for one of the most historic and important events of the year: the Indianapolis 500. For this year’s edition, the company will assist NBC Sports in its first year as lead broadcaster, providing start-to-finish services that uphold the 103-year-old tradition of the prestigious race. 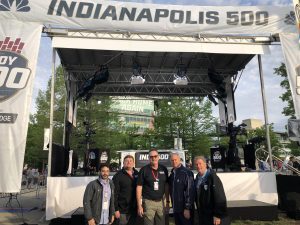 “For a small company in the middle of Indiana by Indianapolis Motor Speedway, this day is tremendous since we’re [facilitating] the main race,” says Kevin Sublette, president, IMS Productions. “This race is our Super Bowl.”

Having covered NASCAR’s running of the Brickyard 400, NBC Sports is no stranger to Indianapolis Motor Speedway. Although the broadcaster is dealing with a different beast in the IndyCar circuit, IMS Productions has leveraged its previous experiences with NBC and its five-decade-long partnership with ABC to ensure a smooth transition.

“The planning has been the same,” says Sublette. “[Supervising Engineer Steve Sontag] has worked on it for over a year, since he was the architect that did the first two weeks for ABC for the last few years. He understands what [NBC] is looking for. He had bimonthly meetings on the phone with all the engineers-in-charge to make sure that we have everything checked off the list. It’s a massive show, but we’ve been planning it for over a year, and, for the most part, we have the roadmap.”

The main twist that NBC provides is an additional pre-race studio show nearly four hours long. To support a good chunk of NBC Sports’ 200 staffers and an entire show’s worth of equipment, IMS Productions called on its new HD-6 mobile unit to take care of all pre/postproduction operations.

“In years past, ABC has always done the pre- and post-race [production] out of their main [NEP ND7] truck,” says Sublette. “That’s been something we tweaked and made sure everything is the way that everybody wanted it. It has been a huge learning [experience] that we’ll sit down afterward and make sure we did correctly and see what we can change for next year. It’s massive from what we’ve done in the past.”

Down in the TV Compound: Supervision by Sontag

The HD-6 is not the only mobile unit available in the expansive TV compound outside the skeleton of Indianapolis Motor Speedway. An additional four mobile units are also joining the party, including HD-3 and HD-5 for race-day coverage, B-1 for audio submixing, and C-1 for tape release. In terms of technology, IMS Productions is supplying a whopping 56 out of the 80 total cameras being used: 40 from Sony, nine from Panasonic, four from Fletcher, and three from Toshiba. For connectivity, the team laid down 200,000 ft. of fiber. With all this equipment, Sontag needed to develop a way to spread his tech fleet evenly. 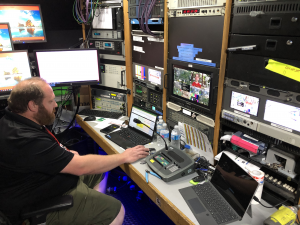 Kevin Husband developed a network of five redundancies in his transmission plan.

“Coming to The Brickyard is probably one of [NBC’s] biggest shows,” he says. “The television broadcast is a part of what we do. We support the big-screen production and the international broadcast. We don’t usually roll with three A units, so figuring out how to work those into the plan and how we were going to distribute camera control and other extra resources needed to be worked out.”

For Sontag, it is the personification of working in live event production: “The biggest challenge is that the plan has continued to evolve. On Saturday morning at 10:30 a.m., it was still evolving.”

Inside IMS Productions’ TX-4 truck, Director of Satellite Communications Kevin Husband is using that fiber (and other modes of transmission) to bring all the action on the asphalt to the nation and the world in 1080i.

Global fans will tune in live from multiple countries: Australia, Belgium, Canada, France, Germany, Austria, Switzerland, Italy, Brazil, Japan, The Netherlands, New Zealand, Sweden, Denmark, Norway, Finland, Portugal, Russia, Spain, South Africa, Vietnam, Myanmar, and other countries in Asia and Latin America. At an event as huge as this one, there is no margin for error. With that idea in mind, Husband developed a plan with five redundancies to cover all his bases. 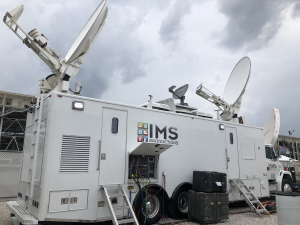 The TX-4 will bring the race to fans across the U.S. and many countries around the globe.

“We started building backups on top of backups,” he explains. “We have a backup of IP going to NBC and then another backup of the program over IP to MX1’s teleport in Hawley, PA. As the ultimate failover, the [feeds] will come back up in the holds. We have all of the wire to the national feeds, which are duplicated across all of the [international] platforms. When you look at the three satellite [monitors], you notice that they aren’t the same. They look the same, but one’s going out and one’s not. We made sure that there’s always a path on there [that is going] somewhere.”

To devise a solution to ensure smoothness and accuracy, Husband and his fellow members of the transmission team prioritized complete control of the process by taking out a cable and installing an extra two racks for encoders, decoders, and three multiviewers.

“For IMSP, it’s enormous,” he says. “We brought it all in-house, and we created the entire platform and the entire program. [With all of this equipment], we have six power sources running to this truck. It has taken about a week and a half of working around the clock to get everything up there correctly. We wanted to make sure [the broadcast] gets [to NBC].”

More Than Just a Race: Giving Assistance to the Fan Festivities
With a great race like the Indianapolis 500, there is a ton of pomp and circumstance surrounding the drafting, near-misses, and collisions on the track. During the weekend, other experiences took place around the track in the run-up to the race, which be followed by the Victory Celebration Monday night at the JW Marriott Indianapolis. 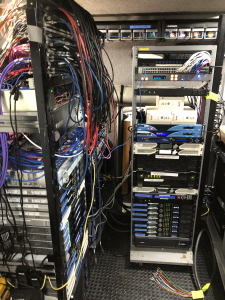 Additional encoders and decoders were installed to give complete control.

“One of our uplink trucks also has a small production facility, so that’s switching three or four cameras for concerts on Carb Day [on Friday], Legends Day [on Saturday], and the Snake Pit on race day,” says Sontag. “We pass [that feed] through to the Pagoda and the big screens. One of our mobile units went downtown for the parade [on Saturday afternoon].”

IMS Productions’ crown-jewel event is the pinnacle of its schedule, but the cornerstone to pulling off quality service is done months before the green flag is waved at Indianapolis Motor Speedway.

“I’ve got a great group of guys around me who’ve really pulled together and got the job done,” says Sontag. “We put in all of the work in January and April to get everything ready to go, so that this can run very smoothly.”

And through the diligent work of Ken Ferguson, operations manager; Colin Wensel, senior director, broadcast operations; Sontag, Husband, and many others, Sublette and the entire crew at IMS Productions have cultivated a winning formula at a racing location that breeds champions.

“When I first got here, we only had two mobile units,” Sublette recalls. “Now, we’re up to five. We didn’t have uplinks, and now we’re also up to five. We’re doing the main race rather than being more in the shadows. We build everything around our trucks so that they could [cater to] racing. While a lot of people bring in additional gear, we own all of that. We do racing all the time because it’s our passion. We’ve been very fortunate because [we’ve been] allowed to do what we need to do to grow the company and be in the position that we are now.”