Live From the Indy 500: NBC Sports Revs Its Engine in Inaugural Coverage

The broadcaster lauds the quality service, synergy, and partnership of IMS Productions

When Memorial Day Weekend rolls around in the U.S., racing fans know what time it is. At the world-renowned Indianapolis Motor Speedway, 33 drivers will rev their engines and embark on a mechanical sprint towards history in the 103rd Indianapolis 500. This weekend also marks a massive milestone for the team at NBC Sports, who take over as the host broadcaster this year, bringing “The Greatest Spectacle in Racing” to homes across America for the very first time. 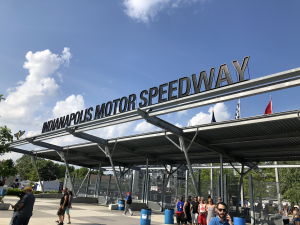 NBC Sports has taken over lead-broadcasting duties from ABC at Indianapolis Motor Speedway.

NBC is deploying an impressive arsenal of live video technology to give this year’s race a truly elite on-air look. Much of it is made possible by working alongside the racetrack’s experienced in-house operations unit, IMS Productions.

“From the engineering and operational side, it has been a success working directly with IMS Productions,” says Ken Goss, SVP, Remote Operations and Production Planning, NBC Sports Group. “They’ve been great partners, and they did a terrific job [with helping us] converge all of our operations here. We’re looking forward to our first Indy 500 and are happy to forge a strong, ongoing partnership with IMS Productions.”

A whopping 80 cameras are scattered across the sprawling 560-acre campus, highlighted by a grouping of five Sony HDC-4300s at 6X super-slow motion. These high-speed cameras will be located on the cars’ right side at Turns 1, 2, 3, and 4.

Out of the 21 specialty cameras being leveraged, BSI and Fletcher are providing fans unique perspectives on the day’s competition. With the help of an extensive line of POV cameras, NBC will have on-board cameras installed on more than a dozen cars.

“We’re excited to have BSI here due to our success with them on [NASCAR broadcasts],” says Goss. “When you have a show of this size, it is better for all involved.”

Outside the track, a combination of six HDC-3500 and HDC-2400 handheld and HDC-P1 robotic cameras with RF wireless capabilities will allow reporters to conduct hits from famous areas like Gasoline Alley. Down the final stretch near the start/finish line Inertia Unlimited cameras will capture high-speed footage of any close calls near the conclusion of the race. 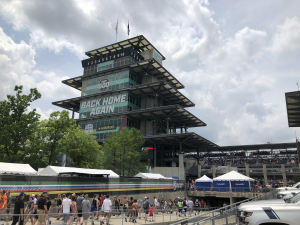 A 180-degree fisheye cam will give views from the Pagoda.

NBC Sports will provide picturesque and stunning views not only from ground level but also from high above. NBC is deploying cameras on a blimp and helicopter to provide aerial views of the track and an 85-ft. Strada camera system will also take to the skies with looks from inside the concerts in the Snake Pit. Lastly, a Technocrane will also be on hand.

All these cameras will be fitted with lenses that include 20X, 22X, 100X, wide-angle, and a special 180-degree fisheye from the famous Pagoda.

Decked Out Trucks: EVS, Grass Valley, and More in the Compound

Inside the operational nucleus, five trucks supplied by IMS Productions will house a