“Happy race day!” It’s something you hear quite often on the Sunday of Memorial Day weekend in Speedway, IN. The three-word phrase is a greeting to those experiencing the pageantry for the first time and a welcome to those who are “Back Home Again in Indiana.” Although the glitz and glamour of the Indianapolis 500 begin around 9 a.m. ET, the real magic starts just a couple of clock revolutions past midnight. From well before sunrise to celebration in Victory Lane, SVG offers a look behind the scenes on IMS Productions’ big day at Indianapolis Motor Speedway (IMS) this year.

3:45 a.m.: Hotel Departure
Ken Ferguson, operations manager, IMS Productions
, wakes up before the sun reaches the horizon and walks to his car in the hotel parking lot of the Embassy Suites by Hilton Indianapolis North. The drive will take 20-25 minutes, even this early. As he drives down the highway and makes his way toward Indianapolis Motor Speedway, streaks of lightning reveal a storm brewing in the distance. The forecast indicates a higher than 80% chance of scattered thunderstorms that may last the entire day. During the previous day, a 2:30 p.m. rehearsal of the pre-race studio show was suspended as rain rolled through the area. If the weather predictions are correct, production plans may have to be changed. 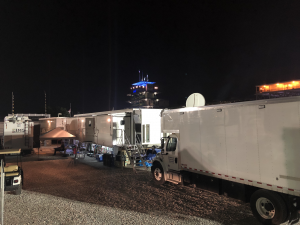 4:15 a.m.: Crews began to arrive at the TV compound at Indianapolis Motor Speedway

Members of the IMS Productions and NBC Sports teams trickle into the TV compound in the parking lot of the track. Given the stormy forecast, regular shoes are exchanged for ones with water-resistance, and rain jackets are kept within arm’s reach. Throughout the early-morning hours, Ferguson and Kevin Sublette, president, IMS Productions, glare intently at the weather radar on computer screens in their offices. At 4:28 a.m., lightning is reported 20 miles away from IMS.

4:30–5:15 a.m.: Crew Call, Breakfast, and Full Staff Meeting
Reporting for duty, the two companies’ production staffs convene within the food tent for a quick breakfast and brief meeting. By 4:36 a.m., the lightning has entered the eight-mile radius, also known as the “inner ring.” With the latest update, the full equipment setup scheduled at 5:15 a.m. is canceled until further notice. As the meeting commences, lightning strikes are occurring every four minutes. Although the day’s weather seems dreary, Ferguson, Sublette, and Ken Fitzgerald, technical manager, IMS Productions, discuss the plan for putting on a great show and provide perspective on the hard work done during the past month. When the meeting adjourns, a brief rain shower moves through the area. 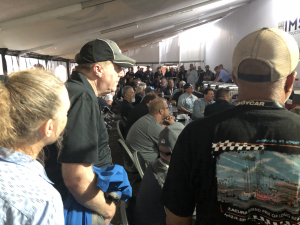 5:00 a.m.: Teams are treated to breakfast and briefed on the current weather situation.

5:30–7:30 a.m.: Personal Traditions, Quick Fix, Transmission Testing
After the rain dissipates, Sublette boards a golf cart and goes on a journey that he has made for nine straight years. Halting along Gasoline Alley, he creeps into the entrance of Pit Row and onward to the track near the Yard of Bricks. Around this time every year, Sublette takes time to reflect and appreciate the beauty of this event with a lap around the track. As he reaches Turn 3, the ceremonial military cannon to signify the opening of all gates pierces the silence at 6:00 a.m. Five minutes later, a quick trip down Pit Row is in order. Over his walkie-talkie, a member of his team explains that one of the poles used for the Fletcher overhead camera at No. 10 Will Power’s Pit Box is bent. Sublette heads down the homestretch to assess the situation. After short contemplation, the team is able to solve the problem.

Meanwhile, transmission testing is well underway back at the compound. In the TX-4 truck, Kevin Husband, director of satellite communications, IMS Productions, is hard at work resolving last-minute connectivity issues. At 6:28 a.m., the weather begins to work in their favor, with the storm moving slightly north and rain starting just after the green flag at 1:00 p.m. 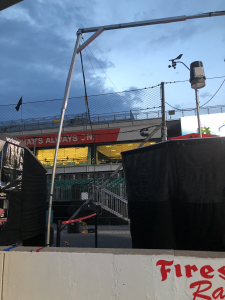 7:30–9:00 a.m.: Rehearsal
Teams file into the IMS Productions HD-6 A unit for pre-race coverage. Inside IMS, the festivities are underway with the Parade of Bands. The NBC Sports production team runs through their final checks of the day, starting at 8:30 a.m. during rehearsal of the opening segment. As the three-hour studio show goes on-air at 9:00 a.m. sharp on NBCSN, the preparation stages are behind them.

9:00–11:00 a.m.: Live on NBCSN
Mike Sheehan, coordinating director, NBC Sports Group, and Tom Popple, VP, studio operations and facilities, NBC Sports Group, handle the first two hours of the coverage under clear skies. At 10:40 a.m., fans revel and cheer as the drivers make their way down Gasoline Alley to the starting grid on the track.

11:00 a.m.–12:45 p.m.: Broadcast Shifts to NBC
The pre-race show shifts to nationwide channel NBC for the last hour or so. On the radar, the oncoming storm seems to have slowed to a creep outside the city limits. At 12:38 p.m., four words cut across the landscape, evoking a loud response from the crowd: “Drivers, start your engines!”

12:45–3:30 p.m.: Let’s Go Racing
The green flag flies high atop the starter’s perch, and now the broadcast becomes a race against time. Two cautions at Lap 6 and Lap 72 cause minor delays on the track. At 2:00 p.m., the drivers enter Lap 100 to pass the halfway mark and make the race official in the record books. On the weather front, Mother Nature performs something of a miracle, splitting the radar blips of rain to above and below IMS and creating a rain-free bubble. At 3:15 p.m., an intense crash involving multiple cars at Lap 178 brings out the red flag. A short postponement may prove costly with slightly over 20 laps left. 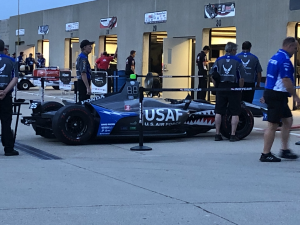 3:45 p.m.: Time To Celebrate a Successful Race
As Simon Pagenaud crosses the bricks on the 200th and final lap, the teams at IMS Productions and NBC Sports can exhale, having completed an entire race. Among visions of constant stoppages, stressful alterations, and spontaneous obstacles, not a single drop of rain hits the cars at Indianapolis Motor Speedway, and the 103rd running of the Indianapolis 500 is a success.

3:45–5:00 p.m.: The End of a Long Day
Pagenaud enters Victory Lane, receives the winner’s wreath, and continues the treasured ritual of the 102 winners before him by showering himself with a tall jug of whole milk. The coverage transitions into the hour-long post-race show on NBCSN at 4:00 p.m.

When the clock ticks to 5:00 p.m., the teams break down their equipment and enjoy a meal. Despite needed rest, the IMS Productions folks pack up and prepare to head north for the two-day Chevrolet Detroit Grand Prix on June 1-2.