Dignitas welcomed their new partner Caffeine, the social broadcasting platform, as an exclusive broadcast partner. Through a multi-year partnership, all official Dignitas team-focused content will be exclusively live streamed on Caffeine. 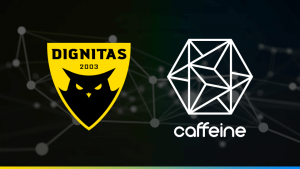 With access to the world-renowned streamers and players on Dignitas’ six esports teams, Dignitas and Caffeine will produce original digital series that highlight popular teams, including Dignitas’ World Championship-winning Rocket League and female CS:GO teams. Caffeine will also become the official broadcasting partner for Dignitas’ upcoming influencer initiative that will produce original content and live shows for leading influencers at the confluence of gaming and pop culture. Live original programming and exclusive Dignitas content can be found now on the franchise’s branded channel: Caffeine.tv/Dignitas.

“We are excited to welcome Dignitas, its teams, players, and dedicated fans to our growing community,” said Ben Keighran, Founder and CEO, Caffeine. “Dignitas can now create truly interactive live shows that bring its players and teams closer to the fans — content that can only exist on Caffeine’s zero delay streaming platform.”

“In Caffeine, we have found a partner that not only shares our love for gaming and esports but sports, music and pop culture as well. The confluence of these verticals is where the future of the industry is going,” said Michael Prindiville, CEO, Dignitas. “With features like live hosting, Caffeine is revolutionizing the live streaming game. We couldn’t be more excited to unveil our new diversified content offerings around this platform. I see a future where traditional sports fans absorb live sports content just like gamers do – through the eyes and voice of their favorite influencers – creating yet another meaningful advancement in both the evolution of media and the bridge between sports and gaming.”