ESPN+ has reached an agreement to be the exclusive English-language home in the United States for the 2019 CONMEBOL Copa America, one of the world’s preeminent international soccer competitions. The 46th CONMEBOL Copa America will be played June 14 – July 7 throughout Brazil. All 26 matches – from the opening kick to the Final – will stream live on ESPN+, the leading direct-to-consumer sports video service. ESPN+ will also carry the matches in Portuguese. 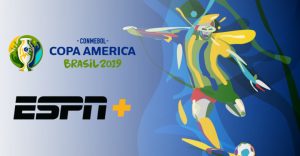 Copa America debuted in 1916 – 14 years before the inaugural World Cup – and is the oldest and longest-running continental tournament in soccer. The biennial competition features the 10 South American national teams (Argentina, Bolivia, Brazil, Chile, Colombia, Ecuador, Paraguay, Peru, Uruguay and Venezuela) of the COMNEBOL Confederation, as well as two non-COMNEBOL teams invited to participate. This year, 2022 World Cup host nation Qatar and Japan, which reached the knockout round of the 2018 World Cup, will compete in the tournament.

In just a year, ESPN+ has established itself as a must-have service for soccer fans in the U.S. In addition to 2019 Copa America, ESPN+ is home to more than a thousand matches from top leagues around the globe, including: