Over the past decade, production crew for the event has expanded from 20 to 160

It’s a good time to be a fan of the Bruins. While the ones from Boston are tied with the St. Louis Blues at two games apiece in the Stanley Cup Final, the collegiate version from UCLA had a grip on the Women’s College World Series after a 16-3 victory in Game 1 against the University of Oklahoma. As more eyes discover the action in Oklahoma City, ESPN is deploying its largest onsite production of the tournament, including studio programming, an increase in staffers, and efficient workflow. 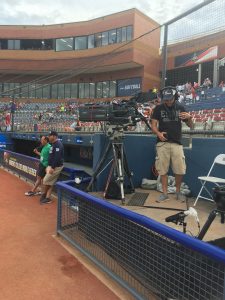 ESPN has a total of 36 cameras onsite, including four with HFR in various locations.

“We have a small army here. In the early rounds for Games 1 through 14, we’re credentialing about 160 people that are working on the ESPN show,” says Meg Aronowitz, coordinating producer, ESPN. “Between the studio show, our dayside crew, our nightside team, ESPNW, SEC Network, [and others], we’re pretty proud of how far this has come and how far it has grown, especially those of us that have been doing it for a long time. We had about 20 people here a decade ago.”

When fans of the eight remaining college teams arrived in Oklahoma City, they saw a massive expansion of OGE Energy Field at the USA Softball Hall of Fame Stadium, the venue that has housed this tournament for 30 years. Although the renovated structure will be able to fit more fans, ESPN is enjoying the numerous infrastructure changes as well. One immediate upgrade was a permanent location for the on-air team of Beth Mowins, Jessica Mendoza, and Michele Smith.

“We have to give big kudos to the city of Oklahoma City, USA Softball, and the NCAA, because the stadium is in mid renovation,” she says. “We have a demo area in there, so we can do what we’re calling ‘Diamond Demos’ with [analyst] Amanda Scarborough and Mendoza. [Also,] it’s been a really great opportunity to improve our camera positions and is something that we haven’t had in the past. For us, the stadium is new, but there is still another phase to-go heading into next year, which will add about 4,500 seats.”

A total of 36 cameras will leverage the latest refurbs to the stadium. Although a majority of the complement will comprise fixed POVs, there will also be 19 handhelds and robotics. The main tech highlights of the final three-game series are four high-frame-rate cameras from various positions and a fixed-wing airplane used exclusively for the championship matchup.

With the Women’s College World Series slated for primetime, pre/postgame studio programming will provide context to the players and storylines occurring on the field. 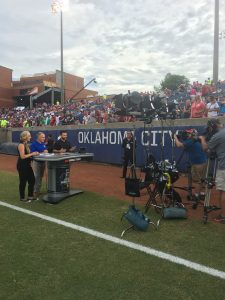 Baseball Tonight is setting the table on the field before every game of the series.

“[These shows] just make the tournament feel bigger,” notes Aronowitz. “The event drives viewership, but the studio tells the stories. [The onsite presence] has allowed us to dive a little bit deeper into some of the really compelling stories that develop the stars.”

Before each game, Baseball Tonight host Adam Amin and analysts Tim Kurkjian and Scarborough will take fans from the top of the hour to the first pitch.

“Baseball Tonight, we really feel, [is] going to help link the Major League Baseball audience with softball and to show that [UCLA’s] Rachel Garcia and what she’s accomplished can compare with a lot of major-league players and their stories,” said Aronowitz. “We hope that it’ll grow the audience and give viewers that maybe haven’t seen softball [a reason] to dial in.”

A staple of ESPN’s softball community, the 7Innings Podcast will be live from Oklahoma City to provide an alternative viewing option on ESPN3 (during last night’s Game 1) and ESPNU (during the rest of the final series) for viewers at home. Amin, Scarborough, and Braud will be joined by reporter Tiffany Greene at a dedicated setup down the right-field line.

“We’ve shortened those commercial breaks,” she continues, “so, if people are watching the game, they can tune into ESPN3 or ESPNU and experience something a bit more fun and laughable. Between Amanda [Scarborough] and Kayla [Braud], these are folks that have played on this field and in this game. So, while Jessica [Mendoza] and Michele [Smith] cover the X’s and O’s of what’s happening analytically, we want 7Innings to be more lighthearted. It’ll also allow us to bring on all the guests and alumni to the set to interact with our talent.”

Helping Hand: Onsite and Offsite Production Support
Although the studio shows give depth to the overall production of the Women’s College World Series, the onsite staff takes responsibilities off Aronowitz’s plate.

“We simply just don’t have enough time during the games. [Host] Molly McGrath and [analysts] Danielle Lawrie and Braud have done a terrific job supporting [us] in the studio,” Aronowitz says. “We’re able to have a studio show onsite to help tell the stories during a rain delay: [for example, the story of University of Arizona pitcher] Taylor McQuillan and the loss of peripheral vision in her eye and how she still pitches. That’s something that we can do only with a live hit [by reporter Holly Rowe], but, by having that studio presence, we can tell that story and really drive people to those stars and make a connection.” 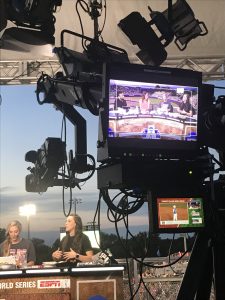 ESPN has brought the 7Innings Podcast along for the event, with a dedication studio setup in right field.

To process the deluge of content being churned out, Creative Mobile Solutions assisted ESPN with their REMNAS (Remote Near Access Storage) initiative for file transfer at two offsite locations.

“We’ve changed our edit philosophy and have an edit group that’s here editing all of our teases and high-end content,” Aronowitz explains. “We are [also] completely connected to our Bristol, CT, and Charlotte, NC, servers.

“We’re providing all types of content that [Bristol] is running in all of the shows to support the Women’s College World Series, which has been terrific this year,” she continues. “It makes it that much easier when you push all of the items and elements that we’re editing [in Oklahoma City] right to them through that REMNAS server.”

ESPN’s Commitment to the Game of Softball
With UCLA on the doorstep of its first national championship since 2010, ESPN is closing in on the finale of its 2019 softball coverage. For Aronowitz, who has spearheaded this project for 13 years, the sport has continued to evolve into the production that it is today.

“I remember a time where we were tape-delayed for the championship finals and a time where there were no seats going up and down the outfield,” she recalls. “We were lucky if we got a crowd of 2,000 people in the stadium. [Back then], there was no talk of renovation or growing the sport. The commitment ESPN has made to softball is significant,” she adds. “I think this sport has evolved because we all look around and don’t forget where we came from. That’s everyone from the teams and the coaches to the NCAA and ESPN.”

And despite the heightened workload over the two-week series, the network always looks forward to the time spent in Oklahoma City.

“There is not a person on this crew that doesn’t want to be here and doesn’t get excited about being here,” says Aronowitz. “We did over 1,200 regular-season softball games, 104 Regional games in four days with 16 different production teams, and 19 Super Regional games in three days with eight different production teams, but the Women’s College World Series is the one we put a star next to on our calendar.”

ESPN’s presentation of the Women’s College World Series continues during tonight’s Game 2 at 8:30 p.m. ET. If the University of Oklahoma is victorious, the winner-take-all Game 3 will take place on Wednesday, June 5 at 8:30 p.m.