Trekking between Portland and Toronto adds complexity to the preparations

Each year, one of the most significant challenges confronting the ESPN operations team preparing for its colossal NBA Finals production on ABC is the uncertainty surrounding the two locations of the series. As a result, ESPN must transport resources and build its immense onsite infrastructure on an extremely short timeline. This year, the NBA Finals’ first-ever series north of the border further complicated matters for the operations team, which had to prepare on the fly for Game 1 of the Raptors-Warriors series in Toronto. 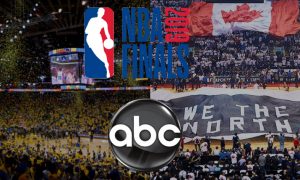 “Every year is new and exciting, with its own set of challenges [for the NBA Finals],” says Patty Mattero, senior operations manager, ESPN. “The largest hurdle [this year] was the planning and preparing to move everything from the Western Conference Finals in Portland to the potential start in Toronto. All trucks, equipment, and mobile units had to start moving east before the Eastern Conference Finals were over, which made preparations to cross the border a necessary and detailed carnet process. Not to mention, we had to knock down Portland in record time as there was a concert loading just a few hours after our game.”

Inside the Compound and on the Court
In Toronto, Game Creek Video’s 79 (A and B units) and Spirit (A and B) mobile units are handling the game coverage, and its Victory unit (A and B) is home to ESPN’s NBA Countdown studio coverage. Harb Productions’ 43-ft. Gracie is also in Toronto for First Take, The Jump, and other onsite shoulder programming. Also in the jam-packed Toronto compound are two NBA mobile units, 10 office trailers, and an ABC uplink and world-feed uplink.

“We had to be very creative in trying to make all facilities, office trailers, mobile units, uplinks, generators, etc. fit into a smaller television compound space in Toronto,” says Mattero. “Also folding into our overall planning is the space and infrastructure requirements of NBA, NBA TV, and this year’s local broadcaster for the Toronto Raptors.

“Given the uniqueness of the Toronto venue, we are looking into the possibility of adding SupraCam at Jurassic Park,” says Mattero. “[We are] looking to potentially use it for Game 5 and possibly Game 7 if all details can be worked through.”

In addition to the linear-TV feed, ESPN also continues to deliver unique viewing experiences during the NBA Finals, including a special youth-oriented edition of its Full Court Press alternative stream on the ESPN app for Game 2.

After debuting alternative streams featuring Second Spectrum video tracking technology earlier this season, ESPN has ramped up its efforts during the Playoffs and Finals. The streams allow viewers to watch various isolated broadcasts of the game on ESPN, the ESPN app, and ESPN3. Among these are ESPN Mode, featuring a virtual game camera with tailored Second Spectrum treatments, and Player Mode which uses two Above the Rim (cameras fed to Second Spectrum) for tailored analytic treatments. ESPN is also once again streaming a Layup Lines feed, which takes the traditional ATR show cut of two Above the Rim cameras during pregame warmups and features audio with Enhanced Affects, featuring the public-address mic upfront.

ESPN’s daily shows consisting of First Take, Stephen A. Smith Show, and The Jump (airing from 10 a.m. ET through tipoff) are being produced in Toronto at the Draught Deck Bar inside ScotiaBank Arena, as well as from a secondary, 16- x 20-ft. stage in Jurassic Park featuring three cameras, a jib, and a Steadicam.

“Starting at 3 a.m., prior to air [in Toronto], we come in and build our remote studio locations from scratch,” says Mattero. “Once the shows are over, we strike everything as if we were never there.”

In Oakland, the shows are being produced from a set overlooking Lake Chalet.

“Finding places that can accommodate a live interactive audience in the early-morning hours for shows like First Take can be challenging,” says Mattero. “Our dedicated operations and production teams work together to find the best suitable locations that work for all. [It’s] a great partnership between the two departments.”

ESPN has increased the role of Hoop Streams at the Finals with 60 minutes of live coverage prior to every game in Toronto. The first 30 minutes take place courtside, and then the show moves to the outside location for an additional 30-minute live broadcast up close with the fans.

NBA Countdown airs from a suite located inside the arena on game days from 8:30 to 9 p.m. and features the traditional ESPN NBA studio desk with show-specific graphics, as well as a jib and two hard cameras.

In addition to ESPN’s domestic coverage, ESPN International’s is delivering on-court pregame/halftime/postgame hits. ESPN Deportes has an on-camera commentary positions for ESPN (incorporating a POV to capture look-in coverage), as does ESPN Brazil. ESPN Australia has its talent located at ESPN HQ in Bristol (with an onsite switched camera feeding back) and will produce a postgame show, dubbed Ball or Nothing. In addition, ESPN is facilitating Tencent’s courtside pre/postgame live reporter coverage for China, as well as a postgame live show with an additional taped show using a 50-in. monitor display for the reporter’s analysis.