The usually understated world of theme and scoring music for sports was upended in recent months when music used by a number of collegiate sports teams and at least one NBA team for their Twitter feeds caused their accounts to be suspended.

College social-media accounts, which have long used sports as part of new-student recruitment, have been drawing the ire of and, in more and more cases, action by music publishers, who contend that they are illegally using copyrighted music tracks as part of their online campaigns. 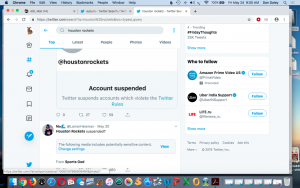 The Houston Rockets’ Twitter account was suspended in May in accordance with a Digital Millennium Copyright Act (DCMA) take-down notices.

In recent months, Twitter accounts including @AuburnFootball and Rutgers’ @RFootball were removed after Digital Millennium Copyright Act (DCMA) take-down notices were filed by copyright holders. Similar actions have been reported against Alabama, North Carolina State, and the University of Georgia – Atlanta. In at least one case, the action has extended to the major leagues as well, with the Houston Rockets’ Twitter account suspended in May.

In the case of the colleges, some industry sources suggest that university social-media operators were not aware that the live-performance music licenses the schools annually pay for to performing-rights organizations in order to use copyrighted tracks over the PA systems in stadiums and arenas did not extend to online applications. Other sources were, let’s say, less charitable when it came to the Twitter users’ knowledge of copyright matters.

In any case, the alleged infringements have been tolerated for some time by music publishers, who derive significant royalties from sports networks for their live and broadcast copyright uses through such agencies as ASCAP and BMI. That forbearance has apparently come to an end this year.

Although colleges are most often the transgressors, professional teams’ social-media operations also occasionally overstep the use limits. Gutknecht says that the solution is to look to the assurances that library-music firms offer for music that captures the essence of the hits often used but without the potential for infringement, such as this APM clip that cleverly emulates HBO’s Game of Thrones without inviting litigious decapitation.

“The ironic thing is that we have some of the best hip-hop [beats] out there, just not the street cred that comes from having them by Kendrick Lamar or Migos,” Gutknecht quips. “But using music without a license has consequences.” The DCMA take-downs seem to be having an effect, he adds, and more universities are approaching the company about licensing music.

Licensing is at the root of other music for sports applications, as more established music artists enter the production-music sector for sports, where the familiarity of viewers with their music can be an advantage. Morgan McKnight, executive director, Production Music Association (PMA), the sector’s trade group, says that those artists, many of whom are older and whose revenue comes from catalog inventory, rely heavily on royalty payments. However, at a time when streaming has upended the economics of music distribution, and, as the broadcast industry undergoes a massive consolidation that is already producing cost-cutting measures, more production music is coming to the music-library market through sites like Soundcloud, which use blanket licenses instead of per-use royalties. McKnight is adamant that the PMA is staying with the royalty model, which is codified in the organization’s bylaws.

“We don’t support royalty-free music or buyouts; we’re in favor of the PRO model,” she says, referring to performing-rights organizations like BMI and ASCAP, which collect royalties on behalf of composers and publishers, including production-music libraries.

McKnight acknowledges that some libraries might offer both royalty-base and royalty-free tracks. But, she adds, it’s not up to the PMA to police its members; rather, the organization continues to have a dialog with broadcasters about why a royalty-based approach is better for all.

Production elements — whooshes, beeps and other sound effects — that broadcast sports (and news) have conventionally used as transitional effects are still sound-library staples but are also burrowing deeper into live sports production, says Peter Alexander, sales manager, Sound Ideas. And even they are getting somewhat more stylized by genre, as major-league sports continue to attach themselves to key music genres, such as rock and country for the NFL and MLB, hip-hop and rap for the NBA, and a mash of styles, notably EDM and techno, for college and esports.

“Teams and leagues and venues are now using genres as part of a strategy to reach out to new demographics and get them into the stadiums,” he explains. “Individual sports do still tend to go with one genre or another in general, but they’re increasingly using other genres to make themselves more appealing to different demographics, with hip-hop leading that trend.”

As the sound systems in stadiums improve, it has created an opportunity for the use of higher-resolution audio files. Alexander says that most files are now shipped (as downloads; the industry has mostly eliminated CDs in the past two years) as 16-bit/48-kHz WAV files, which are the same format but of slightly higher resolution than the 16/44.1 specification for CDs, and 24/96 files are available. In addition, the standby MP3 file for on-air use is increasingly supplanted by the MP3-320 format, a higher resolution in common use by European broadcasters.

The More Things Change…
Like sports itself and the broadcasting industry around it, the music for sports on television tends to change only slightly and incrementally. It remains grounded in what have become the basics of sports music, such as the triumphal brass and crunchy guitars that characterize NFL underscores and themes, even as it seeks to incorporate elements that have become firmly embedded at pop music’s highest echelons, from hip-hop beats to the melismatic vocals of R&B (the word watched at 1:57) during the national anthem.

In fact, urban-music elements remain the most ubiquitous ones in recent music choices. Whitney Arnold, VP, music services, Stephen Arnold Music, whose production-music arm The Vault has supplied production music for ESPN, the Denver Nuggets’ Altitude Sports, and Golf Channel, cites recent productions for those and other clients that lay traditional elements over urbanesque percussion tracks. “It can’t be over-the-top hip-hop,” he adds. “It has to more suggest it than put it explicitly out there.”

But those modified hip-hop feels are ubiquitous now, finding their way into far more productions than the NBA applications they entered this arena through. Arnold notes Sony Interactive’s MLB The Show — 18, a videogame that lays the traditional horn stabs over a driving hip-hop percussion track seasoned with contrapuntal DJ-scratch effects.

“[Sports music] has become more hybrid recently, with more genres combined into one track,” he says. “[Those clients] want the traditional elements that they’re used to hearing on, like, Fox Sports, but they also want to stay current, so we’re always looking for a modern middle ground.”