In a Stanley Cup Final that was 49 years in the making, it’s only fitting that a boisterous crowd in Boston will witness the first Game 7 since 2011. After either St. Louis Blues captain Alex Pietrangelo or Boston Bruins captain Zdeno Chara lifts the 34.5-lb. trophy in the air, NBC Sports will close up shop on its two-month-long coverage of the NHL postseason with a strategy similar to last year’s. 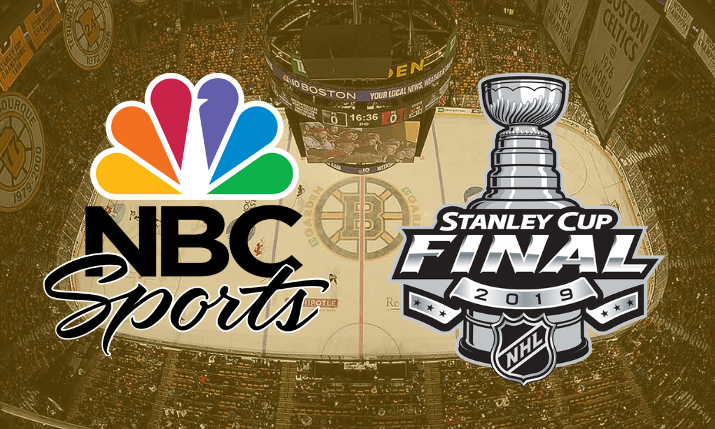 “Our setup for the Stanley Cup this year closely resembles that of last year,” says James Stuart, senior director, operations, NBC Sports Group. “Our crew size of roughly 160 people is mainly the same as well. We continued with our two–A-unit plan for the game and studio shows that was implemented last season.”

A Similar Final But With Some Additions

Under the dedicated–mobile-unit plan, NEP is handling all activities in St. Louis and Boston. For contests in the shadow of the Gateway Arch, the game has been produced in the ND6 truck, and studio programming has been generated inside NCP8’s A and B units. In Beantown, ND5 controlled the game broadcast; Pegasus A and B units, studio content.

A total of 54 cameras have been deployed throughout the championship series: 46 feeds for the game, eight for the studio. Five Sony HDC-4300’s with super-slow-motion playback, one Sony HDC-4800 with 4K capability, an RF wireless handheld, three Grass Valley super-slow-motion robos, and an RF MōVI for pre/postgame content on the ice are just a few tech highlights at the network’s disposal.

Stuart and company have made some notable changes to the layout. A noteworthy addition to the super-slow-motion complement is the 6X “hothead” camera inside the scoreboard. Others include the use of new camera lenses as well as six new POV locations dispersed throughout each arena. One particular addition hovers above the skies of the city.

“A memorable moment [for us] is getting clearance from the FAA to fly a helicopter over Boston for Game 7,” says Stuart. “The Red Sox are in town and have a ‘no-fly [zone]’ in place for their games. We applied for a waiver with the help of our Boston affiliate, WBTS NBC10, and received approval.”

The process of receiving clearance from the FAA is an arduous task in itself, but that wasn’t the only obstacle that needed to be overcome during the past two months. Along with teams from NBC Sports Boston, the operations team needed to work around restrictions laid out by the city.

“The main challenge this year was having to set-up and strike our outdoor set in Boston for the Stanley Cup. This was due to being on the street and having the city close [the area] only on game days,” says Stuart. “For Game 7, we will be able to produce only our pregame [show] from our outdoor set, and [we’ll] have to strike it before the game ends and the crowd lets out.”

Series always have their conundrums. A long postseason, unfortunately, comes with conflicting schedules.

“Another challenge was working in cities/markets that also had NBA teams [that] qualified for the playoffs, such as Denver, Brooklyn, Toronto, Boston, and Golden State,” says Stuart. “We also worked in cities with a large college/university presence during graduation season, which made securing hotels and transportation difficult.”

Amongst all the chaos, the network is receiving a much-needed boost from its Stamford, CT, headquarters.

“Stamford is housing all of our edit [crews],” says Stuart. “All of the content produced from onsite is fed back via file transfer. We increased the size of our data pipe from 600 MB to 1 GB for the Stanley Cup Final.”

And that’s not all. NBC Sports has leveraged its collaboration with multiple Canadian networks to alleviate some of the stress.

“A highlight [of this postseason] was collaborating with Rogers Sportsnet on the broadcasts in Calgary and Winnipeg,” says Stuart. “We worked closely with them to streamline production by taking their feed and adding in our own announcers, replay wipe, and score bug.”

Specifically for the Stanley Cup Final, Rogers Sportsnet is supplying two POV feeds, one feed from a Grass Valley robo, and ankle cams on the ice. In addition, TVA Sports will also offer a helping hand with two rendered, super-slow-motion feeds from inside the goalposts.

Putting the Beast to Bed: A Proper Send-Off for the Series
Throughout a journey that included 16 cities, four time zones, and countless miles traveled, the operations team has enjoyed the entire playoff run. And, although the network has witnessed Game 7’s in five series this season, NBC Sports will do its best to provide a fitting end to yet another one going the distance.

“There’s nothing better than a Game 7 to determine the winner of the Stanley Cup,” says Stuart. “The feeling produces a shot of adrenaline that will carry everyone across the finish line. Being a part of something special will provide memories that will last a lifetime.”

Game 7 coverage of the Stanley Cup Final between the St. Louis Blues and the Boston Bruins begins at 6 p.m. ET on NBC.