San Francisco-based cinematographer/colorist Stephen Berke has designated the Panasonic VariCam LT as the “A” camera on a gamut of projects ranging from narrative to corporate/commercial to music videos. 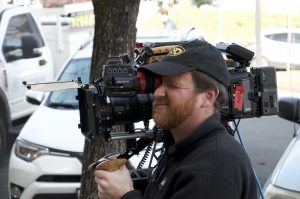 Notably, Berke used his VariCam LT as Director of Photography for an award-winning short film, “Snaggletooth,” that had its New York premiere at the 2019 Tribeca Film Festival. Recent corporate/commercial work shot on the VariCam LT has included spots for San Jose’s M8trix Casino, as well as projects for Google, Adobe, and Genentech.

Berke is the DP for two additional short films, “The Interview” (currently showing on the festival circuit and Best in Show winner at the 2019 Albany Film Fest) and “The Shepherds of Cat Island,” a 10-minute single-take, premiering soon.

“I love the VariCam’s color science, its organic look and more saturated palette,” Berke said. “And I firmly believe that dual native ISOs should be a standard feature on any cinema camera.”

The DP relied on his go-to VariCam LT asset—its dual native 800/5000 ISO-throughout the “Snaggletooth” shoot last year. “We spent four days on location in an historic San Francisco Victorian mansion,” Berke recounted. “The home was immaculately restored, which significantly impacted how much gear we could bring in. The LT was ideal for a project that strictly required a smaller, unobtrusive package and lower light levels.”

On the short shoot and other assignments, Berke typically shoots at ISO5000 dialed back to 3000/2500 in low light. “That’s a sweet spot for me, allowing me to use fast lenses and achieve plenty of sensitivity. The noise at those levels is perfectly acceptable,” he said.

“Even if an assignment is finished in 1080p, I mostly shoot in 4K (recording internally at 4K DCI 4:2:2), affording the client the option to reframe/recompose in post,” Berke added. His lens choices frequently include Fujinon and Tokina zooms, and Cooke Primes.