Since Fox Sports’ first U.S. Open five years ago, the team has consistently looked to push the boundaries of broadcast technologies. Part of that is a love of tech and a drive to tell the story of a golf event in new ways. But part of it is also that Zac Fields, SVP, graphic tech and innovation, Fox Sports, is a big golf fan who spends plenty of time watching golf coverage from around the world. 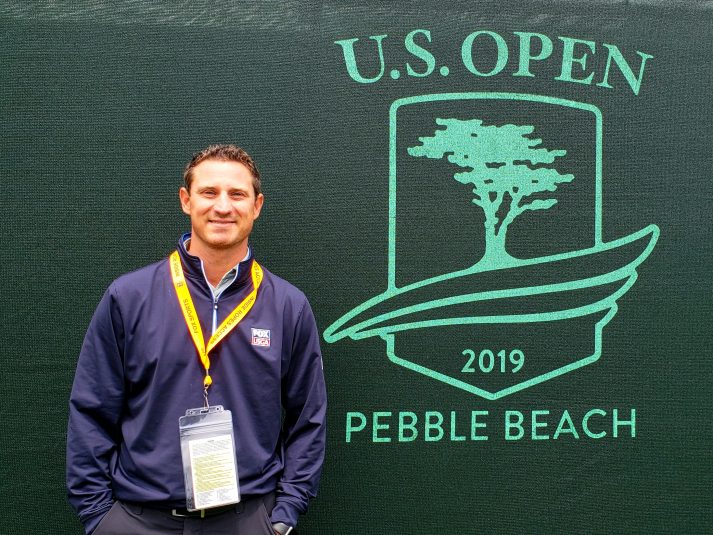 “We are stewards of [the U.S. Open], and we want to show it through the best possible window,” says Mike Davies, SVP, technical and field operations, Fox Sports. “And with someone like Zac, who is a rabid golf fan, we have someone who can see whether something is a worthwhile technology from the golf fan’s point of view.”

Fields says he and the team are quite happy to go into an event knowing that some of that innovation will involve testing out new things during the actual event.

“Sometimes, that is the only way you can achieve something that is really great,” he explains. “If you’re always going in with limitations, you’re never going to know what you can really do.”

The Towercam this year is a perfect example. For the U.S. Open at Chambers Bay five years ago, the team had two Towercam units that could lift a camera to 17 ft.

“They worked well,” says Fields, “but they were quite clunky and a big operation for what we achieved: they needed to be cabled, and that limited how they could be used. This year, we have one that can go up 33 ft. for a higher vantage point, and, at the top, we have a Shotover gyrostabilized mount, so we have calibrated pan, tilt, and zoom. That allows us to get those dynamic shots with the trace, and it’s a great look that no one has ever done before.” 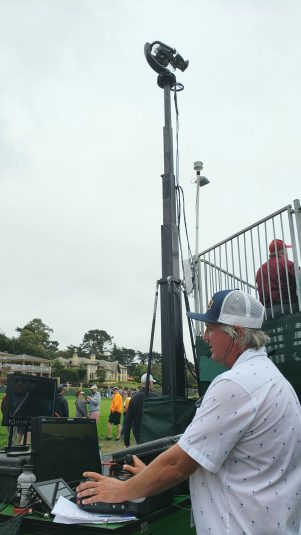 Towercam on the Hole 6 tee box at the U.S. Open.

And it wasn’t until the Towercam was actually fired up and used that the production team saw its real potential. It’s located behind the stands at the 6th tee box and can also cover play on the 14th tee and fairway, which runs alongside Hole 6.

“The expectation was, we would get a great reverse shot looking to 14 and also be able to use it on 6,” says Fields. “But it turns out that using it on 6 has been much better and impactful.” The Towercam moved to Hole 17 for Saturday’s round.

One of the things the team takes pride in, he adds, is a commitment to tracing golf shots using a combination of Toptracer, Trackman, and Virtual Eye. The three companies work together as one unit called Toptracer: Trackman accumulates data of the ball’s flight, and that data and the ball’s flight path are merged over the virtualized CG environment provided by Virtual Eye. The Toptracer and Trackman systems also power shot tracking over live video.

“We see tracing as akin to the yellow line in football: you need it,” he says. “If you can’t see the ball, then you should have a trace. And we do that more than anyone, whether it’s RF, on the tee box, or the slabs on nine holes. And now we have tracing on the practice range. We see a huge value to tracing, and it is a necessity on the broadcast.”

Adds Brad Cheney, VP, field operations and engineering, Fox Sports, “The tracer really is the most important thing out there. The more of it you have,  the more of it you want. And now we can bridge from the tracer in live video to AR and not only show people a 3D model of the hole but put them on the course. It’s important for us and the game.”

Fields says conversations with technology partners throughout the year as they collectively look to move tracking and other technologies forward.

“Our first year, we tried some of what we are doing now using a calibrated camera, and it wasn’t quite ready,” he explains. “But we were already talking about it for the next year. One thing we’ve done well is try new things, see what works, and then grow it the next year. It’s a great collaboration between technical and production teams: I can get a text from [U.S. Open producer] Mark Loomis about something he saw on Daytona 500 and how it could apply to golf.”

The AR and graphics components rely heavily on data, and Cheney says Fox worked with SMT to customize versions of the USGA data set.

“We’re not only getting the normal data but also layering in all of our radar and tracking data,” he says. “We’ll be able to go back year after year and do a lot of interesting things.”

Fields also points to the real-time Foxbox that keeps viewers constantly updated on the leaderboard.

“One of the hardest things in golf is telling the story in a linear fashion when everything is happening simultaneously,” he says. “With a leaderboard up there constantly, we don’t want to reveal a score before the viewer sees it happen, and, by staying in sync with the video story, it can be quite impactful. It takes a lot of communication between the operator and the team, [who] need to know what the next shots are going to be and if it is live or on tape.”