At Northwest High School in Justin, TX, A/V production students in the school’s Creative Media Production Academy are tasked with delivering daily live broadcasts to every classroom in the complex. Their TV production facility is equipped with a full suite of Panasonic pro video equipment, including three AK-UC3000 4K/HD studio camera systems with an AK-HRP1000 Remote Operation Panel, as well as AW-HE130 and AW-HE40 HD pan/tilt/zoom cameras. 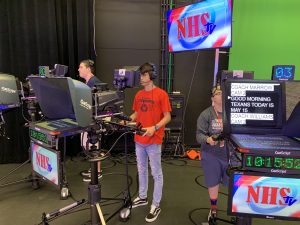 The students produce news segments with 10 AG-DVX200 4K handheld and eight AG-AC30 HD AVCCAM handheld camcorders. NHSTV’s daily 10-minute broadcasts are sent via webstream to campus classrooms and are also broadcast on YouTube™ Live. NHSTV has won Best Daily Live Show in the Southwest four years in a row, and has been cited as one of the top four student-produced newscasts in the nation.

Jeremy Rawe, creative media production coordinator, Northwest Independent School District, explained that approximately 110 students in grades 9-12 specialize in A/V Production, with other Academy pupils concentrating in Graphic Design or Commercial Photography. Rawe and a colleague utilize all the Panasonic gear as the basis for their instruction in A/V Production I and II classes, with second-level students ready to go to work for NHS TV.

Rawe said that the Creative Media Production Academy has been in existence for 10 years, and that the students have used Panasonic professional video cameras throughout the life of the program. When he saw the AK-UC3000 at an industry trade show, Rawe quickly determined that the 4K/HD camera system would be the ideal choice as the heart of NHS’ new television production facility, which was completely renovated last year.

“We have ambitious goals at the Academy — to ensure that our students arrive at college focused, prepared to succeed and already equipped with life skills supportive of whatever field they choose — and we wanted equipment commensurate with these objectives and able to make our newsroom as true-to-life as possible,” he said.

“Obviously, our students enter the Academy as amateurs, so the UC3000’s looking good right out of the box and being intuitively operational is invaluable,” Rawe continued. “The focus assist is an awesome feature to help the operators pull focus—it has even made things easier for some our kids who have vision issues, letting them participate fully in the program.”

Rawe noted that the AW-HE130 is installed in the studio high on the wall above the set for overhead angles, and the AW-HE40 is positioned in the control room, primarily for viewing by the teachers as they monitor, supervise and coach the student-run broadcast.

While NHSTV’s broadcast workflow is currently built around the 1080p format, Rawe said that the school’s most recent investment in Panasonic equipment — especially the AK-UC3000s and AG-DVX200 camcorders — will future-proof the program for another 10 years and support an eventual move into 4K production.

Rawe added that, as the video producer for the high school’s sports stadium, he is also deploying Panasonic AJ-PX380 AVC-ULTRA should-mount camcorders to cover up to 20 football games a year.

Digital Resources, Southlake, Texas was responsible for the design and installation of the equipment at Northwest High School.