UFC has opened UFC APEX, the new, 130,000 square-foot production facility in Las Vegas. The building, which contains more than 50,000 square feet of production space and over 70,000 square feet of office space, officially opened its doors on Tuesday, June 18, by hosting its first event, the season three premiere of Dana White’s Contender Series. 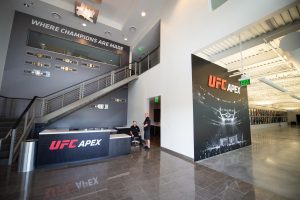 “UFC APEX is going to be a massive game changer for combat sports and for UFC,” said UFC President Dana White. “This facility gives us the flexibility to try new things and push the envelope on producing and distributing combat sports all over the world. We are limited only by my imagination. When you think of where we started and where we are now, it’s pretty incredible, but we haven’t even scratched the surface of how big this will become.”

UFC APEX has built-in, advanced production capabilities with an arena space that can be configured to accommodate a variety of live events, including other sports competitions, concerts, stage shows, esports tournaments, and more. The arena can also be converted into a sound stage for use as a rehearsal space for entertainment acts booked throughout Las Vegas.

A new IP-based control room will be installed in UFC APEX in 2020 that will allow UFC to produce live events remotely from any location in the world and broadcast them in 4K resolution.

“With UFC APEX, we’re future-proofing the way we produce and distribute our content,” said Craig Borsari, EVP, production, UFC. “The combination of the state-of-the-art technology, with this enormous highly configurable arena space, gives us the opportunity to host other live events beyond combat sports. UFC APEX allows us to branch out into creating other forms of in-demand sports and entertainment content and distribute them anywhere in the world.” 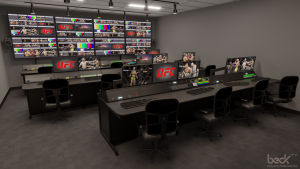 In addition to the primary arena space, UFC APEX will also feature a smaller 50’ x 50’ sound stage that can accommodate a variety of smaller productions, including live pre- and post-event studio shows, and original programming that can be distributed on a variety of platforms, including UFC FIGHT PASS.

The remodeling of the building includes the following enhancements: